SALUTE THE GREAT CONTRIBUTION OF COMRADE SONA SINGH SUNAM, WHO FOR 50 YEARS SHIMMERED THE SPIRIT OF NAXALBARI AND MAOISM IN PUNJAB.MAY HIS NAME BE ENGRAVED IN LETTERS OF GOLD AND HIS SPIRIT BE RESSURECTED. LEFT NO STONE UNTURNED IN OVERPOWERING REVISIONISM

By Harsh Thakor
Immortal Comrade Sona Suman for 52 years illuminated the torch of Naxalbari. Faced severe torture but rose like a from the Ashes from the deepest depths of despair. He played a major role in steering the activities and shaping the Krantikari Pendu Mazdur Union and all the democratic movements condemning Operation Greenhunt and Hindu Fascism. A major architect in the successful homage programmes for late Comrade Shamsher Singh Sheri, Earlier before 2003 an activist of the Lok Morcha Punjab and a mass activist of the Central Team Group of Communist Party India (Marxist Leninist). Sunam consistently played the role of a catalyst in all major democratic events and with utmost zeal defended the Maoist movement in Dandkarya, A great inspiration for younger cadres who he nurtured like flowers growing. Today around 450 people converged at his homage meeting at Sunam village shimmering the red spark of resistance at its crescendo. A most qualitative memorial meeting was held in Sunam in igniting the spark of anti fascist resistance with speakers highlighting the movement opposing the National Register of Citizens (NRC) and Citizenship Amendment Act (CAA). It is this very spark Comrade Sunam galvanized all his life in inspiring people’s movements. The most qualitative resistance of the Krantikari pendu mazdoor owes a lot to Comrade Sunam and the rise of student and youth cadre.

Tragically he perished in a road accident on February 10th.He was 71 years old

He may have departed but his soul lives on as a beacon to enable new red roses to be resurrected and bloom in the dark hour of fascism. 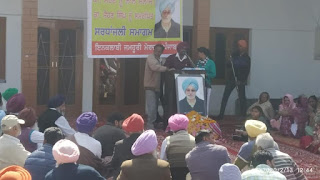