By SJ Otto
My wife, Cam Gentry and I have always taken an interest in women’s rights and women’s organizations. My wife and I met at a National Organization for Women’s Halloween party. So I was very interested in the Federation of Cuban Women that Caravanistas visited on July 1.
When we got there we were met by Mireya Moliva Castellano and Hidolidia Cameo Rodriguez, leaders of the chapter we met at. The two work out of an office that looks more like a home or apartment. 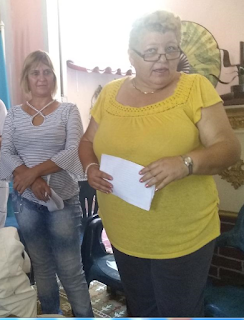 Almost all communist or Marxist parties in the world have a women’s group either within their organization or have connections to a women’s group. So it was no surprise that the Cuban government has a women’s group set up to take on women’s rights. It was formed just after the end of the revolutionary war.
One thing that Women’s groups do is to help women enter the work force. This was emphasized during the presentation we were given. We were told that women gain autonomy when they join the workforce. It gets them out of the home. So job training programs and professional women who can teach them are offered to women in any part of the country. Many women belong to this group which is spread out to furnish each community’s needs from block to block.
The Federation provides assistance for women and families in the district. Each district in has a chapter.
Before the revolution, women where encouraged to just stay at home or in the kitchen. Now they have their choice as to what kind of work they choose to do.
Other services the group takes care of include programs for parenting, and daycare. The group is involved with domestic issues, such as domestic violence.
The Federation was deeply involved in the 1961 Cuban Literacy Campaign.
Some of the stated goals of the Federation are:
The Federation has a group of women who knit toys that are sold to raise funds for the Federation.
As stated earlier, such groups are necessary to fulfill the needs of women in any society. Just as we have such groups as NOW, in the , has its women’s needs met by the Federation of Cuban Women. 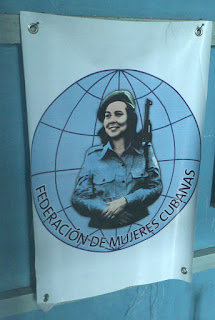