US arrogance failed to bully Maduro out of Venezuela

From The Idiot Factor:
The under President Donald Trump, has worked hard to try and remove President Nicolás Maduro, of , and replace him with a puppet regime under the leadership of  Juan Guaidó. Guaidó has never been elected president. Originally Maduro was elected president several years ago.
Several months ago, Trump tried to foment a coup, hoping he could persuade the military into rebelling against Maduro. So far it has not worked.
To punish Maduro and all of , trump put sanctions on the country, trying to choke Maduro's socialist regime. Trump hates socialism and seems to believe he can overthrow the regimes in , and , with sanctions being his main weapon.
Now, according to Vox news:

"President Donald Trump issued an executive order on Monday that freezes and blocks the transfer of all Venezuelan government property and assets in the ; importantly, the sanctions apply not only to Maduro’s government but also to any individuals or entities that try to do business with it." 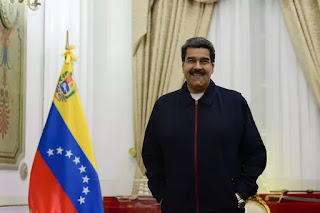 This whole policy is nothing more than pure arrogance on the part of the . The has no right or authority to demand that an elected president of a country resign or step down. Much of this is just prejudice against country for not embracing capitalism. I have just returned from a trip to where I saw first hand a socialist and Marxist country. That system worked, despite having an embargo against it, which is nothing more than an attempt to economically strangle that nation. The , under Trump, wants the world to believe that socialism doesn't work and socialism has ruined the economy in both and . But the truth is the sanctions have prevented both countries from getting badly needed foods and medicines. The results of these sanctions and or an embargo punish the average citizens. They are the ones who can't get the food or medicines they need. These people go without their needs met due to The US' attempt to end these non-capitalist systems.
It should be pointed out that Trump has the backing of all Republicans and most Democrats. So this is not an issue that is being debated in congress, with the exception of just a few Democrats such as Ilhan Omar.
imperialism is alive and operating in all of . The CIA, in recent years, has helped right-wing pro-US governments getting elected to replace the governments that were more nationalistic, trying to gain control of their own resources.
This arrogance is mainly to protect greedy $millionaires and $billionaires such as Trump, as well as other well paid journalists, pundits and politicians who profit well off of the capitalist system, at the expense of many working poor people. I have seen socialism at work in . The main opposition to it is by greedy wealthy people who believe they deserve privileges that socialist countries don't grant them. In other words this is never been about human rights. It is about political leaders who believe they have a right to be rich and greedy.
An irony here is that some government experts don't think these new sanctions will do much good. According to The Guardian:

"The time for dialogue is over. Now is the time for action,” declared, spurning Norway-sponsored negotiations that have been taking place between representatives of Maduro and his US-backed challenger, Juan Guaidó.
But experts questioned the impact and wisdom of the measures, which Maduro’s administration and its Russian backers branded “economic terrorism”.
Some fear the latest sanctions will further aggravate an already dire humanitarian situation which has already forced millions to flee Venezuela, while others believe they will alienate Guaidó’s European backers who believe a negotiated solution is possible.
Christopher Sabatini, a senior fellow for at the Chatham House thinktank, said Trump’s latest gambit was designed to achieve nothing but Maduro’s immediate downfall.
“This is intended to bring this government to its knees and to bring in Guaidó. That’s it … But it will not work. It will actually make Maduro’s government what it always wanted to be: a martyr,” Sabatini said.
Farid Kahhat, a professor of international relations at Lima’s Catholic University, said that while Maduro was to blame for Venezuela’s economic meltdown, “what the US is doing is making things worse – at least in the near future”.

Trumps' attempts at regime change may not work after all. Stamping out socialism is turning out to be harder than Trump thought it would be. Trumps efforts deserve to fail. The has no business deciding who can and should run the nations in . A triumph for socialism is a triumph for poor and working people. Such people deserve to win, especially after years, decades and centuries of being servants of the wealthy minorities.
Posted by SJ Otto at 1:20 PM