By Harsh Thakor
HISTORY MADE IN MALERKOTLA IN MOVEMENTS CHALLENGING RELIGIOUS FASCISM REMINISCENT OF A HUGE TORRENT STORMING IN OR A HUGE ARMY MARCHING INTO THE CITY OF . THE SPARK OF REVOLUTIONARY RESISTANCE AGAINST SAFFRON FASCISM SHIMMERED AT ITS CRESCENDO. TRIBUTE THE METICULUOS GRASSROOTS WORK,PLANNING AND DETERMINATION OF THE DEMOCRATIC MASS ORGANIZATIONS.

The spirit of resistance against the ascendancy of saffron fascism unleashed through National Register of Citizens (NRC) and Citizenship Amendment Act  (CAA) has been shimmering the state of like a spark turning into a Prairie Fire. Above all it has mobilized every democratic section of the people be it the peasantry, landless agricultural labour, industrial workers, government employees, women, students or youth. There are of course divided trends within the revolutionary camp but all with equal zeal are confronting the monster of NRC and Citizenship Amendment Bill  (CAB) which are entrapping the entire nation like fascist noose strangulating it, putting the lives of the Muslim minority in peril as never before. The secular and anti-Hindutva spirit is at its crescendo in with wrath literally written on the faces of the Punjabi masses against the vampires.

On February 1st at Malerkotla we witnessed a historic day in the struggle against the tyranny of religious fascism, with one of the most qualitative protests ever in the history of revolutionary movement for secularism in . It was a tribute to the meticulous preparation and practice of mass line. Thousands of farmers & Muslim women thundered in like a huge army or lightning striking to invite for success of 16th Feb. massive protest rally against CAA, NRC and National Population Register (NPR) Malerkotla (). Nearly 20000 women coming from Muslim & farmers families today organized a massive "invitation march" under the banner of B.K.U. (ekta-ugrahan) for the success of a huge protest rally to be organized here on 16th February by over a dozen struggling mass organizations of Punjab against CAA, NRC and NPR. Thousands of women from all over after gathering here in the grain market and marching towards the town under the leadership of Harinder Kaur Bindu State Leader of women wing and Joginder Singh Ugrahan State President of the farmer organisation, reached the Sirhindi Gate of the town. They were warmly greeted by thousands of local Muslim women lead by Shagufta and her companions from Jamat-e-Islami Hind, Zarka Zaafri and different Muslim organizations waiting there. When this joint procession of nearly 20000 women wearing 'basanti' dupattas &  burkas  advanced in the bazaars of Malerkotla to invite local people to join the proposed rally and protest march on 16th February, it appeared like a basanti coloured flood of women power. Shouting sky rending slogans "Hindu, Muslim, Sikh, Isayee, saaray kirtee bhai bhai", "Bhai nal bhai larren nee dena, sun santaali banan nee dena" and holding photos of Shahid Bhagat Singh and banners of slogans of communal harmony/unity this massive, disciplined and enthusiastic march of women was also conveying a massage to defeat the foxy moves of Bharatiya Janata Party (BJP) government dividing people of our country on communal basis. This massive gathering was addressed at some places in the town by Harinder Kaur Bindu, Harpreet Kaur Jethuke, Baljeet Kaur, Parmjit Kaur Pitho and Paramjit Kaur Kotra. They hailed the steps of Muslim community especially their women for coming out openly in the field of struggle to defeat the vicious plans of Narendra Modi government to disrupt communal harmony of the working people by imposing CAA, NRC & NPR throughout the country. They said that this undeterred resistance by the Muslims strongly supported by the students' protests, intelligentsia and democratic forces of our country has once succeeded in defeating the vicious moves of the rulers to ignite communal riots between Hindus & Muslims. They highlighted that since 1947 whenever the rulers succeeded in spreading such riots, the women of our society had to bear the most dreaded consequences of it. The women leaders stressed that linking the citizenship issue with religion, CAA deeply violates the secular and democratic values. It especially targets Muslims to deprive them of all types of citizenship rights. While strongly condemning the brutal repression being let loose over peaceful protesting people along with students of J.N.U. and Jamia Milia University they said that these repressive steps of BJP government are part of their vicious plans to establish Hindu Rule all over the country. They said that apart from Muslims, Dalits, Advasis, other minorities and all working people are the targets of this communal fascist attack. They stressed that the purpose behind this Hindu Rashtra Plan is not the welfare of total Hindu community; rather it is to establish such a backward regime where all the human rights of working people of all communities including Hindu workers will be crushed. They said that Modi government is diverting the attention of the working people from brutal excesses on women, rampant unemployment & soaring prices, farmers debts/suicides and economic disaster by imposing communal fascist mobilization and blind patriotism. Thus by pushing the country into the fire of communal riots Modi government wants to sell all public sector entities along with all natural resources like water/land/forests to imperialist corporates by imposing more draconian labour laws. As well as by imposing heavy taxes and more repressive black laws on all the working people of the country. But they emphasized that the women and other working people of our country have now awakened, who will not allow such plans of Mode govt. to be successful. They demanded repeal of CAA, NRC and NPR, arrest all the culprits of murdering 39 Muslims and injuring hundreds including students by police and RSS/BJP gundas. They invited all residents of Malerkotla & surrounding areas along with whole of Punjab to rise above religious & caste differences and reach in Malerkotla on 16th February forming long convoyees in order to fight unitedly against these vicious plans of Modi government Apart from other activists state representatives of B.K.U. (ekta-ugrahan) Sukhdev Singh Kokri Kalan, Jhanda singh Jethuke, Hardip Singh Tallewal, Zora Singh Nasrali, Lachhman Singh Sewewala (Punjab Khet Mazdoor Union), Hoshiar Singh Salemgarh (PSU-Shaheed Randhawa), Srishati (PSU-Lalkaar) were also present there.(Report from Sukhdev Singh Kokri Kalan 9417466038) 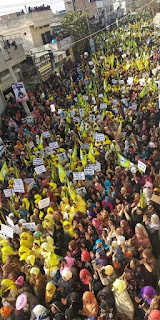 In Patiala and Sangrur the anti-fascist front has been exhibiting many marches, seminars and cultural programmes condemning NRC and CAA.The most impressive resistance has been depicted by the Punjab Radical Students Union who inspite of limited cadre have dug deepest amongst students groups to instill secular revolutionary political consciousness .Some radical protests have been undertaken in around 50 villages in Sangrur area by Punjab Radical Students Union and Naujwan Bharat Sabha(Punjab)like in Chajli, Namol. Dhuri etc.I n meticulous depth the students explained the fascist nature of the NRC and CAA in terms of it completely striping the minorities of their basic rights. Around 50 people assembled for their meetings organized. A Candle light protest was organized at Sangrur Bus Stand .The anti-fascist front comprising groups like Lok Sangram Manch, Inquilabi Lok Kendra, Communist Party India(Marxist Leninist) Liberation, C.P.I.(M.L.) New Democracy etc held a significant convention in involving around 300 persons, with significant intervention of the medical students Association. We witnessed some of the most heart touching moments with villagers assembling together giving full fledged moral support to their Muslim brethren who in turn looked as though a new life was infused into them, after seeming dead and buried in spirit a short while ago. Also a very qualitative women's march was organized by the Krantikari Pendu Mazdoor Union in Sangrur.Lok Morcha Punjab also conducted important educational seminars. in . The Punjab Khet Mazdoor Union held a march in Muktsar district while Punjab Students Union(Shaheed Randhawa) held meeting at tin Bathinda to Mobilize cadre for protest on February 16th.


The revolutionary camp in remains divided on issue of doing joint programme with nay political party and thus constituents of the Anti-fascist front will support the Malerkotla Protest on February 16th but not be a formal part of the front formed of the conference. The main objection of organizations like Bharatiya Kisan Union(Dakaunda and Ugrahan) or Punjab Khet Mazdoor Union are allying with opportunist forces like revisionist left parties. Organizations like Lok Sangram Manch, Revolutionary Peoples Front and C.P.I.(M.L.) New Democracy feel that the united front against fascism should be broad and should include liberal opposition who are vocal against saffron fascism.

On 16th February we could expect a new glorious chapter written in the central protest at Malerkotala in the revolutionary movement against Hindu fascist religious tyranny,. We must give credit to sections of all contingents of the revolutionary camp for striking the fascist poison at its very roots, who have set a shining example to the whole of the nation. 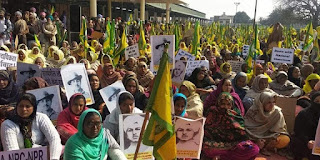