From http://www.groups.yahoo.com/group/MAOIST_REVOLUTION
NPA Eastern Visayas (Efren Martires Command)
The Efren Martires Command of the New People's Army-Eastern Visayas said today that guerrilla offensives in Western Samar are stepping up since June against the 8th Infantry Division's Oplan Bayanihan implementation. "The successful NPA offensives counter the 8th ID's search-and-destroy operations in the countryside under Oplan Bayanihan, which division commander Gen. Mario Chan disguise as "peace and development" operations," said Ka Karlos Manuel, EMC spokesperson. "Oplan Bayanihan in Samar has strikingly meant intensified military presence riding on road projects funded mainly by the US. In fact, these infrastructure projects are indirect attacks on the people by being principally meant for facilitating the military's search-and-destroy operations against the NPA that often give rise to human rights violations. Moreover, such projects will not solve landlessness and poverty in the absence of comprehensive socio-economic reforms under the Aquino government."
Manuel gave details on the following NPA tactical offensives in Western Samar:
June 6. Brgy. Diit, Matuguinao. Red fighters of the Serafin Pacimos Command harass a unit of the 87th IB, killing three soldiers and wounding one. The NPA had no casualties.
June 26. Brgy. Lawaan, Paranas. An NPA special operations unit punished Bolontoy Sosing, an important intelligence asset of the military. Smarting from their loss, the military today continues search-and-destroy operations in the area in the vain hope of retaliation.
July 13. Brgy. Lagundi, Catbalogan. Red fighters raid the sub-provincial jail and disarm the four jail officers on duty. Confiscated were one 9-mm. pistol, a .38 revolver and a .38 pistol, along with ammunition, two laptop computers, uniforms, bags, and other equipment. The Red fighters did not indiscriminately fire as claimed by the police, but an accidental discharge hit one of the jail officers who had surrendered, for which the NPA apologizes.
July 20. Between Brgy. Concepcion and Brgy. Canligues, Paranas. Red fighters of the Arnulfo Ortiz Command ambush a military convoy heading for San Jose de Buan. One soldier was confirmed killed and many others wounded. There were no casualties on the side of the NPA. Confiscated were one K3 machine gun, two M16 rifles, three .45 pistols, and ammunition: 400 K3 rounds; 1,950 M16 rounds; 526 M14 rounds, and one box of mortar rounds. Also seized were ammunition belts and magazines, military uniforms and bags, documents of high intelligence value, and other equipment. The NPA used command-detonated explosives, not landmines as alleged by Lt. Col. Niceforo Diaz, Jr., chief of the Civil-Military Operations Battalion, in falsely accusing the NPA of violating the Comprehensive Agreement on Respect for Human Rights and International Humanitarian Law. The weapons and ammunition confiscated from the soldiers also show them to be ready for battle, rather than for a "peace and development" mission with their infrastructure projects in San Jose de Buan and nearby towns.
Karlos Manuel
Spokesperson
Regional Operations Command 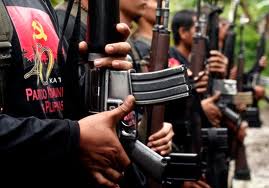 Payday loans online http://www.legitpaydayloansonline1.com Fundpopog Payday Loans Online Stype [url=http://www.legitpaydayloansonline2.com/]Payday Loans Online[/url] online payday loans When the loan comes due, make sure that you sure as identification such and will be able to pay back the money.If you have the above, you may get a a credit credit, that you can get more financially strapped.

I every time spent my half an hour to read this web site's posts daily
along with a mug of coffee.

Here is my web site; how to get your muscles ripped

Hey there! Someone in my Myspace group shared this site with us so I came to look it over.
I'm definitely enjoying the information. I'm book-marking and will be tweeting this to my
followers! Great blog and fantastic design and style.

Feel free to surf to my web blog ... Live Jasmin

I really don't mind that some people leave spam messages for their personal business ventures. I prefer messages about the content of my blogs. But the spam really doesn't negatively affect me.
There is one exception and that is for Payday Loans. That operation is a legal form of loan sharking. It feeds on the ignorance of some poor people and such loans make victims out of poor people.
Payday and other lending Predators are criminals and belong behind bars. I just want to remind my readers that such businesses are legal but morally bankrupt. They are SCUM...

Just apply the milk on your scalp and tie a towel or
some cloth around your hair to prevent loss of the milk from your hair.
Though this oil is rich in saturated fats, it is still ideal for
cooking. People often make a mistake and only apply oil
on the hairs while massaging head with coconut oil, hairs cannot absorb any thing
hence massaging hairs can only make them shine temporarily but cannot nourish them, for proper nourishment one needs to massage the
scalp as hairs take all the nourishment from their roots which are
located in the scalp.

I really like your blog.. very nice olors & theme.
Did you make this website yourself or did you hire someone to ddo it for you?
Plz respond as I'm looking to design my own blog and would like
to know where u got this from. many thanks

I've been working on this site myself in my spare time. The system is pretty easy to learn. I just went through trial and error.