How the Great Proletarian Cultural Revolution transformed a Chinese University

I like to provide writings on the Great Proletarian Cultural  Revolution of China (伟大的无产阶级文化革命). The campaign itself was not really very successful and the reason for that is that it was not well understood by those it was intended to help and those asked to participate in it. The idea behind the GPCR was to advance class struggle and fight class differences and prejudices. As with the US Civil War, intended to end slavery, and the Civil Right movement of the 1960s—these movements meant that some classes would gain new liberties while others would lose class privileges. The loss of privilege has never been popular anywhere in the world. However, liberation to the downtrodden classes can only come with the losses of privilege of others. One problem with the bourgeoisie propaganda and explanations of the GPCR is that they never explain it at all. They usually describe it as a Stalin-like purge and fill their pages with horrible antidotes designed to make the GPRC look like some kind of horror show.
The following article is a good explanation of the GPCR. So I am posting this article here for serious explanations of the GPCR.
-សតិវ​អតុ

The following has been translated by Google;

We have no intention of drawing a historical description of a phenomenon unique cultural revolution in the socialist world, but as with Maoist political line.
(...) Our view is contrary to that of many Western commentators who claim that cultural revolution started from above, and thereby deny all spontaneous origin to that movement. In our opinion, there are a number of signs that show the opposite: first, the publication rather late in August 1966, official directives as the "Decision regarding the great proletarian cultural revolution in sixteen points" when criticism violence had begun a year earlier. And, moreover, considerable freedom of action of the Red Guards in that vast country. The central decisions were limited to the ideological line. (...)
The cultural revolution in the university field entry was made on the political background and only later on the constructive aspects. It was necessary to start with the analysis of the role of the university in society, know what makes the authority in establishments, to form that kind of people, before rebuilding a model of new type. The criticism expressed by female students are symptomatic: "... A large number of students have been severely indoctrinated by reactionary ideas of the exploiting classes such as" the race of letters is the only honorable "," build a reputation "," become experts "," their way "(...) etc. The current examination system favors the spread of these ideas (...) Many schools are concerned unilaterally schools have a large proportion of students admitted to colleges and for this reason many become "special" schools, "key" that only admitted to the "outstanding students". Schools have opened the doors wide to those who only care about the books and pay no attention to politics, but have closed a large number of outstanding children of workers, peasants and revolutionary cadres ... "( 1).
It is clear from this letter the emphasis on moral and ideological education. The schools in revolutionary times want to serve the people must politicize and ideologize a large part of the course materials detriment of smaller immediate value, for example, the second foreign language. After the abolition of the examination system taken from the Russian model appears, reducing the selection and too narrow specialization contributes to favor the creation of elites, and then is expanding access to schools for workers and peasants world, which already we referred. A means of allowing the increased number of students has been to reduce the number of mandatory school years cycles of primary, secondary and final, partly occupied by temporary work programs. It seems obvious that this decrease lowers the level of studies, but in this vast country is essentially provide a quantitative statement. In that sense, a reduction of schooling for a minority long term lets increase the overall level of the entire population.

It follows: (1) a more egalitarian stratification (humanistic aspect); (2) the minimum education necessary for the modernization of agriculture and industry (economic aspect); (3) an interaction of both. You can check the unanimous agreement of observers and sinologists as to the finding of effort in this area and achieved success. E. Snow said: "Having visited numerous primary and high schools, middle, have come to the conclusion that no nation has achieved so quickly release the masses of illiteracy and millions of beings instill knowledge of scientific technique and industrial. (...) In all areas of advanced studies have already tax comparable to those of and the West standards. " (2) wrote that in 1960, ie, exactly eleven years after taking power in a country of the most backward in the world, comparable to Russia in 1917, but much more late in 1949 that India currently.
(...) From this perspective, accusations university mandarins during the Cultural Revolution, tending to impede the restoration of bourgeois role of university elites' -training and move forward creating theory-praxis units, which would join the struggle understood classes, the struggle for production and scientific experiment. The first stage of this triptych was the participation of students in the crafts of the communes and industry. To this end, the academic year comprises several months of manual work. But the claims of a real relationship between workers and students need a new way of University, the involvement of students in rural work does not change its root the institution that is the university, for the direct connection fails. Testing programs to ensure that students, then the pictures, do not constitute a privileged layer are numerous. For example, "over a hundred people in the , have been sent by computers to do research and studies in the fields and factories in August and September this year. Based on his research, he has developed an audacious proposal to reorganize the , and turn it into a new institution, in a commune. It shall consist of a university, a construction section and a research center, bringing together three functions: teaching, research and construction. " (3)
These attempts prove a fierce will to get rid of the old type of separate student of the longer run also the only manual laborer, towards each other masses. (...)
Notes
(1) Cahiers de la Gauche prolétarienne, No 1, Paris, April 1969, p. 71.
(2) E. Snow: La Chine en , Stock, 1962, p. 168.
(3) Cahiers de la Gauche prolétarienne, ob. cit., p. 82. 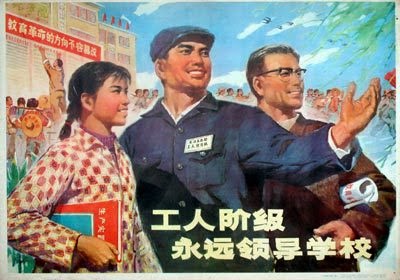