ENOUGH IMPERIALIST EXPLOITATION! IT MUST END!

The following article is interesting. As we all know the empire is drunk with power —military power, economic power, technical power and there is little, if anything, to oppose it.
Not since the Roman empire has one country so thoroughly dominated the world as the does today. Even the had its limits. Today, the runs virtually every corner of the Earth in one way or another. Right now the government is demanding that Bashar al-Assad, of , step down. On what legal authority does this government have to make such a demand. No one in ever voted for a president. And yet the has veto power over a sovereign country. The simply states what it wants and then tries to implement it. There has been no debate in the . President Barack Obama simply decided that this is what is best in .
When the end of the cold war came in 1992, the one remaining obstacle to the empire died. Up until that year a small third world country could chose between development aid from the / Europe or the . While both sides promoted their economic systems neither relied on those systems for alliance. Many non-parliamentary systems with absolute dictators allied themselves with the . Other times parliamentary system governments allied themselves with the .
Since the Soviet Union fell there is one and only one place for a small country to get development aid and that is through the  or . There is no longer any competition and the now makes unilateral decision on countries all over the world base only on the wants and desires of its empire.
Logic would require a winner in the cold war to ask why such a conflict ever arose. After all, why did Marxism take hold on  What conditions were so bad that a completely new revolution was needed to fix them? And that leads to the obvious question "are such conditions fixed today?" "Is there no need to question the wisdom of imperialism?"
Today's modern imperialist system has determined that there is no reason to question the superiority of capitalism and imperialism. There are no public debates over the role in today's empire by anyone in the mainstream news media. The debate is settle according to our news media pundits. The won therefore whatever it decides is both right, is legal and it will be implemented without hesitation.
The following article is absolutely right that imperialism is degrading to humanity, it is brutal and it is completely unfair. That being said, the next step is to bring it down. It is the right thing to do, but not an easy thing to do—not at all. - សតិវ​អតុ
Here is a lead-in to  Verein Der Neuen Demokratie- Deutschland's

Notes on the International Situation:

ENOUGH IMPERIALIST EXPLOITATION! IT MUST END!
“Finally now, listen to this. As we see in the world, Maoism is marching unstoppably to lead the new wave of world proletarian revolution. Listen well and understand. Those who have ears, use them. Those who have understanding -- and we all have it -- use it! Enough of this nonsense. Enough of these obscurities. Let us understand this. What is unfolding in the world? What do we need? We need Maoism to be incarnated and it is being incarnated and that this generate communist parties to manage, to lead this new great wave of the world proletarian revolution that is coming. Everything they told us, the empty and silly chatter of the famous "new age of peace." Where is it now? What about ? What about other places? Everything became politicized, that is a lie. Today there is one reality, the same contenders of the First and Second World War are preparing a Third World War. We should know this and we, as the children of an oppressed nation, are part of the booty. We cannot consent to this! Enough imperialist exploitation! We must finish with them! We are of the third world and the third world is the base of the world proletarian revolution, with one condition, that the Communist parties brandish and lead! That is what we must do !!”


With this guide, in these notes, we expound in an open and constructive manner the key issues regarding the present problems within the international communist movement. Issues on which there is not a unified comprehension, indispensable for the common action in defense of Maoism and its application to each specific revolution. This is, to initiate and develop people´s war in each country. To that end, we address the most pressing issues of the world today. Before proceeding, it is necessary to point out that these notes correspond to how we have been following the development of the main contradiction and the inter-imperialist contradiction (third contradiction) during the year 2013 until September-October. After this date we have only added a reference to the “Ukrainian crisis” in mid-January of the present year. We publish them with some delay because, despite of the time passed and that it does not cover anything that occurred since November 2013, it still conserves its validity. On the development of the second contradiction (proletariat-bourgeoisie), we will treat it in the next delivery of these notes.
For the rest click here. 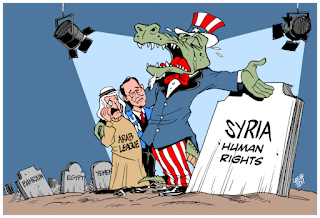 Pix from slideplayer.com.
Posted by SJ Otto at 3:08 AM