The argument over socialism vs. capitalism is as old as the theories of Marxism itself. By the time a Marxists is my age, he/she has heard all the arguments. The most damaging pro-capitalist arguments go that Marxism has led to some real tyrants and the Marxist system seems to be set up to let that happen.
-សតិវ​អតុ

We see that argument by Jonathan Chait blathering in the NewYork News and Politics:

It is on politics, not economics, where the influence of Marxist ideas has been most keenly felt. Enough time has passed since the demise of the to allow Marxist models to thrive without answering for communist regimes. In his fascinating profile of Jacobin, Dylan Matthews notes, “The magazine is not going to defend Stalin's collectivizations or Mao's Great Leap Forward or really any other aspect of ‘actually existing communism.’” But the fact that every communist country in world history quickly turned into a repressive nightmare is kind of important.

And Tyler Zimmer, of In These Times, tries to answer some of that:

Chait’s basic argument, as the title of his piece implies, is that “liberalism is working and Marxism has always failed.” The principal failure of the latter boils down to one fundamental flaw: “Marxist governments trample on individual rights because Marxist theory does not care about individual rights.” Hence, Mao, Stalin, Pol Pot… you know the rest of this tattered Cold War script.
Never mind that these authoritarian monstrosities had virtually nothing to do with what Marx himself said or did. There’s nothing to see here, Chait assures us, so it’s best if we keep moving and warm up to the status quo.

Zimmer is a democratic socialist not a Marxist. So let me make a few points here. Fist of all, the worst of these Marxist governments came about right after the first revolution in Russia, 1917. Since that time, Marxist world revolutions had been getting better at following human rights and US style liberties, towards the end of the cold war, not further away.
One example of that was Salvador Allende who became the first elected Marxist in the Western Hemisphere, in 1970. He followed all the rules on good government. He respected all of the the rights that are supposed to be respected in a Western style government. He respected the electoral process that got him elected. He did everything our modern Marxist students, as myself, have been told they needed to do to be more democratic if they wanted to be taken seriously by the US. But the reality is his government would never be acceptable to the US because they did not honor the "free market." And that free market is like the Bible to the US. If Allende and his supporters would not accept our economic system they had to go. President Richard Nixon and his henchman Henry Kissinger made that happen. Allende was replaced by a military coup led by Augusto Pinochet, a right-wing military dictator who shut down all democratic institutions and led the country as a police state, with no democracy or political liberties for almost 20 years. And he did this with the full blessings of the US. As we can see from that historical event, the US and its capitalist system is completely comfortable coexisting with undemocratic fascist systems of government. Capitalism simply does not need elections and political freedoms to function. And we also learned that the capitalist free market is way more important than all of the political liberties and democracy that are supposed to flourish under it.
In 1979 there was a Marxist revolution in Nicaragua. The Sandinista government provided its citizens western style liberties, including legal political parties, full freedom of speech, freedom of religion and they outlawed capital punishment. The US under then President Ronald Reagan waged a counter-revolutionary (Known as contra rebels) guerrilla war against that government. Despite all the freedoms and liberties Reagan used the CIA to train and finance war against them. It actually seemed as if Reagan and his supporters hated the idea of a Marxist liberal democracy. He was determined to ruin them. It is ironic that Reagan brought back the death penalty for the US at a time when his Nicaraguan opponents had outlawed it.
Then there was the Zimbabwe revolution, that included a multi-party system and independent newspapers that are still there today. There was also the FRELIMO government, under the leadership of Samora Machel, in . The government there had held elections, even though the government set up a one party state. Still there were contested elections for various political
positions, within that party. These governments were more just and humane than the usual pro-Soviet countries. And still the west waged guerrilla war against them.
We also can see throughout history that there have been capitalist governments that have come to power through tyranny and murder. The French Revolution was very bloody and the guillotine was used against those who opposed the bourgeois order in any way. Later we see military coups that brought down even mildly reformist governments, such as the coup in Guatemala in 1954.
All of those Marxist experiments came to an end when the cold war ended. The Soviet Union was repressive, China's communist government moved towards restoring capitalism and most of the other Marxist governments, as of today, have turned to socialist democracy in order to get badly needed development aid. A few such governments, such as Zimbabwe still exist, but that government is plagued by an aging and corrupted leader. For the most part the Marxist political systems have had their proverbial baby thrown out with the bathwater.

So we look now at Tyler Zimmer's argument against Jonathan Chit over the merits of socialism:

Polls consistently show that Americans under 30 view socialism more favorably than capitalism. This simple fact is a source of profound anxiety among liberal and conservative commentators alike. Some assure us that the affinity for socialism among the young is little more than a ruse to get laid. Others attribute the allure of socialism to youthful ignorance: if only they understood that the was something more than a “grim backdrop for bad action films,” they would never embrace such a “bad, old term.” The other version of this explanation is the “you won’t like socialism when you grow up and get a job” line which, of course, reveals an embarrassing lack of awareness of the fact that it is our country’s severe lack of decent jobs that is driving millions of people—especially young people—to embrace socialist ideas in the first place.
Whether coming from conservative or liberal commentators, however, all of these arguments share an underlying tone of frustration and indignation, premised on a dogmatic investment in the belief that capitalism is obviously best and socialism obviously wrong—so wrong, in fact, that it is offensive to even open a dialogue about its merits. 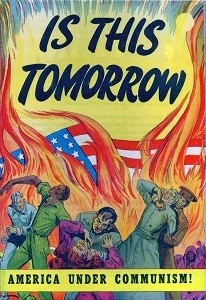