A few thoughts about Fidel Castro, who just recently died

“I am a Marxist-Leninist and shall be one until the end of my life.”[1]

I was raised in an anti-communist household so when I first heard of Fidel Castro, he was described as a dictator. "He was against freedom and democracy. He had taken over and ruined it," or so I was told. Well, I changed over time and I'm not longer anti-communist. 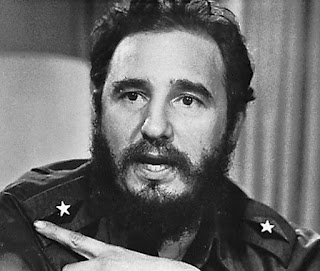 Still, my views of Castro changed over the years. In the 1970s I believed that Castro was a pro-Soviet stooge. I saw him, as others I knew saw him, as a revisionist and part of the Soviet Empire. And to be honest he was a dictator and not all that found of freedom or democracy. His newspaper, Grandma, often said "this is not a place for liberals." It was a place for Marxists and Marxists only.
But by the 1970s I realized he wasn't all bad. He supported Salvador Allende, the Marxist president who won an election in . It seemed ironic that Allende followed all the rules of the bourgeois democracy he came to power in. He never abused power. He was a benevolent ruler. And yet he and Castro were good friends while the Richard Nixon administration tried everything they could to get rid of Allende.
Years later he supported the Sandinista Revolution. That new government also respected bourgeois democracy, a free press (with a little censorship) and other freedoms. Once again our own president, Ronald Reagan, did everything he could to bring the Sandinistas down. Eventually they got voted out of office, but Fidel and his party still reigned in .
For all the other parties, politicians and guerrilla groups in , the Cuban revolution has stood alone. Some left-wing governments came and went, but Castro and his remained.
Even after the fall of the Soviet Union, Castro and his party defied all odds to keep a Marxist regime. Today, it still is. There is no telling how much longer Marxism will survive in its one last stronghold. But it is 2016 and the Cuban revolution is still there.
After the fell, I gained a lot of respect for Castro. Leaders in other Soviet Block countries scrambled to find favour with the west. But Castro stood his ground. For that I gained a lot of respect for him.
While his government falls way short of the kind of Marxist revolution I have hoped for all my life, it seems like a nostalgic breath of fresh air in a world run mostly buy right-wing jerks. Today Daniel Ortega is president of again, even though the country is not the Marxist paradise many of us wanted to see in the 1980s. We have the  "Bolivarian Revolution" in such countries as , even though it may not last much longer.
Castro is one of the last of the old cold warriors of the 20th century. He has outlived John Kennedy, Nixon, Reagan, Nikita Khrushchev and Leonid Brezhnev. There may never be another Fidel Castro. He deserves to be remembered for all the good he did, despite his faults.


[1] And he did stay a Marxist-Leninist until the end of his life. History Channel; http://www.history.com/this-day-in-history/castro-declares-himself-a-marxist-leninist
Posted by SJ Otto at 4:37 PM

At least Bob Avakian is still going strong.
You really need to get with it.