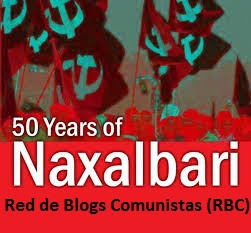 By Harsh Thakor
One of the hardest debates today is whether to recognize the formation of the 1969 C.P.I.(M.L.) Till 2004 the C.P.I.(M.L) peoples wra hands down upheld it and classified de-recognizing as counter-revolutionary.This was the stand of the Central Team of the C.P.I.(M.L.).Erstwhile groups like the Maoist Communist Centre and Unity Centre of Communist Revolutionaries of India did not uphold it. The principal reason for these forces to reject it was the left adventurist line abandoning mass organizations and not recognizing the converging revolutionary forces around it.Comrade T.Nagi Redy and D.V.Rao were expelled from the All India Coordination Commitee of Communist revolutionaries.
They opposed boycott as a strategic slogan and the calling China's chairman our chairman.Later after the 1970 formation comrades like Souren Bose and Sushital roy Choudhary attempted to combat this line of Charu and to some extent Suniti Kumar Ghosh.We have to analyze whether it's formation had some beneficial aspects.For instance the role it played in expanding or giving life to the Srikakakulam movement before it was beset by left adventurism.
It also shook some plain regions of Bihar and Uttar Pradesh as well as inspired youth in Punjab.Probably without it's inspiration Andhra Pardesh Radical Students s Union in 1973 and Virasam in 1970 would not have been formed,even if the party line officially called for ban of mass organizations.Kondappal Seetharamiah himself was a member of the C.P.I.(M.L.)Morally T.Nagi Reddy or D.V.Rao did not advocate stages theory and were preparing an area to create armed struggle.Left adventurism thwarted their bid to created people's armed struggle.
Whoever tried to separate Charu Mazumdar from Naxalbari, had practically separated themselves from the path of Naxalbari.
In this essay I wish to reflect on his positive contribution and critically portray his stature.
Charu Mazumdar was the pioneer in demarcating from Khruschevite revisionism and upholding the torch of Marxism-Leninism-Mao Tse Tung Thought(now Maoism).This year we commemorate 50 years since Charu Mazumdar started writing his famous 8 documents in 1965.They Sowed the seeds for the line and formation of the re-organized Communist Party.

In 1965,he wrote his first five documents.

In the view of he new organization

"The Central Leadership of the C.P.I(M.L)failed to resolve correctly certain questions of policy regarding mass line ,military line and style of work. Instead of devicing correct CT Marxist Leninist policies in the light of objective analysis, the cental leadership started divicing such policies subjectively. Consequently our revolution receive setrbacks.The Central leadership gradually deviated from the very ideological foundation of the party.
They revealed a sectarian, individualist and bureaucratic trend. The failed to mobiles all the sincere C.R's in he party,through ideological persuasion and political struggle. Although the 8th Congress of the C.P.I(M.L),boldly drew a clear line of demarcation between Marxism and Revisionsism, upheld the correct general orientation and path of Indian Revolution, yet adopted certain left adventurist policies on the questions of mass and military line.It asserted that mass struggles and mass movements wee indispensable and that the principal contradiction was that between feudalism and the broad masses.
It is significant that later in their April 1993 issue of Liberation they wrote, 'The C.P.I(M.L) had failed to understand the significance of consistent struggle of ideological, political nature within the party and outside for further quantitative and qualitative consolidation of revolutionary forces in and around he C.P.I(M.L)Early success led them to sectarian politics and organizational authoritarianism.They failed to realize the significance of consistent struggle in each and every activity of party leadership brought forth from C.PI.and C.P.M. Revolutionary broadness and flexibility was replaced by authoritarian principles .The leadership failed to realize the dimension of the converging process of revolutionaries in and around the party. Opportunist onslaught within the party gave rise to organisational centralism.
The Central Team however upheld the formation of the C.P.I(M.L)in 1969.Quting their journal, "The heroic ideological struggle through concrete actions leading to armed agrarian upsurge by the peasntry ,the main force of revolution gave birth to the re-organised Communist Party-the Communist Party of India(Marxist Leninist)In 30 years the party has split into several fractions.Some of them claim to be he party while others operate as part of the paty.Many Communist revolutinaries are divided in these gropups.
There has been failure of Communist Revolutionaries to evaluate correctly the original/correct formulation on which the structure of he party was built.The time is most suited for the true communist Revolutinaries to merge with he whole.i.e.with the "C.P.I.M.L". and form the centre to take up the responsibility of the Indian Revolution which is New Demoratic and principally an armed agrarian revolution.
We must establish the monlolithic Centre of democratic centralism which was lost after 1972.9
When the original C.P.I.M.L disintegrated)The All India Revolutionary Centre(re-esatablish the 8th Central Committee) of the party must be re-established."
The above document is significant as there was once a conflicting viewpoint on thr formation of the party in 1969.Groups like Peoples War Group,Party Unity or C.R.C upheld it unchalengingly,while factions like Maoist Communist Centre ,Chandra Pulla Reddy Group,U.C.C.R.I.(M.L0' OF Nagi Reddy opposed it. Today the C.P.I.(Maoist) concludes that there were 2 founding parties the and the Charu Mazumdar led C.P.I(M.L).
Significantly the erstwhile Central Team of the C.P.I.(M.L.) which upheld C.M. critically merged with the C.C.R.I in 1994 which upheld the line of Nagi Reddy. into the C.P.R.C.I.(M.L. )Like Maoist Communist Centre steams remained outside the C.P.I.(M.L.) like the Chandra Pulla Reddy or Nagi Reddy factions but that does not mean we downplay the validity of the historical role played by Charu Mazumdar.
We must be critical of the sectarianism of the C.P.I.(M.L) of 1969 in preventing other Maoist revolutionary forces from joining it and endorse the views of T.Nagi Reddy ,D.V.Rao etc on it’s major errors.