US Imperialist's lies go unchallenged by US mainstream media

By សតិវ អតុ
From almost anywhere in the USA, people sit comfortably in front of their TVs and digest a steady flow of lies and propaganda that is so cleverly sown together that very few of our citizens every question what they see.
Our mainstream news media is strangely devoid of any discussion or debate over the so called "war on terrorism." About a fourth of the commercial we see include praise for those in our military who are "keeping us free." The actions of our military do involve great sacrifice by these brave men and women, but it is all for the wrong reason and heavily miss-guided. And all that military praise is no longer just in the commercials. Soon we will have a TV show Seal Team, which premiers Wednesday, Sept. 27 9/8c. We can easily tell that this show will glamorise the imperialist special troops this country uses to rob the people in poor countries of their freedom and sovereignty. We can guess they will make those who fight for their own homeland look like cowards and criminals while the Seal Team members will look like heroic professionals fighting the "bad guys."
That brings me to the latest expose of propaganda, using children who are victims of the Syrian War to try and make Syrian President Bashar al-Assad and the Russians look bad. The latest effort was posted in RT, called "EXPLOITATION OF BANA AL-ABED: PARENTS USE CHILD TO WHITEWASH TERRORISTS IN ALEPPO," by Eva Bartlett.
According to the article:

"The exploitation of children in the propaganda war against has become routine. However, the exploitation by the parents themselves is a new low of depravity. Such is the case of child, Bana al-Abed, and the exploitation by her parents.
Until and even after the liberation of Aleppo in December 2016, one of the most popular Aleppo Twitter accounts, offering pleas for Western intervention in Syria, was that of then seven-year-old Bana al-Abed, living in eastern Aleppo’s al-Muasalat al-Qadima neighborhood of Jouret Awwad, Sha’ar.
As with the exploitation of Omran Daqneesh, the Bana narrative features an endearing child who causes otherwise rationally-thinking people to uncritically-accept transparent war propaganda rhetoric.
The Bana Twitter account began in late September 2016, with calls early on for action against the Syrian president, and , and with a glaring absence of information or mention of the terrorist factions occupying eastern areas of . In one notable early tweet, although only a cached version of the tweet exists, the Bana account tweeted:
“Dear world, it’s better to start 3rd world war instead of letting Russia & Assad commit #HolocaustAleppo”

The problem with this article is that few Americans will ever see it. Instead they will see the results of that propaganda and most will believe it without even thinking about it. The propaganda machine rolls on, while there is little to stop it. I keep posting articles like this where ever I can, hoping at least a few honest Americans will see it, read it and learn some actual truth. Continuing to fight this propaganda is a never ending challenge. But until I find a better way to counter the imperialist lies, all I can do is to keep on posting and exposing these lies. 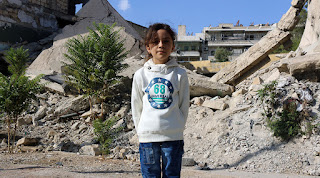