OPPOSE THE BAN IMPOSED BY JHARKHAND GOVERNMENT ON MAZDOOR SANGATHAN SAMITI AND CONDEMN THE CLOSING DOWN OF MSS OFFICE(S) !!
DEMAND FOR OPENING THE OFFICE(S)
REVOKE THE BAN ON MSS AND OTHER ORGANISTIONS IMMEDIATELY AND UNCONDITIONALLY!!!
STOP OPERATION GREENHUNT!! STOP REPRESSION ON PEOPLEʹS MOVEMENT UNDER THE NAME OF INTERNAL SECURITY!!
RISE AGAINST THE FASCIST DESIGNS OF CORPORATE LOOT OF THE NATURAL RESOUCRES OF JHARKHAND!!
The fascist Raghuwar Das government of Bhartiya Janta Party (BJP) has banned the MazdoorSangathan Samiti (MSS), by branding it as frontal organization of the Communist Party of India (Maoist) under colonial law, the Criminal Law Amendment Act, 1908. Not only this draconian move shall be fought against but also the real motive of the government behind this move shall be exposed.
MSS is a registered trade union with its offices in Raanchi, Dhanbad, Dalton Gunj and Girdi with open public and legal activities. MSS is also maintaining a hospital for the doli workers and other workers in Madhuban of Parsanath, a famous Jain pilgrimage,  of cost. MSS membership is in thousands in Madhuban itself it is 16,000. MSS work in Jharkahnd can be compared to that of Chattisgarh Mukthi Morcha (CMM) during Neyogiʹs time and also the maintence of Shaid Veer Narayan Singh Memorial hospital in Rajnad Gaon of erstwhile MP and present Chattisgarh. Closing such MSS issuing the notices, search of offices by the police and putting the notices in locks on the office doors is highly arbitrary and anti-labor, anti trade union act. I appealed to the people concerned with the working class, trade union and democratic rights to oppose this out rightly and demand for lifting the ban with united voice.
This banning of MSS is in the context of Mission-2017, an all out war on people. In the name of complete elimination of Maoists revolutionaries from Jharkhand, state is suppressing the struggling people who are fighting against anti people policies of government. In this plan the State forces have completely evacuated villages around Burha Pahar area in the name of cornering Maoist leader Arvindji whereas its real aim is to facilitate the construction of Kutku Dam. Against the construction of this dam, people are fighting for more than two decades. At the same time, the State has preparing for huge offensives in Saranda, Kolhaan and Porhahaat to facilitate mining giants in this area. The real aim of Mission-2017 is to facilitate the plunder of Jal, Jungle, Jameen and other naturalresources by imperialist and their agents.
As Mazdoor Sangathan Samiti, a registered trade Union,has raised its voice and fought ferociously against the suppression of peopleʹs movement many a time. So by banning MSS, Government desires to curb any voice that rose against its atrocious acts.
In the recent past, MSShas lead peopleʹs movement against the policies of the Indian state aimed to facilitate the corporate loot of the natural resources of Jharkhand. MSS have been at the forefront of the struggles against arbitrary step of the DVC against workers in Chandrapur and Bokaro thermals. They have fought against the proposed amendments to the Chota Nagpur Tenancy Act, (CNT 1908) and Santhal Pargana Tenancy Act, (SPTA 1949). MSS recently did mass gatherings against the fake encounter of the part-time  and tea staller Motilal Bhaske in Pirtand block, Girdih. These mass protests had put the government under many questions. MSS has also opposed the Parasnath Action Plan of the Jharkhand governmentwhich is designed to suppress people voices that are fighting for JAL-JANGAL-JAMIN in the name of developing tourist spot.MSS along with other organizations took initiative in commemorating the 50th anniversary of Great Naxalbari Uprising which is turning point in revolutionary history of India and 100th anniversary of Great October Revolution which is a turning point in world History and mobilized larger masses in it. An organization, which is not only opposing governmentʹs anti-people policy and atrocious act but also has an alternative vision of politics become eye sore for Government. Moreover, the continuous mobilization of masses in large numbers under the leadership of MSS has put the Jharkhand government on backfoot on many occasions.
As of now, the peopleʹs movement against anti people policy and fascistic suppression is growing and taking ground thwarting the corporate agenda and ensuring peopleʹs right on jal-jangal and jameen, this ban is simply another step to suppress any resistanceand is a calculated step to create an atmosphere that may enable them to crushpeopleʹs movements by attacking the organizations straight away and make them leaderless. In the name of maintaining Law and order & anti-Naxal drive, the Jharkhand government has banned 13 mass organizations so far.Instead of examining flaws in its policies and giving accountability, BJP government is sticking to Fascist moves of branding & banning.
RDF demands that ban on MSS and other organizations be immediately and unconditionally revoked and repeal all draconian laws such as Criminal Law Amendment act, Unlawful Activities Prevention Act etc.
RDF also demands all kind of military actions against the peopleʹs movement be halted immediately and Para-military forces and police be withdrawn with immediate effect.
RDF appeals to the  and Democratic sections to stand in support of MSS and fight the repressive State machinery and exploitative model which under the name of  serves the imperialists and its agents. 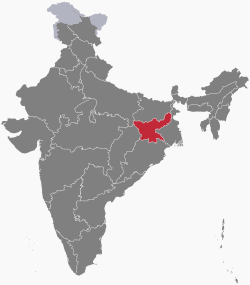