By សតិវ​អតុ
The Communist Party of Peru (PCP/Shining Path) have been accused of being the most violent and murderous Latin American guerrilla movement of the last century. If there is any truth to that, the Peruvian government is equally fascist and repressive. Against left opposition, such as the PCP guerrillas and their allies, the government is spiteful and hateful. They are one of the most reactionary governments of .
One example of their spite was the demolition of a mausoleum, holding the remains of  eight PCP guerrillas, that died in a prison massacres more than three decades ago. Their remains have been taken to a cemetery in a northern part of .
The mausoleum was built in 2016 by relatives of the dead rebels and was designed to hold up to 51 niches. According to AP News:

"The remains of the eight rebels were the first to be returned to their families. The other remains have not yet been returned.
The mausoleum was built in 2016 by relatives of the dead rebels and was designed to hold up to 51 niches. Conservative parties in and members of the military objected to it as an apology for terrorism and called for it to be taken down. Authorities say its construction was begun without the necessary permits.
A handful of relatives of the dead rebels protested at the cemetery’s gates but only managed to enter after the mausoleum had been torn down.
“I felt impotence, indignation and anger; the state doesn’t even let the dead rest in peace,” said Elviro Aponte, 80, father of one of the rebels.
Experts says there are some 6,462 clandestine cemeteries throughout , a legacy of the Andean nation’s brutal internal conflict. A truth commission found that between 1980 and 2000, fighting among rebel groups, the government and self-defense patrols left up to 70,000 dead."

The Peruvian government has gone out of its way to try and erase any kind of fair treatment to the surviving veterans of the PCP guerrilla army. There still are some active guerrilla units in , but they are not as active are large as they were before the capture of Chairman Gonzalo.[1] Besides the actual PCP guerrillas there are political parties that have tried to archive the PCP's history and they are trying to work out an end to the guerrilla war. To show any sympathy for that movement is always referred to as "apology for terrorism." That includes a political party called movadef.[2] They are a peaceful organization that the government refuses to recognize or legalize. Any monuments or symbols of the PCP are being destroyed by the government, which is trying hard to re-write history so that the PCP is always referred to as a terrorist group and described as a criminal organization devoid of any positive political positions.
movadef has advocated for a peace agreement between the rebels and the government. They also promote some of the politics that the PCP would have advocated had they been a legal organization.
The destruction of the mausoleum is pure spite. There is no legal or political reason for doing that. It is just a way of disrespecting those who died in their fight against the Peruvian government.
The government in is not very stable right now. President Martin Vizcarra is the present leader of . He has come to power after Pedro Pablo Kuczynski resigned, in disgrace and under pressure from an anti-corruption campaign. Vizcarra is leading the anti-corruption campaign and  is set to ask Congress to declare the public prosecutor’s office in a state of emergency after the agency’s top official removed two key investigators at the heart of a probe into a major graft scandal. The situation is similar to the anti-corruption campaign being used as a form of a coup, in Brazil last year. 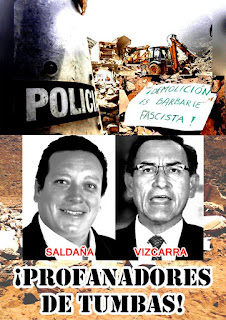