Condemn the social fascist left front of the Indian Government for violating all norms of democracy—assassinating Maoists!

By Harsh Thakor
CONDEMN WITH ALL OUR MIGHT THE SOCIAL FASCIST LEFT FRONT GOVT FOR VIOLATING ALL NORMS OF DEMOCRACY BY ASSASINATING MAOISTS—REPEAT OF EXPERIENCE IN TELENGANA AND ANDHRA PRADESH. PERFECT ILLUSTRATION OF WHY PEOPLE SHOULD NOT HARBOUR ILLUSIONS OF BOURGEOIS DEMOCRACY AND HOW REPRESSIVE EVEN THE CPM IS AS A PARTY. EVEN CPM CAN BE AS FASCIST AS ANY RULING CLASS PARTY AS SHOWN IN WEST BENGAL EARLIER SUCH STAGED ENCOUNTERS ARE PRACTICES OF A . IN ESSENCE THE RULING CPM IN KERALA IS AS FASCISTIC AS ANY RULING CLASS PARTY NEVERTHLESS SALUTE THE COMMUNIST PARTY OF FOR TAKING UP THE CUDGELS OF DEMOCRACY AND CONDEMNING THE STAGED ENCOUNTER.ATLEAST SOME VESTIGES OF DEMOCRACY LEFT!

On Monday on October 27th, the Kerala Police gunned down three Maoists near Agali in Kerala's Palakkad district. A day after three people suspected to be Maoists were killed by Thunderbolt, the anti-insurgency force of the Kerala police, and with reports suggesting that one more has been killed in the same operation, the Opposition has hit out against the state government by terming the operation as a fake encounter.

Three people — two males and one female, were killed on Monday morning during the search operations by Thunderbolt in the forest near Agaly in Palakkad. The identity of the victims has not been revealed by the police as the bodies have not been identified yet.

But reports suggest that the slain include Suresh, a native of Karnataka, and Rema and Karthi, who are natives of Tamil Nadu. Reports also suggest that one more person who was injured in Monday's shooting is also dead and he has been identified as Manivasakam.

All democrats have to tooth and nail condemn the fascist assault on 4 Maoists in a stage managed encounter. It is an illustration of the neo-fascist nature the state operates in eliminating democratic forces and continues the very path of such assassinations in Chattisgarh and Jharkhand and earlier Telenagana and Andhra Pradesh. A powerful civil liberties movement has to be resurrected. It proves that the ruling Communist Party of India (Marxist) in Kerala is as fascistic as any ruling class party, being different only in form, not in essence. Never forget the history of the assassinations by the  Communist Party of India (Maoist),(CPM)earlier in of Naxalite cadres. Revisionism toady is still a major obstacle in combating the growth of fascism.

A magisterial probe has to be demanded with the CPM ironically terming it as an action in defense against a Maoist attack. We must admire the guts or forthrightness of the Communist Party of India for demanding a magisterial probe and condemning the encounter. 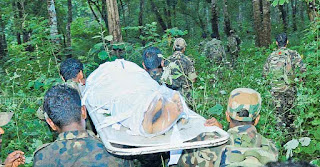 We must guard against a tendency of strong revisionist chauvinism and support the progressive trend defending the democratic nature of the Maoists.
Posted by SJ Otto at 9:02 PM