I have collected several articles on various rebellions in . There has been a lot of rebellious activities, some leaning right, other leaning left. We have had a vary restless year in . Here are a few celebrations of anti-imperialist rebellion:
-SJ Otto

Translated from Spanish to English from Google:

An army cash is beaten fists. It is the anger of a people who have lost their fear.
The popular revolt that began on October 18 has shocked society as a whole. The breadth of the movement, the immense participation of the masses, is unprecedented in our country, but it reflects the rise of the political and economic struggle that has been developing throughout . , , , , , , and very recently had already witnessed the rise of mass protest in recent years. And it also reflects a long tradition of struggle of our own people, which has reached a boom in the sustained rise of the popular struggle that we have been witnessing for at least two decades.
The town has recognized itself again as a town
Undoubtedly, what has been distinctive and highlights in this glorious revolt is the degree of unity that the people have achieved in the face of common problems. This has been expressed in many different ways in the streets of the most diverse neighborhoods, covering different class sectors and extending the protest to localities throughout , adding the demands of Chilean peasants for water and the support of the Mapuche struggle.
It has been clearly stated that there is a town composed of multiple classes and class sectors, which includes the working class, Chilean and Mapuche peasants, trade workers, offices, professional sectors, independent workers and even impoverished entrepreneurs who have desires and desires that are in open contradiction with the Chilean State and all its institutions. This people of Chile has been recognized as such and has faced the government, the Parliament with all the electoral parties that nest there and the Armed Forces and order that support this unfair system. This is one of the greatest lessons we must address.

For the rest click here. This will be in Spanish. 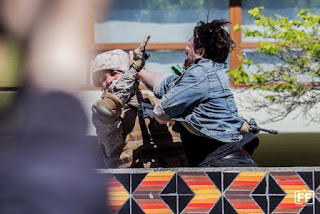 :
From the Communist Party of Ecuador - Red Sun

Translated from Spanish to English by Google:

On November 15, 1922 it was constituted in the baptism of blood and fire of the working class in .

Workers and workers of the electrical company, port, railway, carpenters, all, made a series of protests the first days of November 1922 until culminating in the great general strike of November 15 of the same year with claims such as payment of wages, reduction of the workday, high cost of living and others.

The response of the ruling classes (big bourgeois and big landowners) was violent, forceful, bloody. Hundreds of workers were massacred and their bodies thrown into the .
While it is true - by then - the peasant masses were already fused in the violent struggle, for the first time the workers (nascent class) put the use of revolutionary violence on the table of class struggle as a new way of confronting His executioners and oppressors.

If, on the one hand, the proletariat inaugurated a new way of fighting the enemy of the class and the people with revolutionary violence in the country, the enemy also did his own thing, he showed what he was willing to do to limit or neutralize the organization and struggle of Workers.

For the entire article click here. The original will be in Spanish. 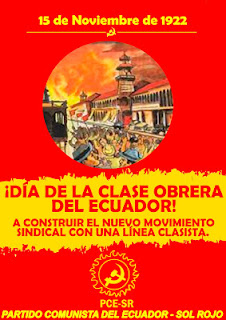 Translated from French to English by Google:

November 20, Day of the Resistance of the Black People in
By Serve in Imperialism and Resistance (Internationalism)

Text of the LCP ( Liga dos Camponeses Pobres , League of Peasants Poor, Maoist) for November 20, day of commemoration of the death of the leader "brown" Zumbi in 1695, and the struggles of black slaves in and their descendants in general:

VIVE ZUMBI DES PALMARES! LIVE THE DAY OF THE RESISTANCE OF THE BLACK PEOPLE!

The League of Poor Peasants salutes this day of November 20 by paying a vibrant tribute to the heroism of warlord Zumbi Palmares [ https://en.wikipedia.org/wiki/Palmares_(quilombo) ]; saluting thus the history of the resistance of the quilombos against slavery, for a free life without exploitation or oppression.
This is a day to reaffirm the example of struggle and resistance given by the Black People of Brazil, which is the very face of the working classes of our country and will one day obtain its particular liberation, as an ethnic group massacred by the capitalist system of exploitation, in the triumph of the revolution of all the oppressed popular masses of which it forms a part, and even represents the majority.
is the country that has the most "received" of African slaves. More than 6 million human beings have been abducted from their homelands on the African continent, and deported in conditions of indescribable cruelty by the colonizers, tortured daily and forced into forced labor. For more than 300 years, blacks have been enslaved in our country. Generations and still generations born slaves and sold like any commodity, entire families separated by force, degraded in their human condition, treated worse than animals.
Along with the original indigenous peoples, the blacks were the first workers of , the first oppressed and exploited social class that built with its own hands all the wealth of the colonial system, and whose exploitation allowed to develop and consolidate the system. capitalist and imperialist.
The Black People is the driving and main core of the forces of the coming Brazilian Revolution, as a majority of the working and peasant class. The whole history of his struggle for liberation, over the centuries, being only the prelude to the struggle that this gigantic and powerful black mass, which constitutes the heart of the working-peasant alliance, will now unleash to lead the New Democracy Revolution at its end. The Revolution is the only way to liberate all the popular classes and finally put an end to this division of humanity between the black people and all the oppressed peoples of our country and the whole world.
The fight for self-affirmation of the Black People and all its history and culture, to fight the genocide that strikes it in big cities as in the countryside, will soon raise as never before in our history, an organized revolutionary fury and invincible! The fury of centuries of resentment and dreams of revenge, crushed with fire and blood by the most brutal repression and also, often, diverted by the action of opportunism, the discourses of petit-bourgeois intellectuals divisive, corporatist and racist, related and complementary to the old bourgeois-latifundist state in the service of imperialism.

For the rest click here. This will be in French.
Posted by SJ Otto at 4:47 PM