Rally in defense of secularist left in India

By Harsh Thakor
SALUTE CITY OF MUMBAI FOR SHIMMERING THE SACRED TORCH OF SECULARISM AND SANCTITY OF COMMUNAL HARMONY BY BANGING EVERY NAIL IN THE COFFIN TO REVOKE THE NRC (National Register of Citizens) AND CAA (Citizenship ‘Amendment’ Act ‘CAA’, 2019). THE SCENE AT AUGUST KRANTI MAIDAN WAS REMINISCENT OF A HUGE ARMY MARCHING IN OR AN OCEAN CREATED TO EXTINGUISH THE FASCIST TYRANNY.THE SECULAR SPIRIT OF PAST TIMES WAS RESSURECTED AT ITS CRESCENDO LIKE A PHOENIX FROM THE ASHES TO SAVE ANY REMNANTS OF SECULARISM LEFT IN OUR SOCIAL ORDER.WITHOUT DOUBT ONE OF THE MOST MEMORABLE EVENTS IN HISTORY OF MUMBAI.HOWEVER THE SPARK SHOULD TURN INTO PRAIRIE FIRE BY ADOPTING THE CORRECT DIRECTION IN CHALLENGING HINDUTVA FASCSIM LIKE THAT OF BHAGAT SINGH AND NOT TREAD THE PATH OF LIBERALISM OR BECOME A MERE APPENDAGE OF BOURGEOIS POLITICS. 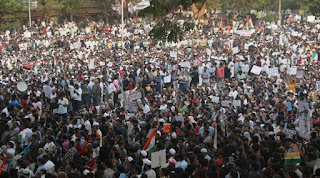 Thousands protest against Citizenship act at August Kranti Maidan, Mumbai.
On December 19th a red letter day was written in the history of at August Kranti Maidan in Mumbai protesting for the repeal of the NRC and CAA. Secularism has been buried in the grave by the Saffron rulers.25000 people marched creating the sensation of a tornado in resurrecting secular spirit and shimmering the spirit of resistance to eliminate fascism. It revived memories of how the Hindu and Muslim brethren fought together to prevent communal riots in the time of Babri Masjid demolition and Bomb blasts in 1993 with hundreds of instances of Hindus saving Muslim lives. Such a protest was a thorn in the flesh of the Rashtriya Swayamsevak Sangh (RSS) Hindu brigade hitting them at their strongest points. What was most encouraging was the overwhelming presence of student and youth Community who expressed wrath simmering like water at its boiling point. People participated from all walks of life be it doctors, lawyers, or businessman. Overall a most positive event for Communist revolutionary and democratic sections. One of the most defining moments in giving saffron fascism a jolt in its very backbone.
People participated from all rungs of life be it students unions, celebrities, politicians holding
Placards vociferously shouting slogans against the Narendra Modi Government. The behaviour of the police was most admirable not showing the slightest signs of anger or impatience.
Still as revolutionaries we must be wary of not falling victims to mere liberalism or ringing the bells of mere bourgeoisie reforms and not attack the fundamental autocratic or oppressive nature of the social system which nurtures communalism. Many liberals like Ramachandra Guha or Anand Patwardhan are critical of the Hindutva RSS forces but fail to understand how morally the Congress and other parties in essence are similar like Nehruvian 'secularism' which in essence pro-Hindu and anti-minority. Let us never forget the Congress patronage of riots in Bhiwandi in 1970 and 1984 or even Babri Masjid. Having mere faith in the constitution is not a solution as was not morally even secular from 1947 nor did the Constitution defend revolutionary democracy. Many of the speakers like Actor Swara Bhaskar upheld the so called 'secularism' of the Indian Constitution not throwing light on how the social system from 1947 itself patronised Communalism. Significant that veteran Gandhian G. G. Parikh referred to Gandhi pioneering the 'quit India' Movement on the same ground failing to point out how even Gandhian Congress played rule and divide politics to quell popular uprisings. He read out the preamble of the Constitution making the crowds break out in applause.
One of the boldest speeches were made by Indian Administrative Service (IAS) officer Kanan Gopinathan who quit services in because of denial of freedom. who explained that mere sloganeering would not solve the problem but understanding the strategy of Amit Shah in implementing the NRC.
Prakash Reddy of Communist Party of India (CPI) spoke with his characteristic flamboyance recounting the Mumbai of Sahir Ludhianvi or Aruna Asif.
Lara Jesani of PUCL demanded that the CAA and NRC be revoked like in Orissa,Kerala and .
Feroze Mithiborewala summed up how NRC caused great terror in and would be a gross attack on the economy and human life.
It was greatly admired even by ranks of Revolutionary forces .Prominent speakers were Feroze Mithiborewala, Teesta Setalwad, Mihir Desai, Actor Farhan Akhtar,, Anand Patwardhan, Javed Jaffrey, Dolly Thakore, Prakash Reddy of C.P.I.,Milind Deora and Eknath Gaikwad of Congress and leaders from NCP and Samajwad party, Lara Jesani of PUCL ETC. They vehemently expressed dissent over the CAA and the NRC connecting them to how fascism was simmering at its boiling point.
The protest revealed the great potential we have to create budding soldiers to defeat Fascsim but the cadres have to be given the correct direction .Placing mere faith in the Constitution will veer such unrest into mere reformism of the Gandhian, Ambedkarist or later Jayaprakash Narayan type. Fascism has to be fought on the basis of Marxist-Leninist political or class analysis and thus a distinct rupture has to be made from bourgeois democratic politics. A very concrete analysis has to be made on the nature of Indian Neo-fascsim .Cadres must be educated in the reactionary character of Gandhian liberalism and the constitutional system itself.
Posted by SJ Otto at 9:25 PM