By Harsh Thakor
A NEW CHAPTER WAS WRITTEN IN THE HISTORY OF REVOLUTIONARY STRUGGLE FOR SECULARISM AT GRAIN MARKET IN MALERKOTLA ON SUNDAY, 16TH OF FEBRUARY. TWELVE ORGANIZATIONS SHIMMERED THE SPARK OF ANTI-SAFFRON FASCSIM RESISTANCE AGAINST NCR, CAA AND NPR LAWS, TO TURN IT INTO A PRAIRIE FIRE. OVER A LAKH PARTICIPATED IN ONE OF THE MOST WELL ORGANIZED RALLIES CONFRONTING HINDUTVA FASCIST DICTATES IN THE HISTORY OF —REMINISCENT A OF A GREAT ARMY CONVERGING IN CREATING THE IMPACT OF THUNDER. AROUND 65,000 COMPRISED THE FARMERS WHICH WAS REMARKABLE. 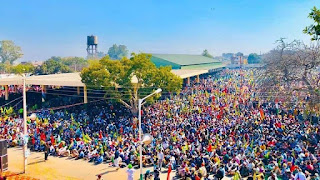 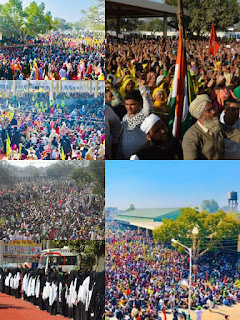 now as the regime goes about finishing the country’s minorities, beginning with the Muslims,” Sewewala said.

Professor Jagmohan Singh, the nephew of Bhagat Singh, said it was often seen that citizens have been punished for violating the law or denigrating the country’s constitution—
“But it is the reverse now with rulers like Amit Shah and Modi maligning our country’s constitution and people protesting on roads to save the constitution,” the professor said.
Punjab Lok Sabhyachark Manch president Amolak Singh echoed these sentiments. “The tirade of protests in will sustain for a very long period, to derail all the anti-people moves of the government, especially its communal agenda of targeting the Muslims. Harinder Bindu head of the Women's BKU wing made a touching speech on the aspect of oppression of women, particularly Muslims. It was touching seeing her solidarity with the Muslim women contingent at the conclusion. The youth were seen forming security rings around the stage, keeping a vigil all around to scuttle any incident which could escalate to violence. President of Indian Muslim League, Mahmud Ahmed Thindi felt that this rally was the most impactful against the NRC in a qualitative and qualitative sense, igniting the flame of resistance at a crescendo not reached anywhere else. He spoke volumes of the preparation marches of the groups; particularly the peasant groups and referred to how black laws destroyed the very sanctity of the constitution.