ON 10TH MARTYRDOM ANNIVERSARY TODAY LET RESSURECT THE SPIRIT OF COMRADE CHERUKURI RAJKUMAR OR AZAD WHICH IS EXTINGUISHING IN THE JUNGLES OF BASTAR. MAY MORE LOTUSES BLOOM LIKE AZAD TO LIBERATE FROM CLUTCHES OF PROTO-FASCISM.

By Harsh Thakor:
Today the Communist and revolutionary democratic world dips its blood in memory of Immortal Comrade Cherukuri Rajkumar known as ''Azad and n journalist Hemchandra Pandey on their 10th death anniversary. Their assassination defined a black chapter or new epoch in the history of the C.P.I.(Maoist) after its formation in 2004. In the hour of proto-fascism at its crescendo we must resurrect the spirit of Azad to enable new red roses to bloom like in the jungles of Dandakaranya today. Without doubt Azad's name will be permanently inscribed in red letters in the history of revolutionary struggle. Till his last breath he shimmered the spark of Liberation or ideology of Marxism-Leninism-Maoism. The day of his murder is marked as a landmark day by Maoist forces worldwide. He and journalist Hemchandra Pandey were not victims of an encounter with the paramilitary forces but assassinated in a stage managed murder, in . There could be no more perfect illustration of how the state camouflages its proto-fascist nature with an image of a neo-liberal democracy. After having agreed to enforce a series of negotiations or peace talks the rulers went back on their word and kidnapped Azad and his partner Hem Pandey, in . The administration lied by claiming that an encounter took place in Adilabad in Andhra Pradesh, cooking up a story. The report of civil liberties groups bear testimony that it was simply a cold blooded murder with no mutual tussle between the Police and the revolutionaries. History was repeated of the era of the C.P.I.(M.L.) when even central committee leaders were slain to death in cold blood. The murder and its circumstances educated broad sections of the country that such incidents were not just attacks on the C.P.I.(Maoist) but channels to destroy the base of all genuine democratic movement, through Operation Greenhunt. It illustrated the neo-fascist nature of globalisation and how the Corporate tyranny was breaking the backbone of all rights for Adivasis. It all the more asserted the need for tribals to arm themselves to defend their democratic rights. It also was ample proof of how globalization patronized all organized attacks on people's movements. What was most encouraging that a spark of protest erupted all over the nation by democratic forces that exposed the murder as part of the conspiracy of Operation Greenhunt on the whole on the people of . The most noteworthy protest took place in Moga in in 2010 by Democratic Front against Operation Greenhunt which in deep depth explained the nexus of the incident with the general repression on the toiling masses. The participation of intellectuals like Arundhati Roy, Gursharan Singh Ajmer Aulakh and Yashpal was very impactful. In capital of a big commemoration meeting was held at Gandhi hall at W.T.O presided by leaders of the Revolutionary Democratic Front and addressed by all sections of Communist revolutionaries. 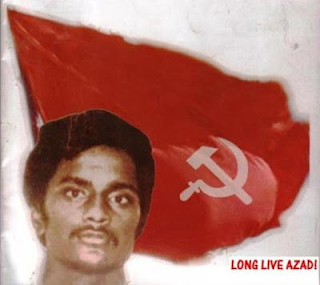 In Orissa in Malkangiri a 2000 strong armed rally was held in protest by Malakangiri Zilla Adivasi Sangh. In Mumbai there was a strong reaction from students of Tata Institute of Social Sciences. and Republican panther group. It managed to evoke the hearts of many liberals who were not Marxists and bring them within the democratic fold. Above all unlike Lalgarh later it never broke the morale of the C.P.I (Maoist) who pledged to avenge the murder and every year held a commemoration with great fervour. Inspite of being denied formal permission, the funeral of Azad was one of the most heart touching ever seen in revolutionary history with the eyes of the participants virtually narrating the story. A very impressive article was written by Saroj Giri in 2010 in Sanhati illustrating in accurate depth the stature and role of Azad and the fascist nature of his murder. It summarized simply how the Indian state was far from a genuine bourgeois democracy with Constitutional rights purely nominal. Another very factual and cogeal tribute was written by N.Venugopal in Monthly Review which covered the immmortal contribution of Azad as a revolutionary and touched on the conspirational nature of his murder. I recommend all democrats to read his writings where he reveals his great ideological mastery. His life merited a well researched biography which in deep depth summarized his penetration and contribution in revolutionary struggle. With dialectical mastery he overcame the hardest obstacles, traversing the most tortuous paths. He combined the methodology of an architect with the imagination of a scientist and determination of a soldier. Even afflicted by the biggest temptations he abided with the party discipline and rebuked all counter revolutionary trends or forces .It was fashion in circles to identify politics of groups like erstwhile Peoples War group as fostering anarchy or terrorism from the 1980's to the 90's .It was the practice of Comrades like Azad who made such intellectuals eat their words. They penetrated so deeply into the soul of the revolutionary masses that tremors were created in the ruling class camp. It is a most captivating study to examine what germinated the revolutionary career of Azad. What was remarkable was the manner he could resurrect himself or party forces from the depths of despair and his approach to tackling any loophole or crisis. With intense discipline he functioned within the party committees but also expressed his original views to give his work a creative tilt. In his student days itself he untapped his brilliance gaining distinction in all subjects in spite of having an problem of sight and studying by only listening. Azad was born into a middle class family in Karimnagar and from days of Srikaulam movement bells of revolution rang in his ears. He was a most meritorious student in Mechanical Engineering college in but sacrificed the lucration of a prosperous career. He gained his baptism into revolutionary politics at the juncture of the formation of the Andhra Pradesh Radical Students Union in 1974 and steered the organization to function underground in time of emergency. During the repression in the Girapally region he played a major role In the findings of the Tarkunde report and Bhargava Commission in exposing the staged police encounters. With most vigour he participated in the Go to villages campaigns after 1978 which integrated the student community with the peasantry. Azad was major contributor in the struggles of Vishakapatnam in the early 1980's on issue of bus fares and transport and was able to secure nationalization of transport. In 1981 he was instrumental in the success of the conventions on nationality movements of the country. In 1996 he galvanized large sections to participate and invented vast energy in the seminar on nationality movements in . In his last 25 years his journeys continuously encompassed Maharashtra,,Karnataka,Tamil Nadu and Andhra Pradesh With the diligence of a professor he conducted study classes for cadres , guided movements and formed party commitees..He dipped the pen in journals like 'Peoples March, 'Peoples Truth’, and 'Maoist Information Bulletin". His writing revealed great lucidity and incisive depth of grasp of revolutionary line. With great fortitude he defended Marxist ideology against the liberal overtones of K,Balagopal who opposed Marxism on humanitarian grounds. He published 2 major polemics in 1996 and 2001 refuting liberalism and defending Marxism against tirade of attacks. Azad played an exemplary part in the peace negotiations with the state in 2002 jointly with 'Janashakti' and in his last years. Few comrades exhausted so much energy in facilitating the success of the 2007 plenum and 2004 unity conference and at open level the Movement for Resistance in Mumbai in 2004.At the International level he was one of the major architects of the CCOMPOSA. which created a Coordination Committee for South Asian Maoist forces. The circumstances of the murder of Azad and Hem show the weakness of the subjective factor of the revolutionary Maoist forces and their naivety in trusting the ruling classes. Arguably the insulation of the party forces also was relatively weak, openly exposing its forces. Over exposure in social media through interviews enabled intelligence to penetrate the core of the Maoist movement .Significant that journal ‘Peoples March’ had still not revoked its ooficial ban during the killing. History repeated itself with the killing of Kishenji, in Lalgarh a year later. There were also hardly any protests against the murder involving the broad masses, although the Maoist party pledged to avenge the death . In later years instead of assassination of individuals a series of massacres were enforced in Chattisgarh and Malkangiri on border regions hitting the Maoists in their very ribcage. Progressively in states like Punjab particularly and cities like Kolkata and organized protests have been held in recent years against such staged murders, building up the general tempo against neo-fascism. Sadly still the mass media has been able to instill poison in the minds of the masses on the C.P.I.(Maoist) which progressive forces have not been able to extricate. Harsh Thakor- With inputs from work of K. Venugopal on biography of Azad.