Apparently high ranking officials in are complaining that human rights groups only complain when they kill people and supposedly these groups ignore violence by the leftist-guerrillas. This article, in the publication The Wire, proves otherwise. According to The Wire, two questions have been raised lately:

"There are two questions here. Are human rights activists and organisations really silent on the Sukma attack? And second, do they believe that human rights are only meant for a few people, especially those who, in the minister’s words, indulge in violence? The answer to both questions is no"

The same article starts off with:

"Every time there is an attack or killing by Maoists or a terror attack, a set of people otherwise contemptuous of human rights start asking questions like “Where are human rights wallahs? Why are they silent now?” Joining the bandwagon after the Sukma attack is Union minister M. Venkaiah Naidu, who recently issued an official statement titled ‘Why human rights activists silent on dastardly killing of CRPF Jawans in Sukma?’ "

I do like how this article uses the terms; " a set of people otherwise contemptuous of human rights." Because the government in has a horrible human rights record, and various human rights groups have called them out on it.

However a few points must be clarified. The article has the following paragraph:

"This isn’t a rhetorical (and ungrammatical) question raised in a press conference, but a formal statement released by his office, with the minister asking if human rights are meant only “for those who chose violence in furtherance of their outdated ideologies and not for security personnel and common people?”

Certainly the government of wants us to believe the Maoist guerrillas are fighting for "violence in furtherance of their outdated ideologies." But there are people all over the world that do not agree that their ideology is outdated. This blog is dedicated to the ideology that the Indian government wants us to believe is "outdated." We hope it is the future and we are certainly not alone. There are blogs like this all over the world and we all believe in Maoism.

A kicker above the mentioned article, "No, Mr Naidu, Human Rights Activists Are Not Actually Silent Over the Sukma Attack," says:

"Human rights activists have maintained that they are against all forms of violence, but continue to come under attack by the state."

And I suspect they are being honest when they say they oppose all forms of violence. Again we are not liberals. Leftist yes—liberals no. We support people's war. A lot of people, as myself, loath war. I don't like at all. But at times it is necessary. It doesn't take long to see that the guerrillas would be wiped off the map if they did not defend themselves. There would be no revolution without war. There are times when violence is necessary for our survival. The lost 55,000 US lives—the lives of some of our country's finest young people, in the push to bring and keep capitalism in . On the other side almost 2 million people were killed to try and force to be capitalists. The said it was stopping the spread of communism. But it was also the spread of style capitalism and it was done through violent war and colonialism.

In they have operation Green Hunt. The project attempts to irradicate the Maoist guerrillas. Capitalists are not docile people. The fight for what they want and they want to make LOTS and LOTS of money. Nothing is more important to these people than their money and their system that allows them to make it. They will do anything it takes to preserve their system.

We can notice that no attempt is being made to negotiate an end to the Indian war against the Maoists. They want only to win and nothing else. That leaves the Maoist only one alternative and that is to win themselves.

In today there is war because there is no alternative to war. It is kill or be killed. Human rights "liberals" can struggle against all violence. But for the real left, the Maoist left, that would be the same as suicide.

We are not suicidal, we must win! 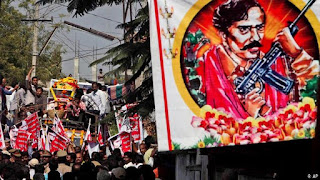 Pix by Indian Maoists release one Italian hostage | Asia| An in-depth look at news from across the continent | DW | 26.03.2012.