Today on April 9th we commemorate the 30th martyrdom anniversary of the 18 martyrs of Sewewala in Faridkot district in . They were all crusaders against the fascist Khalistani movement, striking every nail in the coffin to extinguish it. It also in no uncertain terms condemned the terrorism of the state. All the martyrs were part of the anti-repression and anti-communal front formed in September 1986. The major leaders were Megh Raj Baghtuana and Jagpal Singh, who were both members of the Centre of Communist Revolutionaries of India. The other martyrs were not members but supporters of the CCRI. At that time was ravaged or entrapped by the phenomena ofKhalistani terror and state terrorism, which encompassed every nook and corner of the state, reminiscent of a civil war. It is hard to do justice to the scale or intensity of the tyranny unleashed, giving vibrations of burning.

This front stitched the wounds by creating combat forces in regions where Khalistani forces had infiltrated most and waged mass revolutionary resistance. It nurtured or welded every democratic force into their struggles, be it the agricultural labourer, landed peasant, industrial workers, teachers shopkeeper or traders. Their practice was a perfect illustration of how to confront communal terror or fascism applying mass line. Its struggle sowed the base for the mass revolutionary secular struggles or organizations of the farmers and agricultural labourers today, particularly infusing secular spirit of Shaheed Bhagat Singh in the youth.

The Lok Morcha, had its genesis in the front, which was formed in March 1996,as a revolutionary political platform. The 12000 strong founding  Lok Morcha gathering in Selbrah voiced the very soul of the Sewewala martyrs, held in the very village of martyr Comrade Jagpal Singh.

The galvanisation of huge forces after the massacre to confront religious politics and crystallize mass movements has its roots in the anti-repression and anti-communal front formed in September 1986. .It was truly remarkable how it spread like a spark turning into a prairie fire. The martyrs wrote a new chapter in the annals of revolution in and struggle against religious fundamentalism. The event also deeply touched me and over the last two decades I penned many a line resurrecting their glory. The Sewewala martyrs or Front literally took revolutionary courage or spirit to proportions in regions of the sublime, continuing the great legacy of revolutionaries in , or .

The Front against repression and Communalism predominantly functioned in the Malwa

region comprising Faridkot, Bathinda ,Muktsar, etc. It hardly had any influence in the Northern regions like , Jalandhar, Gurdaspur etc, I recommend all democratic cadre to read about the struggles waged by the anti-repression and

Punjabi journals Surkh Rekha and Inquilabli Jantak Leeh. A most valuable source also is the All India report of the All India Federation of Organisations for Democratic Rights, published in 1987 on ‘The People Fight Back which most vividly covers the historical genesis or background. Even the commemoration conferences were most memorable gatherings crystallising or shimmering mass revolutionary secular flame at a crescendo and vivid illustration of massline practice. Particularly notable was the dalit polarisation in those homage conferences and the flux in relations with the Jat landed peasantry. Before the conferences a section of Jats conspired with the Khalistani forces. Sadly today still there is a powerful current soft-pedaling with the Khalistani movement indirectly or Sikh separatism in the name of Punjabi nationality They fail to perceive that even the Anandpur Sahip resolution presented sectarian or communal interests and today ally with sections like Shiromani Akali Dal. It was Sikh seperatist or Akali Dal politics that diverted the revolutionary secular movement of the Punjab Students Union from it's track in the early 1980's ,splintering the Communist revolutionary forces. In the Communist revolutionary camp in only two forces tooth and nail oppose Sikh separatist politics namely the Communist Party India (Marxist-Leninist) New Democracy and the Communist Party re-organisation Centre of India (Marxist-Leninist). Communist Party India (Maoist) sections in or even Liberation group support Sikh

trend. Today organisations like Lok Sangram Morcha which is  a constituent of the

Revolutionary Democratic Front align with Sikh separatist forces. This trend was even

reflected in the seminar held in in February 1996 by the All India Peoples Resistance Forum. Tooth and nail democrats must expose the fascist nature of Sikh separatism. I can never forget the intensity of the 1991 homage rally or the 1993 memorial conference where the effect of a tornado was created, with 10000 participants. I recommend someone translates the reports of Punjabi journals 'Inquilabi jantak leh" and 'Surkh Rekha' into Hindi and English. The method of struggle of the front is an illustration and a model for confronting the brand of Hindu saffron fascism which is entrapping the nation today like the tentacles of

which morally creates no dent in the divisive forces of the classes that patronise them. The Front combated trends that deployed armed retaliatory actions against the Khalistanis to

lives of the common people, in the mist of fascist tyranny. It inspired people to set up their own platforms, who did not join the front. I hardly have space here to narrate the countless

instances the Khalistani gangs were punished in people’s courts, literally being taken by the sword. Collective resistance was organised to the very core, enhancing people’s self defense. 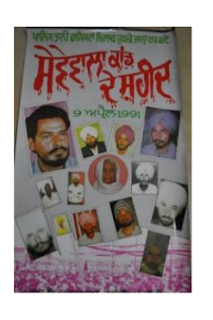