The Paris Commune was an important part of history and it needs to be celebrated for the significant achievement that it was!

By Steve Otto
As the article below says, the Paris Commune was a world event of major significance. If we randomly ask people in the US, or many other countries, when the first communist revolution took place, they will answer: “Russia.” Those of us who have studied Marxism understand that the first communist revolution was on March 18, 1871—the Paris Commune! That was in the century before the Russian Revolution of 1917.

As Marxists we understand the significance of the changes to the world, starting in 1871. As the document below states:

“Today, March 18, the international proletariat and the peoples of the world celebrate the 150th anniversary of the beginning of the heroic Paris Commune. It is the first attempt of the proletariat to storm the skies, it gave rise to the first workers' republic in history. Ten days after the popular uprising, the new revolutionary government declared the independence of the Commune from the old bourgeois power based in Versailles.”

And the line after that is especially important:

“It is the heroism of the commoners who, holding power in the hands of the proletarian masses for 71 days in Paris, made known to humanity a new form of State: the dictatorship of the proletariat.”

Regardless of the kind or type of Marxist, (even some democratic socialists or anarchists) nearly all of them honor the Paris Commune as a major event to be celebrated by all revolutionary proletariat supporters. Even though it only lasted 71 days, it was a major event and it showed many workers that a new kind of government was possible.

A Maoist friend of mine once told me there were there major revolutions he thought were important to the world, the Paris Commune, the Russian Revolution and the Cultural Revolution of China. I think that many other Maoist feel the same way. But I’m not sure that the world has not had other relevant revolutions. I would include the Cuban Revolution and the Sandinista Revolution of Nicaragua. Are they as important as the three I just mentioned? Probably not. But does it really matter? The world has had several serious revolutions. Some, as with the Paris Commune and the Russian Revolution are now over. They both lasted long enough to provide proletariat inspiration. But we don’t have them today. Others, as in Cuban and Nicaraguan, are not the same as they were when they began. That is especially true in Nicaragua. The governments in those countries today are quite different. A lot has changed in Nicaragua from what it was in 1979. As a friend of mine pointed out, there are revolutions and they don’t always last unchanged. Sometimes they are taken over by regressive leaders. They may hang on to some revolutionary ideals or they may hang on to nothing.

The Cultural Revolution was impossible after the death of Mao Zedong/ 毛泽东. Many people consider Nikita Khrushchev/ Никита Хрущёв to have brought the end of true socialism to Russia. Some believe he brought about Soviet revisionism.

We don’t want to forget that Chiang Ching/ 江青 created a government similar to the Paris Commune. In January 1967, it was called the Shanghai Revolution, or the Shanghai Commune. It was deliberately intended to resemble the Paris Commune. It took place about the beginning of the Cultural Revolution. It was originally shut down, because many Chinese leaders felt it was like allowing a separate country to exist within China.

The three main revolutions I mentioned, along with the systems in Cuba and Nicaragua, all have provided something we can learn from. If nothing else we learn from the past, both in mistakes and in revolutionary triumphs. That means we learned inspiration from the Paris Commune and many other revolutions since then.

So, let’s all solute the Paris Commune as an important lesson in the history of Marxism. 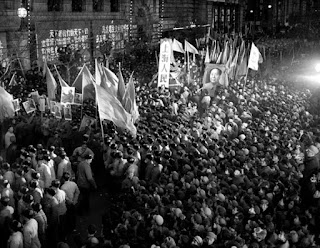 Pix from A celebration of the founding of the Shanghai People’s Commune in 1967.