Important quotes from Chapters of book

“Some of Marx’s views, based on faulty sources, such as the concept of an Asiatic mode of production based on supposedly stagnant village communities and a despotic state, have been abandoned by most Marxist historians. The fact that even the “hereditary divisions of labour” con-gealed in the caste order (correctly seen by Marx as a decisive impediment to progress) was itself never immobile, is now widely accepted. Similarly his characterisation of hand spinning and hand weaving as the pivots of village society, his view on the absence of private property in land, of the paralysis of productive forces for want of means of transport, of state functions as merely plunder and public works (irrigation) also stand corrected. Marx’s opinion that British colonialism effected the “greatest and... only social revolution...” in the sub-continent. To give it the halo of a “classic” view of our history would be making a laughingstock of Marxism and a departure from the creative advances made in applying it to the study of this sub-continent. D. D. Kosambi, a pioneer in this matter, observed, “The advance of agrarian village economy over tribal country is the first great social revolution in India: the change from an aggregate of gentes to a society.”

Materialist ethics he deals with how materialism rejects idealism. or their fundamental dichotomy. “Given that ethics belongs to the realm of consciousness, of thinking, can there be a materialist ethics? Most idealist schools of thought rule out the very idea. If at all, it is grudgingly admitted, all that is acceded to materialism is an imperfect concept of ethics. Consider the critique of materialist ethics given by Bal Gangadhar Tilak in his Gita Rahasya. It is rooted in his definition of materialism as a system of thought that accepts only that which can be sensed by human sensory organs. What is left out in this simplistic definition is materialism’s insistence on the objective existence of matter. Matter exists, regardless of our sensing it or not. This is the key difference it has with various shades of idealism. All of them ultimately deny the independent, objective existence of matter. Tilak’s main accusation is that materialism cannot comprehend the mind and all that comes in the mental realm. Relying on this assertion he goes on to claim that a materialist ethics, which tries to incorporate concern for mental satisfaction, must go against its own material premise. “

“Substantial advance was made in the erstwhile socialist countries in terms of generating a new consciousness of ethics guided by social concern. Both in community living and workplaces, there were numerous real-life instances where people created new social norms, breaking away from self-interest. Cynics dismiss this as fleeting moments. They assert that the human is selfish by nature and this can never be changed. The present stage at which the human race has arrived gives ample refutation of this assertion.”

“An element of idealism is indicated that did not accord with the basic ideological, theoretical vision guiding the Great proletarian Cultural Revolution. Nor did it correspond to the theoretical advances made during the CR in identifying the social, material, bases of reaction in a socialist society. These advances had given a new awareness. They taught that the emergence of capitalist-roaders and their efforts to reverse the advance of society was not simply a matter of the conspiracies of some “bad” people. In spite of the positive contribution of the “model operas” in overthrowing the old, their one-sided projection of the “perfect” departed from this new approach. Ultimately, it would give some negative results. “Fight selfishness, struggle against revisionism” was one of the key slogans of the CR. It captures its essence, indicating the target (revisionism) and aim (transforming one’s own consciousness). It has been claimed that Mao Zedong had, at one point, criticised the model opera repertoire of hampering a broad emergence of new forms and variety. That may be true. There is, however, no indication of his criticising the very approach, their very treatment of the themes. Another trend, contrary to the spirit of Cultural Revolution, was seen in the tendency to adulate the new heights of ideology. It was almost projected as some sort of a “magic wand,” something already containing answers to everything. A personality cult extolling the leadership reinforced this. It has been stated that these approaches had their roots in the views and practices of a section of the leadership that was actually trying to derail the CR. Corrections seen in the second phase of CR offer corroboration. The ups and downs of the Chinese people’s response and resistance to imperialism, giving due recognition to the objective output of feudal reforms too, was elaborated. Yet, all said, some elements of idealist, mechanical thinking do seem to be indicated at the leading levels of the CR itself.

‘Political ideology it has its origins in the crisis-ridden monopoly capitalism of imperialist countries. It is a form of bourgeois rule. The growth of neo-fascist political parties and the repeated electoral successes of Rightists in imperialist countries are directly related to the continuing economic slowdown experienced in those countries, triggered by the financial crisis of 2007-08. They are greatly aided by the resurgence of narrow nationalism, which portrays the “other” (mostly identified as immigrants) as the main cause for economic stress. ‘

“As a form of bourgeois rule, elements of the fascist ideology are quite often internalised by the modern ruling classes of the Third World, i.e. the oppressed countries, as well. It is blended with the autocratic, “rule by edict” system of rule commonly seen in the past under feudal regimes all over the world. In the imperialist countries also, fascism resurrected
aspects of the feudal polity, replacing bourgeois democracy’s “rule of law” and “formal equality.” But there is a difference in the oppressed nations stemming from persisting semi-feudal socio-economic and cultural relations. As a result, even when forms of bourgeois rule like the parliamentary system exist, they are inherently flawed. The blending is a permanent feature. The switch over from a formal parliamentary system with constitutionally assured rights to the blatant suppression of democratic rights, has an economic dimension even in an oppressed country. The difference lies in the near total permanence of economic distress. When it comes to the situation in India, the inherent flaw of the parliamentary system is often discounted or ignored by mainstream political analysts. They consider this country to be a mature democracy compared to other Third World countries. The decade’s long sustenance of the parliamentary system and separation of powers between the legislature, executive, and judiciary, are given as proof. Fascist rule, like the one seen during the Emergency imposed by Indira Gandhi, is taken to be an aberration. “

ON THE LAWS OF HISTORY

struggle can be brought out only when the communist party consciously tackles the contradictions underlying such specific issues in order to make them current issues of class struggle, thereby developing class consciousness and training its ranks. If this is not done, the call for class struggle will only be an excuse for the desire to coexist with various forms of oppression. Proletarian consciousness cannot cohabit with caste, gender, ethnic, religious or national consciousness. But this class consciousness does not emerge spontaneously from class existence.”

“Marx wrote about the dialectics of the relations of production and productive forces, of the base and superstructure. He gave an outline of how their correspondence turns into antagonism, leading to revolution and the birth of a new social system. Clearly, he was indicating universal laws of social dynamics and transformation. Admittedly that doesn’t settle the matter completely. Is Marxism correct in conceptualising such laws? Hasn’t it led to a linear view of historical development? The existence of that tendency and the harm it has caused is undeniable. Those afflicted by it tend to analyse concrete social formations by way of reference to a supposedly universal trajectory of historical trans-formation. Analysis is centred on determining whether the society being studied was a “form” of slavery or feudalism, etc. “

‘A communist party does not become a van-guard just by the act of its formation. There is a continuous process of its becoming one. Its vanguard role is something to be worked towards. It is a quality and acceptance it has to acquire and retain through its political leadership, theoretical work and radical practice. Furthermore, even when a communist party carries out its vanguard role successfully, that does not make it the sole or final arbiter of knowledge. Knowledge is being generated continuously, at diverse levels, all over the world. Therefore a communist party should be ever alert to the possibility that its understanding on some issue may be wrong or outdated. If that is not made a part of its awareness, an attitude of considering the party or leadership to be above errors will get entrenched. Conscious, critical grasp will be increasingly replaced by blind faith and the dogmatic assertion of “my party, right or wrong.”
. Basing themselves on the advances made through the Cultural Revolution, the communist parties must further develop structures and methods, allowing the supervision over the party by the masses. Their guidance must be the observation made by Mao Zedong that there is nothing wrong in the “masses teaching a lesson to the communist party.”

There is also the matter of an incomplete rupture from the Comintern approach. Among them, the cult built up around Mao deserves special attention. This business of personality cult was initiated by Stalin in total opposition to VI Lenin’s outlook. When the subsequent Soviet leader Nikita Khrushchev prepared ideological grounds for capitalist restoration by negating Joseph Stalin totally, under the guise of rejecting this cult, Mao took up the defense of Stalin. But this was done with Marxist criticism of Stalin’s errors, differentiating between what was to be adopted and what rejected. We need to think over whether this was complete. Personality cults can never be justified in Marxism. But instead of totally rejecting them, Mao limited himself to criticising their extreme manifestations. Though some seek to justify this by appealing to the complex situation of the class struggle in China, it is unacceptable in principle itself. The issue is not the extent of praise, or even whether somebody deserves to be praised. Such cults foster

a consciousness of infallibility of an individual, a leadership and indirectly of that party; something rejected by the Maoist party concept but seen in the Chinese party’s adjective, “always correct.” Contemporary examples of Maoist parties justifying their leadership cults by citing Mao, draw attention to the need to achieve clarity in this matter.” 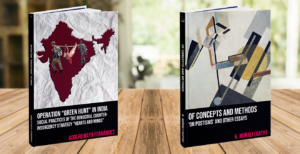