On 30th anniversary of fall of USSR let us remember that it was a Revisionist state that collapsed and not the Bolshevik party founded by Lenin. A new epoch was defined with the Socialist Revolution in USSR with path breaking achievements whose memories still shimmer in the hearts of the Russian people.

Last month we commemorated the 30th anniversary of the fall of the USSR. There is a virtual vendetta launched against Marxism by the Western media. In actual fact what collapsed 30 years ago was state capitalism or revisionism, not true Socialism. The path had already been paved by leaders like Nikita Khrushchev and Mikhail Gorbachev earlier who eradicated the roots of Marxist or Socialist principles at the very base. Such leaders dismantled the very base of Socialist Society, by introducing profit motive and private farming, promoting consumerism and introducing private ownership of party members within collective farms. What they brilliantly did was to disguise themselves as Marxists by giving USSR a socialist face. The collapse created a huge psychological dent in the minds of the world people on the progressiveness of Communism or Marxism and paved the path for the triumph of consumerism and market forces worldwide.

USSR from 1917-1956 could boast of achievements unprecedented in history and giving power to the working class as never before. The first genuine workers state was established, with workers owing the means of production. Unemployment was unheard of, literacy was given to all, health system surpassed that of any bourgeois democracy, production figures attained record heights. In no place in the world did workers receive as much facilities for leisure and holidays, better housing, or as adequate transport and electricity facilities. Through collectivization peasants could integrate to produce for the collective good and serve the industrial labour community. No party ever constituted such a strong fraction of members of worker or peasant origin. Russia industrialized at rate 4 times quicker than any Western power. I would like readers to refer to books written by E.H. Carr, Alan Taylor, Anne Loiuse Strong , George Bernard Shaw or Sydney Beatrice Webb, refuting the lies of the Imperialist media on the USSR and portraying the nation in the correct light. In more recent times it is worth referring to writers like Grover Furr, Raymond Lotta, Vijay Singh, Joma Sison, Joseph Ball, Gonzalo, or Bruce Franklin. These include non-Stalinists or liberals, who vividly recount how Soviet Union overcame the most hazardous obstacles, to take proletarian welfare to heights unscaled. Carr delves into the conspiracy of the colonial powers to topple USSR and how it was imperative for Lenin and Stalin to take certain steps. The methodology of the Soviet five year plans took production to regions untranscended. Carr is no Stalinist but morally summarises that USSR did exactly what it had to do in every step to confront being submerged or encircled by the colonial powers and Nazi Germany.

The planned economy of USSR was a model for the entire world. The important features from 1917 to ‘56 were the first establishment of the Soviets, as an instrument of working class power, Brest Litovsk treaty of 1918, Civil War of 1918-21 the New Economic policy of 1921 which introduced capitalism within a workers state, the collectivization of agriculture from 1928, the Great purges of 1933-38, War production from 1935 ,the introduction of the Constitution of 1935, re-constructing Socialism after 1945, and 1952 self criticism of the party. No doubt major errors or violations of Marxist practice occurred in Stalin era from the 1930's. Tremendous excesses occurred in the purges. Innocent party members perished in the purges with democratic centralism lacking. Revolutionary democracy was suppressed to an extent from below leading to bureaucratism. Agriculture was neglected to an extent with too much emphasis on industry. Attention was given single-handedly to the base, neglecting the superstructure. Instead of persuasion collectivization was undertaken by force. A strata of a privileged class of party members was created with wage differentials imposed and a class of technicians created. This did not reconcile with Marxism Leninism. The Soviets were not able to function democratically to the full, being completely subordinated to the Communist party. Harsh treatment was meted out to poets, artists and writers not conforming with the system, with dissent not given sufficient voice. Stalin also went overboard in dealing with Scientist Lysenko. Stalin also did not display dialectical method in re-building the party after 1945. Quoting Raymond Lotta “By 1934, Stalin and several others in leadership felt it was time to consolidate the political and social gains of the revolution. The new proletarian state was facing extreme and difficult objective conditions. War was looming. There was no prior historical experience for dealing with the magnitude of the situation. Adjustments were called for. But mistakes were made in how this dire necessity was dealt with. On the basis of the transformations in ownership that had gone on, there was a push for greater discipline and stepped-up production in the factories. 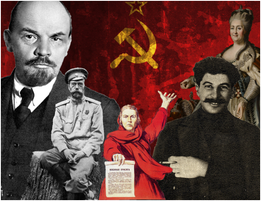