LONG LIVE THE 42nd ANNIVERSARY OF THE PEOPLE'S WAR!

From the blog of Communist Party of Ecuador, Red Sun / Partido Comunista del Ecuador - Sol Rojo:        To read this in Spanish  click here.

-Popular Movement , body created by the Party for work abroad-

Last year, on September 11, 2021, Chairman Gonzalo offered his life for the Party and the revolution in the highest combat trench of the people's war, his brave example demonstrates the mettle of a great communist leader, the greatest Marxist-Leninist-Maoist of the present time, teacher of communists, successor of Marx, Lenin and Chairman Mao Tsetung, center of unification of the Party and guarantee of victory that will lead us to communism. As he always taught to carry life at the tips of his fingers, Chairman Gonzalo, in more than 29 years of fierce combat in the most absolute isolation and under torture, until his last breath he faced his executioners with his fist raised defying death by unfading Marxism-Leninism. -Maoism, for the PCP and the BUP, for the people's war and the world proletarian revolution. With sure and iron faith in the cause of communism he gave his precious blood for what he believed. This is a great deed of the people's war. It shows that the people's war in , far from ending, rises up and calls us to once again inflame our entire geography.

With his heroic and defiant death, Chairman Gonzalo defeated the plans of imperialism, reaction and revisionism to deal him the final blow as part of the counterrevolutionary plan to annihilate the people's war and obtained a great political, military and moral victory for the party and the village. people's war, the international proletariat and the peoples of the world. They tried to present him as a capitulationist and revisionist, as a renegade head of the ROL rats, they tried to make him say that his almighty Gonzalo Thought was no longer valid, they tried to make him resign from the I Marxist Congress, Marxist-Leninist-Maoist, Gonzalo Thought of Maoism , the program and the BUP with its center the military line. But he remained firm and defiant and continued to fight hard and sacrificially for the Peruvian and world revolution until the end,  showing that the people's war in has not stopped for a single moment because the life of the Party never ceases. Demonstrating the invincibility of the people's war.

The Yankee imperialism headed by Biden, the Peruvian reaction headed by the president, the opportunist counterrevolutionary rondórondero Pedro Castillo Terrones and the revisionism headed by the rat “Miriam”, head of the opportunist, revisionist and right-wing capitalist line (LOD), have harvested a miserable defeat that plunges them into further crisis and decomposition. The old landed bureaucratic state at the service of imperialism, mainly Yankee imperialism, is going through the greatest crisis of its 200-year history, only to be swept away by the people's war.

The masses fight, denounce and reject the reactionary government headed by opportunism and supported by its blackest conspiracy against the people with all the other reactionary parties. This is what the analysts of the reaction have pointed out, saying that the Castillo government is the product of the social and political decomposition that surrounds the State itself and that it is maintained because nobody is interested in removing it, that is, there is greater collusion and struggle between the two reactionary fractions and their groups and the unwary that represent them, contrary to what the opportunists and revisionists say, there is a super coexistence in parliament between Fujimorism and anti-Fujimorism, which explains why Castillo remains in government and most scandalous laws that have been approved by common consent. That is the "popular" government that the ROL defends and its demand for a new constitution is that it serve to restructure the old state to reimpose bureaucratic capitalism and annihilate the people's war, the dreams of hyenas like their imperialist and reactionary masters. The masses need the people's war, it is the only way for their liberation from centuries of oppression and exploitation. The masses demand the leadership of the PCP.

On this occasion we reiterate our greetings and reaffirm our full and unconditional submission to our almighty ideology, Marxism-Leninism-Maoism, Gonzalo Thought, mainly to Gonzalo Thought, the solid foundation of its leadership, and to our heroic fighter, the Communist Party. from Peru, to its entire management system; to all the facts, documents and partisan agreements, to the First Congress, Marxist Congress, Marxist-Leninist-Maoist Congress, Gonzalo Thought, imperishable milestone of the victory achieved in the heat of the People's War, which laid the foundations of the Unity Party: Marxism- Leninism-Maoism, Gonzalo Thought, Program and General Political Line with its center the Military Line. Likewise, to the historic and transcendental Third Plenary Session and its masterful synthesis, the Speech of Our Headquarters,

Our commitment to give our lives to defend the direction of Chairman Gonzalo and his almighty Gonzalo Thought to serve the fulfillment of the task of the General Reorganization of the Party.

Express our greetings to the international proletariat and the peoples of the world. To the international communist movement and the Parties and Organizations that, embodying Maoism, struggle to make it the sole command and guide of the new great wave of the world proletarian revolution in the stage of its strategic offensive and sweep of imperialism and reaction from the face of the earth through people's war. When, as an expression of all of the above, more and more masses rise up everywhere and express great activity ready to rebel, it indicates that we are entering a new period of revolutions. The objective and subjective conditions for revolution have become much more favorable throughout the world. This determines the tasks and tactics of the communists in our country and in the world.

We salute the revolution as the main historical and political current in the world. To the next Unified Maoist International Conference to give birth to the New International Organization of the Proletariat as an important step in the reunification of the international communist movement in a new International product of the development of the people's war on the planet.

We salute the 50th anniversary of the founding of the TKP/ML, by its great leader Ibrahim Kaypakaya, and the people's war that he leads.

We express our deep class hatred against the new revisionism led by the damn rats of the ROL in the country as well as in the world, which serves the general counterrevolutionary offensive led by imperialism as the only hegemonic superpower, the main enemy of the peoples. of the world and the world counterrevolutionary gendarme in collusion and struggle with the atomic superpower and other imperialist powers.

Down with the war of aggression of Russian imperialism against ! Down with Yankee imperialism, the main enemy of the peoples of the world! People's War to Communism!

The heroic and victorious surrender of his own life by Chairman Gonzalo to impose Maoism as the sole command and guide of the world proletarian revolution, the Party, the people's war and the triumph of the democratic revolution in our country as part of and at the service of of the world proletarian revolution leads us to understand more deeply the need to serve to culminate the General Reorganization of the Party in and for the people's war, inseparably and irreconcilably fighting imperialism, reaction and revisionism, mainly the new revisionism led by the ROL.

It is up to us to cling firmly to the leadership of Chairman Gonzalo and his almighty Gonzalo Thought and implement the plans to complete the general reorganization of the Party. The history of the Party shows that when Marxism is abandoned due to the treacherous action of revisionism, what must be done to get out of the ups and downs is to firmly retake Marxism, today Marxism-Leninism-Maoism, Gonzalo Thought, and in this way we will necessarily overcome the bend and the inflection and the people's war will make the leap towards the conquest of power throughout the country.

LONG LIVE THE 42nd ANNIVERSARY OF THE PEOPLE'S WAR!

ETERNAL HONOR AND GLORY TO CHAIRMAN GONZALO AND HIS ALMIGHTY GONZALO THOUGHT!

LONG LIVE THE COMMUNIST PARTY OF !

HONOR AND GLORY TO THE PERUVIAN PROLETARIAT AND PEOPLE! 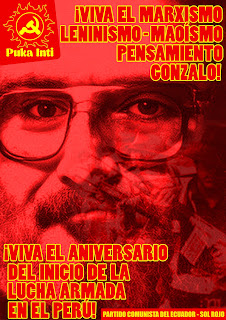