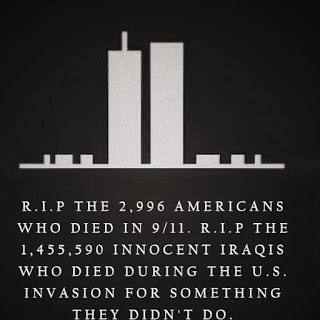 Once again it is 9/11 that horrible holiday that reminds us that we can die at anytime due to terrorist attacks. After 15 years we are not any safer than we were in 2001. We can pretend that all of the efforts our government takes to prevent such attacks are working. In reality those determined to find ways to attack us will at some time succeed.

This is an imperialist country that is heavily involved in shaping the lives and future of others. That task is impossible without someone getting upset and trying to kill us from time to time.

I remember the day the planes hit the twin towers in New York. I was just getting out of bed. I was not working that day. I turned on the TV as the events began to unfold. I was watching when the second tower got hit. Then they began to crumble and New York City looked like the aftermath of a volcano eruption.

As bad as it is to see almost 3,000 die in one disaster, what happened after that was just as bad. Every wing-nut in the country was out waving flags and promoting war with just about any country or group who ever had a tiff with the US. There were flags everywhere and on everything.

Today we have a few tributes on TV, a few flags raised and we're done with it for a year.

Since 9/11 we as a nation now occupy Iraq and Afghanistan. We aren't finished with these countries yet. With the use of drones we kill innocent people along with alleged terrorists who have never been on trial. This country can do a lot better than that.

One other interesting thing about 9/11 is it just happens to be the date of the military coup in Chile that brought about the end of Democracy, under the gleeful eye of our then President Richard M. Nixon. Salvador Allende, the elected president of Chile was overthrown by the military. General Augusto Pinochet took control of the country, set up military rule and banned all political parties.Democracy in Chile was illegal for the next 10 or more years. 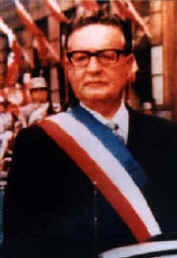 Santiago de Chile, 11 September 1973, 9:10 A.M.This will surely be my last opportunity to address you. The Air Force has bombed the antennas of Radio Magallanes. My words have neither bitterness nor deception. They should stand as a moral castigation of those who have been traitors to their oaths: Chilean soldiers, titular commanders-in-chief, Admiral Merino, who has designated himself commander of the Navy, even more señor , the cringing general who only yesterday manifested his fidelity and loyalty to the Government, and who also has named himself Director General of the Carabineros. In the face of these deeds it only falls to me to say to the workers: I shall not resign!Standing at a historic point, I will repay with my life the loyalty of the people. And I say to you that I am certain that the seed we have surrendered into the worthy conscience of thousands and thousands of Chileans, will not be able to be reaped at one stroke. They have the power, they can make us their vassals, but not stop the social processes, neither by crime nor by force. History is ours and is made by the people.Workers of my Nation: I want to thank you for the loyalty you have always had, the confidence you placed in a man who only was the interperter of great yearnings for justice, who pledged his word to respect the Constitution and the law, and who did so. In this final moment, the last in which I will be able to address myself to you, I want you to take advantage of the lesson: foreign capital, imperialism, united with reaction, created the climate for the Armed Forces to break their tradition, that which they were taught by general Schneider which was reaffirmed by commander Araya, victims of the same social sector that today will be be expecting with an alien hand to reconquer the power to continue defending their profits and their privileges.I address myself to you, above all to the modest woman of our land, to the campesina who believed in us, the mother who knew of our concern for the children. I address myself to the professionals of the Nation, to the patriotic professionals who continued working against the sedition overseen by their professional academies, classist academies that also defended the advantages of a capitalist society.I address myself to the youth, to those who sang and who brought their happiness and their spirit to the fight. I address myself to the man of Chile, to the worker, to the campesino, to the intellectual, to those who will be percecuted, because in our country fascism has now been present for several hours; in the terrorist assassinations, blowing up the bridges, cutting the railways, destroying the oil and gas pipelines, in the face of the silence of those who had the obligation to behave.They are in jeopardy. History will judge them.Radio Magallanes will surely be silenced and the tranquil metal of my voice will no longer reach you. It is not important. You will continue to hear it. I will always be together with you. At least my memory will be that of an upright man who was loyal to the Nation.The people ought to defend themselves, but not sacrifice themselves. The people ought not let themselves be subdued or persecuted, but neither should they humble themselves.Workers of my Nation, I have faith in  and its destiny. Other men will go beyond this gray and bitter moment when treason tries to impose itself upon us. Continue to know that, much sooner than later, we will reopen the great promenades down which free men pass, to construct a better society.Long live ! Long live the people! Long live the workers!These are my last words and I have certainty that my sacrifice will not be in vain, I have certainty that, at the least, I will be a moral lesson to castigate felony, cowardice, and treason.
Posted by SJ Otto at 8:49 AM