An analysis of the October Revolution- on the 100th anniversary

In the final analysis, the October Revolution was not only an insurrection but a revolutionary war that lasted for several years. Consequently, in the imperialist countries the revolution can only be conceived as a revolutionary war which today is simply people’s war - Chairman Gonzalo (AKA Abimael Guzmán)

This year many Marxist groups and news outlets are giving their opinions and analysis of the October Revolution, in the former . The following is an analysis put together from the web site Democracy and Class Struggle:


Was the Russian Revolution an Event or a Process?

In the video below of Aleksandr Buzgalin of Moscow State University we can see a revolutionary process unfolding from 1905 that takes and wide variety of forms making the Bolshevik Party the most versatile in the art of full spectrum resistance to the Russian State - in fact a People's War of a Protracted type.

The revolution is being built

According to common sense, the socialist revolution breaks out: it is therefore an event limited in time, an insurrection, a riot, a spontaneous popular uprising, as mentioned above. This conception has settled in the common sense because the revolutions up to a certain point in history, on the side of the popular masses, were always insurrections, spontaneous outbursts due upon the completion of the conditions that made it impossible the continuation of existing conditions.

In the common sense, anyway, next to the conception of the “revolution breaking out “the opposite conception of  “making the revolution” appears. In the first case, the masses rise up against a situation that has become intolerable. Their then is a passive movement: the popular masses are not moved by their internal transformation, but by external factors determined by the action of other classes, such as a body that moves driven by another. In the second case, the popular masses do (i.e., build) the revolution: their one is an active movement.

The activity requires consciousness: inventing, planning, examination in the course of work, stock, determination, in short, to take up our intellectual and moral faculties at the highest level, because revolution is to discover new things and invent, and because the enemy class uses any means, infamy and cruelty to maintain its power .

At this time the subject that leads the abolition of classes comes: it is the conscious and organized communist movement (with its political parties, trade unions and other mass organizations). The publication of the Manifesto of the Communist Party of Marx and Engels in 1848 was its “birth certificate“. The conscious and organized communist movement began to make the revolution, it only won when more or less consciously built the revolution, and when it did not do it, it learned the hard way that the revolution, then, was no longer something that breaks out.

It was a breakthrough of historic significance. For the first time in human history, social change was thought by the popular masses implementing it, and not determined by causes outside of them. Consciousness (reason and will) of human beings, their conception of the world, had taken on an unprecedented role. We can, and then we must realize the old dream of building a society and a civilization with rational method, and it is up to the working class to lead this process.(17)

This conception of the world has its foundations in the knowledge that revolution develops (it is done) as war develops (as war is promoted and conducted), and today the knowledge that it is a PRPW, experienced in the oppressed countries in a conscious way by the Chinese Communist Party.

Under the guidance of the experience of the socialist revolution in Europe in the early twentieth century, Gramsci explains that this strategy also applies to the imperialist countries, and also to .

The class struggle is a war

Gramsci describes the class struggle as a war. He says that the transition from war of maneuver (and from the frontal attack) to the war of position occurs also in the political field and criticizes Trotsky who, in one way or another, can be considered the political theorist of the frontal attack in a period in which it is only cause of defeat.(18)

With the war of maneuver or of movement Gramsci means the war of those who consider the attack as a quick and conclusive operation, as a people’s uprising in which the Communist Party took the lead. It’s a war doomed to failure in the face of an enemy which in turn carries out a planned war, with all the political and military means at its disposal in  large quantities. 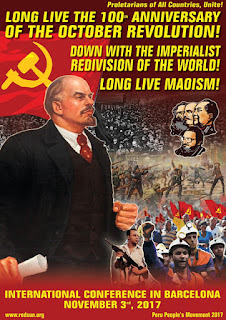