"American Atheists posted new billboards in and on Friday that read “Dear Christians, I share my toys. Why won’t you share the season? Happy Holidays for all!” The new message is in response to an anti-atheist billboard placed by a group of Christians on Thursday evening in that parodies the atheists’ first billboard that launched Monday and that accuses atheists of sacrilege and claims Christians are being bullied.
The Christian campaign’s spokesperson Marshall Hart also accused American Atheists of “using children” to spread its message, despite using the photo of a three-year-old girl on its own billboard.
“The hypocrisy is unbelievable,” said American Atheists President David Silverman. “Millions of American children are forced to go to church under the threat of being denied meals, losing household privileges, having their college tuition cut off, or being kicked out of their homes. Many atheist adults are forced to go to church under threat of divorce or lose custody of their children. We must ask the question, who are the real bullies? Those who are unafraid to stand up for our views on billboards, or those who destroy families from the inside out?”
I like celebrating the Winter Solstice and I get to do all the fun stuff, such as decorating a tree, putting lights on my house, toasting with wine, and giving a few gifts to close friends. My spirituality does not come from a god. It comes from within those who share my beliefs. That works for me and I plan to stick with that.

Have a Happy Winter Solstice! —Or whatever holiday you want to celebrate! 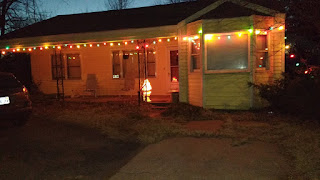 I love putting up Winter Solstice lights.
Posted by SJ Otto at 4:09 PM

You should leave Christman the fuck alone. You commies already have a holiday. It's called gay pride month.

By the way. Until your blog is MAJORITY wymyn, POC, Queer, Trans, indigenous voices, you need to STEP ASIDE and SHUT THE FUCK UP so the oppressed can have a voice. White male pieces of SHIT like you have had a voice for 1000+ years, now it's our turn. You got NO PLACE in this movement!

And just who are you?!

So we see the kink of ignorance and bigotry, in that first comment that I have written about. I’m gay because I’m not a Christian—what kind of nonsense is that? What does it hurt this nut-job that I celebrate a national holiday. I should “shut the fuck up?” I guess this guy thinks this is NOT a free country and he does NOT believe in freedom of speech.