By  សតិវ ​អតុ
Martin Luther King Jr. is one of those people who played an important role in history. He favored socialism but he was not a Marxist or a Maoist. He definitely contributed immensely to the end of segregation in . He was a religious person and he followed a strict policy of non-violence. He was influenced by Mahatma Gandhi. He was also a Christian and a Baptist.

As a Maoist I don’t always agree with following non-violence. There are times when we must fight back. I preferred the Black Panthers, who were influenced by Maoism, and their philosophy over MLK. But I have to admit that he accomplished a lot, with his non-violence. At times it was very effective.  MLK was very progressive. He opposed the Vietnam War. He took a left position on many issues.
In 1968, King and the Southern Christian Leadership Conference (SCLC) organized the "Poor People's Campaign." He did lean towards socialism. According to Institute for New Economic Thinking:

“Consider King’s words in a letter to Coretta Scott in 1952: “I am much more socialistic in my economic theory than capitalistic,” he wrote, adding that capitalism had “out-lived its usefulness” because it had “brought about a system that takes necessities from the masses to give luxuries to the classes.”

Before the collapse of the , that government published a book on MLK. They pointed to a lot of his accomplishments, yet left out everything about his religion. Whether a writer is religious or not, he/she should have pointed out that his religion was a major influence on him, throughout his life.
This last Monday there were two main events for MLK. The fist was a breakfast in the morning. The other started at noon and lasted until 3pm. That Martin Luther King, Jr Celebration was held at the WSU Hughes Metroplex.  It was hosted by The Greater Wichita Ministerial League . It was a religious oriented event that I did not attend. I have nothing against religious people. I don’t believe in discriminating against people who believe in religion. But I am not a believer. So I tend to avoid non-secular events. Various events are held across the nation, honoring MLK. There is nothing wrong with that—he was a great man and he did a lot to further civil rights. He deserves his holiday. 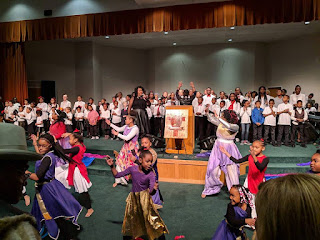 This picture from the Hughes Metroplex came from Lacey Cruse’s Facebook page.
Posted by SJ Otto at 3:33 PM