From The Idiot Factor:
All across the country, for a third year, women marched for their rights and to stand up to the Donald Trump Regime, this Saturday. The numbers were much lower, but part of that was the frigid cold in many of the northern cites, such as .
Here in Wichita women marched in temperatures around 26 degrees. Despite the cold a few hundred women marched from to the Wave, a few blocks away.
Manager at the Wave allowed the protesters to meet inside for a rally, with speakers.
Many of the speakers talked of economic issues, including Melissa Taylor. She talked about the importance of monetary worth of a woman. She said women need to stand up for themselves and demand equal pay. She pointed out that women earn less than men in such jobs as teaching. She said that on average the amount of money women lose to men, who make more, amount to them working for several days for free.
“That means you are working for 59 days out of 260 free,” she said.
Teresa Rupp, from Child Start, emphasized that child care is an economic issue for women.
Some people from managed to make it to other cities in the country.
For example Marsha Hesany, 61, wore pink cat-eared hats as she and a friend blew up balloons of Trump in diapers, in Washington, DC. She presently lives in , , but she has lived most of her life in . She also took part in the 2017 march.
Hesany is a lifelong marcher and recalled marching in support of the Equal Rights Amendment in 1982. “And it’s still not ratified!” she said. 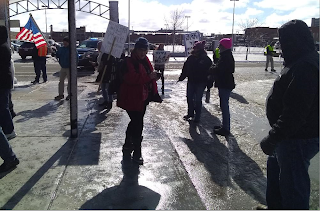 Women marched from Wichita City Hall to the Wave. 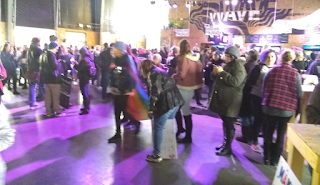 The Wave allowed marchers to come in from the cold for the rally.