By SJ Otto
One of my main interests of going to was to see the operations of an actual socialist country. There are the communist countries of , and .[1] They are run by communist parties. But they seem more interested in integrating their economies with the world capitalist economy.  Democratic People's Republic of (North) claims to be socialist, but has declared Karl Marx and V.I. Lenin obsolete. They have removed their statues of Marx and Lenin.
has remained a country that supports revolution and has not denounced socialism. The country openly endorses Marxist-Leninism as the country’s guiding philosophy. That is the main reason I wanted to go there.
From the left we have heard the arguments that and all of the pro-Soviet block nations were state capitalism. After seeing the real , I feel that label is ridiculous. The cultural differences between the and show clearly that is not capitalist. For example there is very little advertizing in . In the , it is in our faces and it is everywhere.
Another left argument is that is revisionist. That label came about as a way to distinguish Maoist or Asian versions of Marxist-Leninism from the pro-soviet block countries and movements. With the fall of the , this label seems useless. There is only one and almost no real Marxist-Leninist rivals—at least not countries. The label in many ways is obsolete.
From the right we get the argument that history shows us that socialism doesn’t work. My two weeks in convinced me that such a statement is blatantly false. Since 1959 socialism has worked in and I saw that first hand.
Another statement I’ve heard is that people who live under socialism are miserable. Again I had two weeks to test that theory out and I found it totally wrong. The people I saw and met did not seem to me to be miserable. I saw many people doing all the things I expect people to do in a country, they go to work in the morning, some sit outside their homes after work and I saw people enjoying themselves at their favorite bars in the evening.
I will have further discussions on the merits of socialism later in this piece.
I took notes from several of the meetings I went to. I also went out on my own to see what the people of were like. I did have some trouble not knowing Spanish very well. But I did the best I could. I will be writing on the experiences I had.
From the right, people will argue that I paid no attention to all the political prisoners in , or that I ignored people’s lack of human rights. Every Bourgeois journalist who has covered news on the island has focused, or even obsessed with such issues. There are plenty of articles on that issue and the same old “lack of political rights” that always come from a western journalist. I did not come here for those issues. I came here for my own agenda and not for the political purposes of defending Bourgeois ideology, culture and politics.
is a one party state. There are no opposition parties. There is only one major newspaper here. There are no opposition papers. Everyone here and in the knows this. There are other issues, such as the fact that poor Cubans can go to a doctor when they are sick and poor people in the usually can’t. Also, how many western journalists report on the political prisoners in or , when Trump has an official visit to those countries? So now that we have established these facts, I will focus on the structures of socialism, which is what I wanted to learn about in the first place.

Observations:
While in , in the capital (La Habana in their language) we stayed at the Martin Luther King Center. I took the time out to go to a park right in front of the center. The is in a common working class neighborhood. It is not in a tourist area. I was glad of that since I wanted to see what the common people live like. Here are some things I saw.
I saw a woman in the park with a cell phone. She had pink hair. It seems that people here have the same rights to different hair cuts and styles as we have here in the . That debunks another image I got from all the anti-communist propaganda= everyone is suppose to dress and look alike. I saw a few people with cell phones. At least some people own them. I had read were almost none of the people here had cell phones. I was also informed that there is an internet café where ANYONE can buy time on a computer and access the internet. There is also a Wi-Fi park where people can access the internet. A few people own their own computers. I was surprised that the government does not seem worried about its people accessing the internet and viewing foreign opinions.
The first night we were in town, I walked the streets and neighborhoods with some of my fellow caravanistas. We saw little stores and homes. Most of the people there live in small homes. They have electricity. They have appliances, such as refrigerators. Some folks have TVs. While we walked around and while we sat in the park, we saw no police. No one looked like they feared they were being spied on. There weren’t cops everywhere or soldiers. This looked nothing like the horror stories I have read about the people who live under communism. We walked past a house, were a young man had locked a fence to protect his 1950s style car. Those cars were everywhere. There were also some foreign made cars. I was told they were Russian. I’m not that knowledgeable about cars. So I had to take people’s word for what they were. 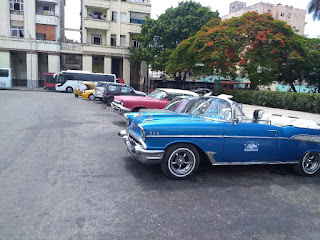 A lot of people sat outside their homes as we walked by. Others went to near by taverns.
On the last night I was there I ventured into a tavern just a few blocks away. It was a regular working class bar, with a few patrons hanging out. This place had no air-conditioning. I found a lot of businesses with air conditioning but this place did not.
While I was in the local tavern, I was able to talk just a little to some local people. I asked the waitress if she was a communist and she said no. The owner of the place spoke some English and he said “your government and mine don’t along.” I said yes, but I don’t represent my government and we seemed to get along just fine. All the people in that bar made fun of our President Donald Trump and they all complained about the blockade.
When the waitress told me she was not a communist, I figured I must be getting some honest opinions from these folks.
A little more than 10 years ago I visited and . Those countries were extremely poor. I had figured that might be like that. I was wrong. In and there was no air-conditioning after we left the air port. Most of the people there had no electricity. Bars had only rum and beer. Most stores had only two types of any product, be it camera film, soap or anything else.
In I did not find those kinds of conditions. There was electricity and air conditioning. There were bars with whisky and other types of liquor. I was told that people here in are poor. They have a hard time stretching their money for food. The blockade, which our group is trying to get rid of, causes a lot of hardship on the people. It causes a lack of medicines and other necessities of life. Ironically, the people hardest hit by the blockade are the common people.
The first place we went on our tour was some of the communities that were hit by a tornado back in January. Tornados are rare here so it was a difficult time for the people here and the damage was extensive. The government had restored the electricity in five days (compared with nearly one year in ). Within a few months the government had rebuild the homes and furnished the people of Villa de la Guanabaco with various appliances they needed. All of us caravanistas were surprised that these homes could be replaced so quickly. And in the the government would never replace people’s appliances like that.
One more observation was the advertising that I saw when I first came to the air port. There is very little advertising in . There were a few advertizing posters, but nothing like the where it is everywhere and inescapable. Buses had no ads on them. And there is NO ADVERTISING on TV. I studied marketing in while at , while getting my journalism degree. The whole idea is to convince people to want and buy things they really don’t need. It annoys the crap out of me and I find it one of the most repulsive things about capitalism. There were political posters and slogans on walls, but few ads.

Political messages like this were more common than ads.=> 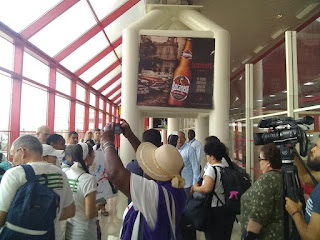 We saw this beer advertized everywhere. Ironically the beer was hard to find. Local people told me the tourist drink it all.
<=

The point of this part of my report is to establish that I found a kind of normality to life for the average person living in . It is a poor country, but not destitute. It is hurt by the economic blockade. We went to a lot of meetings where we met both officials of the government and leaders of non-government organizations. I have more to report on and that includes a look at the various methods of socialism here, government owned enterprises, coops and a few private businesses and farms.


[1] Communism refers to the final stage of Historical materialism, also known as the “materialist conception of history” according to Marx. Communist countries are supposedly practicing Marxist-Leninist socialism. Communism comes when the need for a government is gone and society evolves in which all peoples fulfill what ever their society needs.
Posted by SJ Otto at 9:10 AM