From The Idiot Factor:
Lately the  has been very supportive of people protesting their governments. After all protesters are fighting for democracy in such countries Hong Kong and . Our governing leaders have all given full support to these protesters. They have vilified the governments they are protesting.
US meddling have had the backing of millions of conservative people all across the . After weeks of hearing about theses protests from the media—it appears as if no one in the  would dare to oppose the protesters in these countries.
After almost a year of protests in , in which the  has backed an opposition protest leader Juan Guaidó as that country’s president, it would seem as if left-wing governments are the only place where such protests have taken place.
Now after all this time, it seems that right-wing government are now under attack by protesters. Currently in Chile, the government of billionaire Sebastian Piñera has deployed the army to crush nationwide demonstrations against inequality sparked by a subway fare hike.
In , indigenous peoples, workers and students recently brought the country to a standstill during 11 days of protests against the gutting of fuel subsidies by President Lenín Moreno as part of an IMF austerity package.
Venezuela’s Nicolás Maduro and the old-guard left around the world are celebrating ’s violent street protests as evidence of the alleged failure of free-market capitalism.
And is there any news coverage of  or ? So far I have heard nothing by the mainstream press. It is as if these protests never happened.
But there are some news outlets that have been paying attention to the way our mainstream press have treated those who protest right-wing governments. According to a news outlet called Fair:

Throughout Latin America and the , people are rising up against right-wing, US-backed governments and their neoliberal austerity policies.
Currently in , the government of billionaire Sebastian Piñera has deployed the army to crush nationwide demonstrations against inequality sparked by a subway fare hike.
In , indigenous peoples, workers and students recently brought the country to a standstill during 11 days of protests against the gutting of fuel subsidies by President Lenín Moreno as part of an IMF austerity package.
One might expect these popular rebellions to receive unreservedly sympathetic coverage from international media that claim to be on the side of democracy and the common people. On the contrary, corporate journalists frequently describe these uprisings as dangerous alterations of “law and order,” laden with “violence,” “chaos” and “unrest.”
This portrait contrasts remarkably with coverage of anti-government protests in , where generally the only violence highlighted is that allegedly perpetrated by the state. In the eyes of Western elite opinion, ’s middle-class opposition have long been leaders of a legitimate popular protest against an authoritarian, anti-American regime. Poor people rebelling against repressive  client states are considered an unacceptable deviation from this script.
‘Crackdown’ in
Corporate journalists have never been able to contain their enthusiasm for the right-wing Venezuelan opposition’s repeated coup attempts, which are regularly cast as a “pro-democracy” movement (FAIR.org, 5/10/19).
In 2017, ’s opposition led four months of violent, insurrectionary protests demanding early presidential elections, resulting in over 125 dead, including protesters, government supporters and bystanders. It was the opposition’s fifth major effort to oust the government by force since 2002.
For the rest of this article click here.

today is like a replay of the old Cold War. On the side of the left are , ,  and . Most of the other countries have had right wing government voted in over the last 10 years and they are all lackeys of the . The CIA and other American institution worked hard to get left-wing government voted out in such countries as . Changes in that country allowed the  to get Julian Assange turned over to them. That is because they got the people of that country to vote in Lenín Moreno, who replaced President Rafael Correa. Correa was not able to run having served two 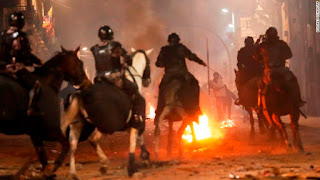 terms and that is all that government allowed him. Correa was a left leaning politician who refused to send Assange back the .  is the kind of leader the  wanted in . As with the governments in  and , they are the perfect puppets of the . They are obedient lackeys of  imperialism.

Already Bolivia’s President Evo Morales gave a press conference, recently, in which he warned that a right-wing coup attempt is being carried out so as to stop the full counting of votes, and annul the result of a recent presidential election, which gave Morales a first-round victory.
Considering the type of meddling the  has conducted in , it is not a stretch of the imagination to believe the  is trying to overthrow Morales’ government. He is following the same kind of socialist policies as Maduro. Unlike Maduro he is very popular and his economy has been very successful. Considering the kind of anti-socialist meddling we have see from President Donald trump, it is likely we will see the same kind of absurd accusation against Morales as we have seen in .
Trump and his ilk are working hard to eradicate socialism from . Trump has admitted that. It is unlikely to work in all of those countries. We have seen how ruthless and barbaric Trump is. He may have pulled US troops out of  to allow the Turkish government to destroy the PKK. Trump has admitted he thinks the PKK is worse than ISIS (the Islamic State).
So while much of the rest of the world has seen stodgy right-wing oriented governments pushing out any kind of left leaning governments, the left is still alive and well in . As leftist here in the  we need to keep supporting left leaning governments, such as , ,  and , as well as supporting anti-right-wing protesters in  and . Not all these governments are saints. The government of Daniel Ortega, in , may lack legitimacy. But we need to keep the  from interfering in that country. We need to support socialism and oppose  interference.