Self-Organization in the Chilean Revolt

We are seeing revolts all over the South American continent. The mainstream press may not be interested in covering these revolts, but here at Otto’s War Room we are interested. Finally the puppet regimes and their far right capitalist regimes are getting their just reward! –SJ Otto

By Galia Aguilera
In , the port city in the north of , workers and students have come together to form bodies of self-organization. These are known as Emergency and Protection Committees. We offer a detailed, first-hand account of how this committee works.
More than two weeks of mobilization by millions of people in have posed a serious challenge to Piñera and his government. The huge demonstrations across the country against the living conditions faced by working people all point to the same root cause: the repressive and neoliberal regime inherited from the Pinochet dictatorship (1973-1989). Government coalitions of the center-left and the Right have administered this regime in the interests of big business for the last 30 years. The chant “it is not 30 pesos, it is 30 years” graphically demonstrates how all of this is now being profoundly questioned.
Right now we are up against the attempt by the government, with the support of the center-left parties of the former Concertación coalition, to save itself—and the regime as a whole—through a policy of “social dialogue,” throwing a few crumbs to the population. But this has not managed to get the hundreds of thousands of protestors off the streets. Joining this attempt to derail the movement are the Frente Amplio (Broad Front) and the Communist Party. They are counting on Piñera’s claim that he “will not exclude anyone” from negotiations. In the case of the Frente Amplio, they have already sent off a letter requesting a meeting with the new Minister of the Interior, Gonzalo Blumel. In this way, they open the way for dialogue with a government that violates human rights and is responsible for murders, torture, rape, beatings, and other humiliations.
This situation poses the question: which road can we take in order to confront the traps of the government and win every one of our demands? In this respect, there are some examples of coordination among sectors of workers, young people, students, and professionals that deserve to be known and shared among the working class and the population as a whole.

In , the Comité de Emergencia y Resguardo (Emergency and Protection Committee) was formed on the initiative of the Teachers’ Association (CdP) and the Union of Teachers and Education Professionals (SIPPE). In the offices of the Teachers’ Association, teachers and education workers, health workers, industrial workers, students, artists, and professionals such as doctors, lawyers and psychologists all participate. They seek to make this space available to demonstrators who have been affected by the repression, and also for discussion, organization and coordination.
The Committee aims to be a place where different ideas for actions are discussed in assemblies in order to respond to the national emergency. One of the first points that members of this space agreed upon was to fight against the repression that the government has brought down on us, first with the state of emergency, and then with the curfew and the brutal deployment of the Carabineros [military police] and military against demonstrators.
For the rest click here. 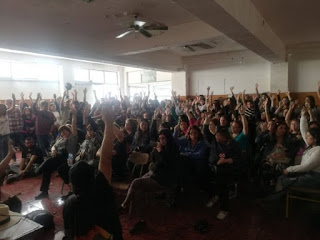 This space has also hosted assemblies of university and high school students, who have sought to organize themselves, especially since after several days of national mobilizations, their leaderships have not taken the lead in promoting the organization of students.
Posted by SJ Otto at 3:40 PM