By SJ Otto
There are times when I am totally dumbfounded by the stupidity of President Donald Trump. For years now, the has occupied . It has created a puppet government. There are still US troops all over that country and when the took on ISIS (Islamic State) they put Iraqi troops on the front lines so there would be few soldiers killed.
For many Iraqis this has been a major source of national humiliation. Now we see that humiliation reaching a boiling point, when protesters stormed the US Embassy. Iraqi troops didn’t try to stop them.
And what does the idiot Trump say about all of this. According to CNN:

" will be held fully responsible for lives lost, or damage incurred, at any of our facilities," Trump tweeted from . "They will pay a very BIG PRICE! This is not a Warning, it is a Threat."

He seriously tries to blame for the fact that his occupied people are rebelling!? This has got to be one of the most idiotic statements ever made by Trump and one of the most idiotic statements made from any president this country has ever had. Does he really believe he can stop the rage of the Iraqi people by threatening ?!
When he nixed the Iranian deal on nuclear weapons, he was not only stupid but arrogant. He not only sanctioned that country, but he threatened to sanction any country, including European countries, if they had any dealings with . As of now has no reason to cooperate with the and the people of that country are being punished for the actions of their government.
Trump and the recently bombed an area that was supposedly under the control of Hezbollah. Hezbollah is supposedly a terrorist organization, but, as with many such organizations, that designation is purely political and has nothing to do with that group actually using terrorism against the . Hezbollah is a religious paramilitary group that takes its inspiration from . Almost all the countries in the Middle East, including , have such proxy armies. There is no reason why can’t have such a group.
Trump acts the arrogant ass and he may commit this country to war on .
Peace loving people, in this country, really need to stand up to this arrogant ass Trump and let him and his henchmen, such as Secretary of State Mike Pompeo, know that they and their actions are unacceptable to the majority of the American people.
This people of this country should be out raged that this country is occupying foreign nations and they should have been out raged years ago. It is like the people of this country are either asleep or just plain insensitive. It is time for everyone to wake up and call out our stupid leader Trump for the arrogant ass that he is! 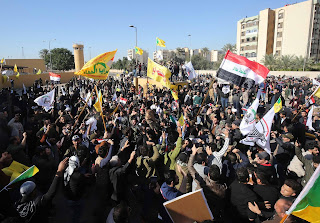 Pix by Iraq protesters attack US Embassy in Baghdad - CNN.
Posted by SJ Otto at 9:56 AM