SALUTE THE HEROIC ANTI-FASCIST RESISTANCE OF DEMOCRATIC FORCES IN INDIA 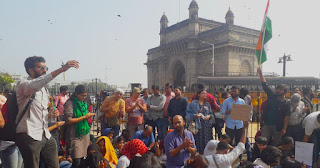 
In the last few days history has been created in the nation with the pot boiling at its crescendo against the wrath unleashed by the fascist Rashtriya Swayamsevak Sangh (RSS) goons on the democratic aspirations of the students of the Jawaharlal University which had the blessings or patronage of the ruling party, reminiscent of the storming of the Nazi paratroopers in the 1930's.India must be proud that in spite of the efforts of the Saffron BJP to poison every sphere of Society with Hindu fascist ideology the students have heroically protested against the iron feet of oppression. In the mist of the strongest police barricades they have stood up with the might of a tornado. The action of the ABVP was an attack by Hindutva fascist forces on secularism and democratic rights of the Indian people as a whole like a spark lit to turn into a prairie fire to engulf the Country with Saffron poison. Few incidents could better illustrate the Hindu Saffron essence of the social fabric today with the Police being totally passive and indirectly giving a passport for the ABVP masked goons to storm the University gates. Above all the ABVP blame the incident on the Maoists.
In Mumbai students assembled at the Gateway of India for the whole night vociferously shouting slogans against the divide and rule policies of the Hindu fascists. They fostered their brethren with spirit of Communal harmony and hatred towards anti-secular attacks. What is noteworthy that they were students with affiliations to no political party of the left or opposition just, free-thinking, secular students illuminating the flame of secularism. One virtually witnessed the resurrection of the traditional secular spirit in the Cosmopolitan city of in spite of being governed and dictated by so long by the saffron rulers.

In in several region students shimmered the spark of democracy .In reaction to the mob attack on students and teachers of the Jawaharlal Nehru University (JNU), a large number of protests were witnessed across the state.

The protests led by students, farmers, workers and civil society organizations condemned the RSS for allegedly destroying the country’s premier educational institution.
The Punjab Students Union organized protests in various towns, including , Ropar, Shaheed Bhagat Singh Nagar. Mangaljit Singh, state press secretary of the organization, alleged that the BJP-led government had failed to provide employment to people and economy was in a shambles and in such a scenario, it also wanted to crush each voice of dissent. 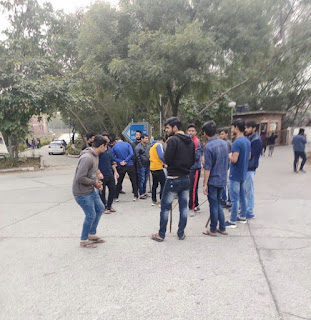 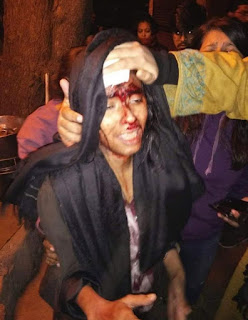 Residents of and trade unions, too, held a protest at the bus stand here today. Various speakers condemned the brutality on JNU students.

A massive protest took place at the Punjabi University of Patiala with various revolutionary sections like Students For Society (SFS), Pandit Ravishankar Shukla University (PRSU), Pandit Ravishankar Shukla University (PRSU), All India Democratic Students' Organization (DSO), PSU etc, in addition to progressive intellectuals of the University. The protest was held January 6, with several speakers from various forces summarizing the nature of the fascist attacks on JNU resolving to hit it at its strongest point. The condition of dalits and Muslim minorities was touched explaining the connection between their economic plight and the fascistic government policies. They all had great conviction that was turning into a Hindu terrorist state stripping all its secular remnants. All speakers called upon the unity of all secular forces.
During a protest at , , Surjeet Singh, head, Punjabi Department, alleged the attack was motivated and carried out by members of the ABVP. “These attacks are attempts to gag the voice of people.”

The Punjabi University Teachers’ Association also condemned the attack on students. Teachers of government schools wore black ribbons as a mark of protest against the incidents of violence against students and teachers of the JNU on Sunday night.
Besides, farmer organizations, including BKU Dakonda and Krantikari Kisan Union, organized protests at , Sangrur and other towns of the state.
In an impactful protest was stage by a joint front of Disha, All India Students Association, Bhagat Singh Chatra Morcha of about 100 students. In the Disha group organized a qualitative protest.

In Kolkata students surged at the College square storming in like the tidal wave in an Ocean. Significant participation by Communist revolutionary forces like Communist Party India(Marxist Leninist) ,PCC, PRC, Red Star, New Democracy etc. campus was literally illuminated with an anti-fascist spark. Students have been undertaking preparations for the All- India bandh on January 8th, supporting the call of leftist forces. On 7th January a significant protests was launched at Jadavpur University by forces like the All India Democratic Students Organization, the Revolutionary Students front and the Students Federation of India. In a mass protest on people indoors were so enthroned with the spirit of the protests that they flashed their mobile lights looking like light shimmering on the rally.

Some days ago in a rally was launched with intensity of fury against Saffron fascism at its crescendo. Over 20000 people participated with the police making every effort to sabotage the protest.
What is also heartening that several members of the reactionary Bollywood industry openly condemned the communal attack with no reservations .Without doubt it was one of the boldest gestures ever by the Film industry in raising their powerful voices in the mist of Communal fascism. Most heart touching statements by stars like Shabana Azmi, Diya Mirza and Twinkle Khanna. Sadly the majority of the film stars backed out.

The challenge of the hour is to appropriately build the united front against fascism be it with Ambedkarites ,Lohaites, Gandhians ,revisionist left parties or liberals. We must be oblivious of the intentions of other ruling class opposition parties be it the Congress or the Aam Admi party who even if having secular pretensions in essence are still reactionary. Nevertheless we may be forced to have tactical alliances with liberal forces, but with correct approach. It is also of great relevance to highlight the connection between the anti-capitalist or pro-working class economic struggles and the movements confronting the fascist laws like NRC or CAA isolating the minorities. This is of all the more importance with the taking place of the All India strike on January 8th against the government policies. The unity of the working class movements against the government policies with the protests against NRC and CAM or other anti-communal protests will be a major thorn ion the flesh for the ruling Narendra Modi government.

The ruling class media is banging every nail in the wall to distort or bend the facts by projecting it as a clash and not a fascist attack. It has placed equal blame on the left democratic forces in JNU.I recommend everyone to read articles by Peoples Review which are most analytical and insightful on this issue. All democrats must remember that the Saffron fascists will sharpen their tentacles to its optimum point and never under estimate them even if they have been embarrassed. After all they have the blessings of the corporates and big capitalists, ‘A one-sided attack.’

Below is a report from the Scroll on the protests of students in Mumbai
At the #Occupy Gateway protest in Mumbai, many students refused to speak to media and said that they were observing a “silent protest” in solidarity with the students of JNU. At around 12.30 pm on Monday, they sat listening attentively to N Sai Balaji, a research scholar at JNU and a former president of the JNU Students Union.

Balaji placed the blame for the violence squarely on ABVP. “Some media channels have described last night’s violence as a clash between the left and the right, but it was nothing but a one-sided attack,” he said. “We will not give legitimacy to any media that does not acknowledge this.” Balaji also listed names of several individual members of the ABVP who had allegedly been identified for perpetrating the attack. Protesters yelled “Shame!” in response to each name he called out.
While Sunday’s JNU attack took place in the context of several months of agitation against the fee hike at the university, protesters in Mumbai claimed it could not be seen in isolation from the ongoing nation-wide protests against the new Citizenship Amendment Act and the BJP government’s plans to implement the National Register of Citizens. Last month, students of Aligarh Muslim University and Delhi’s Jamia Milia Islamia were brutally assaulted by police forces cracking down on anti-CAA protests.
“This is how a tyrant state reacts when there is a student uprising,” said Saxena.
Said Dan Matthew, a sports management graduate from Kerala who has been studying in Mumbai for the past four years: “When a government starts targeting students it shows that they are scared.” Matthew had not been able to attend any of the protests against the Citizenship Act in Mumbai so far, because he is recovering from a spinal surgery. But on Monday morning, he said he could not help showing up for the #OccupyGateway protest.

“This government is discriminatory and is taking us back to the 1940s of Hitler. If we don’t protest now, then when?” he asked.
A pre-poll tactic?

Several protesters also pointed out that the attack on JNU students had come barely a month before the Assembly election in , scheduled on February 8. This, they said, was proof that the BJP government at the Centre had a hand in the JNU attack.
“What happened in JNU is a smokescreen for the February election,” said Pooja Sinha Roy, a cultural guide working for a tourism agency, who had been protesting at Gateway since 4 am. “It is obvious that the Aam Aadmi Party is likely to win the election, so by doing all this, the BJP government is trying to create conditions for President’s rule before the election.”
Nivedita Rao, a professor at Mumbai’s KC College and a former JNU student, also linked Sunday’s violence to the Delhi Assembly election. “The government is desperate, they have lost the narrative,” said Rao. “This kind of violence has never happened in the history of JNU.
Posted by SJ Otto at 9:44 AM

I also have interest in that. This is exactly what we have been searching for! I think there is much more to this, though.