Marx was inspired by great men of past years, decades, centuries

By SJ Otto
They say that important people often stand on the shoulders of other important people. New ideas rarely come in a vacuumed. They come under the influence of others. So when we look at the web sites and blogs, that  Karl Marxist, Marxist-Leninist (Vladimir Ilyich Lenin), Leon Trotskyist, Joseph Stalin, Maoist (Mao Zedong), etc. One person on my Facebook page said she noticed a lack of articles on straight out Marxism. She asked why we don’t write as much on him as those other theoreticians.
But Marx is a basic requirement for understanding any Marxist, whether Lenin or Mao. Mao may be the next, highest stage of Marxism, but a basic understanding of Marxism is required reading and understanding to get to that higher stage.
What a lot of Marxists don’t think about are the influences of other philosophers and political thinkers on Marx himself. Marx did not just suddenly write the Communist Manifesto and then suddenly Marxism and communism exist.
There were other socialists and other Communist like thinkers over the last 2,000 years. Some Trostkyist groups have made use of the name Spartacus. That is because many Marxist believe Spartacus was one of the first and most successful of the slavery revolts. These groups and individuals recognize that Spartacus was a revolutionary—Certainly not in the modern convention, but he did lead a revolution. He did rebel. And rebellion has always been an important part of Marxism.
About the first real writings of Karl Marx is a dissertation called “The Difference Between the Democritean and Epicurean Philosophy of Nature.” He sided with Democritus as being way more scientific than Epicurus. This is not only one of first writings of Marx, it shows that he understood the need to reflect on past philosophers. Democritus lived in ancient . He understood the materialistic view of life. While Marx defended Democritus over Epicurus, there is plenty of evidence that he admired Epicurus and a later proponent of him, Roman poet Titus Lucretius Carus. 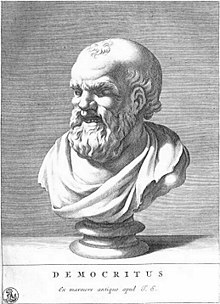 According to MR online:

On Marx and Epicurus

Posted Jun 25, 2018 by Eds.
Marxism , Philosophy Global Newswire
Originally published: International Communist Current by ICConline (February 17, 2018)
Under the heading ‘Readers’ Contributions’ we aim to encourage our readers and sympathisers to write texts and articles which can go into greater depth than is possible in our discussion forum, and so stimulate a longer term reflection. These articles, while being broadly based on proletarian politics, need not fully represent the positions of the ICC, or may deal with issues on which the ICC does not have a collective view.

Given the fragments, literally, of the works of Epicurus available to Marx at the time, the materialist analysis that he manages to develop from them is pretty amazing. After Marx’s demise much more evidence of Epicurus’ philosophy has been found: on charcoal remains of papyri in Philodemus’ library in Herculeum, on the wall of Diogenes of Oenoanda and writings kept in the for whom Epicurus was strictly taboo. The mere mention of Epicurus (or Lucretius) led to torture or imprisonment by the Inquisition in and all of their followers were consigned to the of Hell. Marx was also assisted in this work on Epicurus by the poem On the Nature of Things and works of the aforementioned Roman poet Lucretius.
Titus Lucretius Carus was a great influence on the Enlightenment Italian materialist Giambattista Vico, and an even bigger influence on the workers’ movement. He developed the idea of descent with modification, and understood that energy could neither be created nor destroyed. His poem was the basis for Lewis Henry Morgan’s great work, Ancient Society… and thus Engel’s work The Origin of the Family Private Property and the State.  He laid out the tenets and philosophy of Epicurus in his poem. The renowned Epicurean scholar, Cyril Bailey who translated his work into English, said in 1928: “Looking back on his (Marx’s) work now it is almost astonishing to see how far he got considering the materials then available and he was probably the first person to see the true distinction between the Democritean and Epicurean systems“. And to a large part he did this by focusing on the meaning of the Epicurean swerve.
Epicurus’ study of the atom allowed him to delve into “the nature of human sensation and existence”. Benjamin Farrington, noted scholar of Greek philosophy, wrote: “Oddly enough it was Karl Marx in his doctoral thesis… who first took the measure of the problem and provided the solution… making Epicurus the deeper of the two (in comparison to Democritus) inasmuch as he laboured to find room in his system both for animate and inanimate being, both for nature and society, both for the phenomena of the external world and the demands of moral consciousness” (From Marx’s Ecology, materialism and nature by John Bellamy Foster). 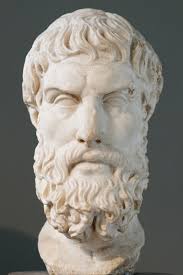 So we see his reflections on ancient Greek philosophy. According to his dissertation he had designated a difference between Epicurean philosophy and those that are considered to be the foundations of modern capitalist philosophy: the Stoics:

Epicureans, Stoics and Sceptics are regarded as an almost improper addition bearing no relation to its powerful premises. Epicurean philosophy is taken as a syncretic combination of Democritean physics and Cyrenaic morality; Stoicism as a compound of Heraclitean speculation on nature and the Cynical-ethical view of the world, together with some Aristotelean logic; and finally Scepticism as the necessary evil confronting these dogmatisms. These philosophies are thus unconsciously linked to the Alexandrian philosophy by being made into a one-sided and tendentious eclecticism. The Alexandrian philosophy is finally regarded entirely as exaltation and derangement-a confusion in which at most the universality of the intention can be recognised.

The next important philosophy that Marx took interest in was Georg Wilhelm Friedrich Hegel. According to Wikipedia:

By the time of his death, Hegel was the most prominent philosopher in . His views were widely taught and his students were highly regarded. His followers soon divided into right-wing and left-wing Hegelians. Theologically and politically, the right-wing Hegelians offered a conservative interpretation of his work. They emphasized the compatibility between Hegel's philosophy and Christianity., they were orthodox. The left-wing Hegelians eventually moved to an atheistic position. In politics, many of them became revolutionaries. This historically important left-wing group included Ludwig Feuerbach, Bruno Bauer, Friedrich Engels and Marx himself.[2] They were often referred to as the Young Hegelians.
Marx's view of history, which came to be called historical materialism, is certainly influenced by Hegel's claim that reality and history should be viewed dialectically. Hegel believed that the direction of human history is characterized in the movement from the fragmentary toward the complete and the real (which was also a movement towards greater and greater rationality). Sometimes, Hegel explained that this progressive unfolding of the Absolute involves gradual, evolutionary accretion, but at other times requires discontinuous, revolutionary leaps—episodal upheavals against the existing status quo. For example, Hegel strongly opposed slavery in the United States during his lifetime and envisioned a time when Christian nations would radically eliminate it from their civilization.
While Marx accepted this broad conception of history, Hegel was an idealist and Marx sought to rewrite dialectics in materialist terms. He summarized the materialistic aspect of his theory of history in the 1859 preface to A Contribution to the Critique of Political Economy:
***
While Hegel was not a Marxist or even a leftist, he lived (1770–1831). So we see how a person from a century (circa) before Marx influenced his beliefs. And that is the point of this article. No one could be a Marxist in 1770. But they could have been influenced by either Hegel or by some of the earlier philosophers, such as Epicurus or such rebels as Spartacus.
This is not much different than asking “what did a Christian do for religion if they lived 1,000 years before the birth of the man Jesus Christ. But the difference here is that Epicureans did not rely on anyone for the afterlife. Marxism was an idea that simply had not developed yet. Christianity was a religion that lacked a beginning other than Judaism. And prior to Judaism there where any number of religions that people had—totally unrelated to the belief that Jesus could provide us with eternal life. Marxism never offered that, so it was just an idea that had not been perfected yet.
When we get to Friedrich Engels we also see inspiration from past philosophers/ rebels. In his book, The Peasant War in , he is inspired by a rebellion leader named Thomas Müntzer. Müntzer lived (c. 1489 –1525). So he was from the 16th century. Once again we see a person who lived way before the publishing of the Communist Manifesto and he has influenced one of Marxism most important philosophers. Engels co-wrote the Manifesto with Marx. His writings are almost he same as Marx’s. He is just as important as Marx. And like Marx, he was influenced by past writers.
As time went on, various important adherents, such as Lenin, added to Marxism. Later we had Stalin, Mao and later such followers as Joma Sison and Chairman Gonzalo. Gonzalo was inspired by Marxist José Carlos Mariátegui (1894,  1930). While there are a lot of steep differences between all of these people, the one thing they all have in common is that they follow a tradition, developed by Marx. As a commenter said not long ago, why don’t you discuss Karl Marx? We may not discuss him, but all the beliefs we hold start with Marx. Marx developed his ideas from the sources listed here. All Marxists are influenced by the past, be it ancient philosophers as Epicurus or slave rebels such as Spartacus. In the Western hemisphere we see such rebels as Túpac Amaru (1545 –1572) the last monarch (Sapa Inca) of the Neo-Inca State, the remnants of the Inca Empire in Vilcabamba, Peru. His name has been used by several revolutionary movements and some revolutionaries themselves. Marxist today built their ideas on those of people in the past. It has been said that great people stand on the backs of earlier great people and in Marxism, as in many other ideas (religion, philosophy, etc.), that is the reality. We have many people to thank for our modern ideas.
Posted by SJ Otto at 11:07 AM