US- Latest spike in coronavirus brings out the worst in humanity—The scum de la scum!

From The Idiot Factor:
There are times when politics in this country goes from conservative to grotesque. Some people are so cold hearted and self centered that they don’t care who dies from the coronavirus. Our President Donald Trump certainly does not care who he hurts or who gets hurt. Unfortunately there are many others in this country who are right behind him.
Just recently Trump asked The US Supreme Court to strike down the Affordable Care Act (Obamacare). We are in the middle of a pandemic and he wants to wipe out health coverage for as many as 23 million Americans. It seems unthinkable and incredibly cruel. And yet our leader has plunged ahead on a path that will destroy people’s lives and possibly cost people their lives. And it seems as if he just doesn’t care. He has his far-right agenda and nothing is more important than that agenda. 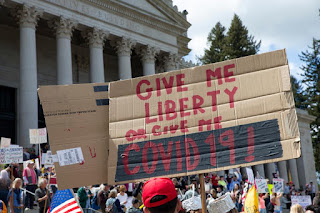 Unfortunately he has many followers and whether they follow him directly or they just happen to be as heartless as him, they all contribute to an attitude that other people’s lives are less important that someone’s personal individual freedom.
According to Forbes:

“There are now over a dozens states who have experienced repeated anti stay-at-home” protests. Some of these protests, while purported to be spontaneous, it turns out are often less an example of grassroots organising and more an example of what is referred to as “astroturf” organising, or well-funded groups that organise supporters to make it look like a grassroots movement.”

As this article points out, this is way more than just some people who are spontaneously rebelling against stay-at-home rules and measures. Much of it is organized by far right organizations:

“In , protests organised by the Michigan Conservative Coalition and the Michigan Freedom Fund - whose chairman manages a large amount of the financial investments of Education Secretary, Betsy DeVos - blocked ambulances from delivering patients to hospitals. Participants in the protest chanted, “Open up !” At one point, some protesters were heard chanting, “lock her up” in reference to Michigan Governor, Gretchen Whitmer, who responded, “The cars were blocking one of our hospitals, so an ambulance literally wasn’t able to get into the bay for ten minutes,” continuing “This is the kind of behaviour that extends the needs for stay-at-home orders.” 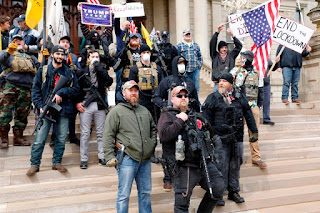 So not only are these brutish protesters selfish because they won’t wear masks or stay at home, there are political groups trying to gain from the pandemic. All this is taking place as the nation tried to open up the economy and businesses such as bars and restaurants and the results is a spike in our nation’s sick and dying from the coronavirus. According to The Washington Post:

“Seven states are reporting new highs for current coronavirus hospitalizations, according to data tracked by The Washington Post — , , , , ,  and  — as the number of infections continues to climb across the South and West. More than 800 covid-19 deaths were reported in the  on Tuesday, the first time fatalities have increased since June 7.”

It is hard to understand what a conservative leader, as Trump, or those various organizations that are fighting against the stay-at-home orders, get out of such actions. Do they save tax payers money by denying people government aided health care? What ever they are getting, they are getting it at the expense of people’s lives. We are seeing the dregs of humanity, the bottom of the barrel, and the slimiest of the slime balls. We are seeing humanity at its worst. Polls are showing that Joe Biden is way ahead of Trump and if the election were held tomorrow, Trump would be tossed out on his ass. That is what he deserves. Unfortunately many of us don’t expect the kind of change this country really needs. It will be a slight improvement, but not much of an improvement at that. As I watch the right-wing jerks, yelling at people and showing disrespect mainly at people who have the nerve to want to live, at the expense of some jerks idea of freedom, I am sickened—pure and simple.
These are difficult times and the scum who are causing them seem to have no plans to change their ways anytime soon.
Posted by SJ Otto at 11:53 PM