We continue on with a third look at National Geographic article called "The Most INFLUENTIAL FIGURES of Ancient History." Today I look at the leaders who ran the . They include Julius Caesar,[1] who reigned before the fist century AD, who I looked at quite a bit in the first installment of this series. Then there is Augustus Caesar,[2] 31BC to 14AD. To understand the emperors of , we have to realize that these people were different from the kings, queens and feudals who would replace them all. While these emperors where not elected, they did not come to power automatically because of "royal blood." was a combination of democracy and oligarchy. While it wasn't really democracy, it was a more secular society, more or less, and less rigid than the governments of the middle ages.

They were, at times progressive, as when Julius expanded the elections of legislators. According to Wikipedia: 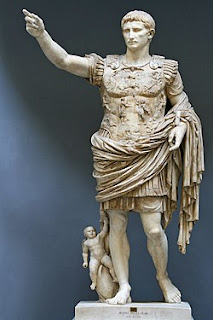 "After assuming control of government, Caesar began a program of social and governmental reforms, including the creation of the Julian calendar. He gave citizenship to many residents of far regions of the . He initiated land reform and support for veterans."

So he was a reformer. However some of 's most brutal wars took place under his control, such as the Gallic Wars. Also:

"He centralized the bureaucracy of the Republic and was eventually proclaimed "dictator for life" (Latin: dictator perpetuo). His populist and authoritarian reforms angered the elites, who began to conspire against him." 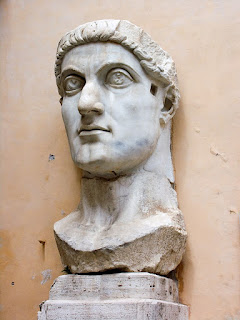 Another important emperor that National Geographic cheers on is Constantine,[3] who reigned in the third century AD. He is, of course a favorite of Western historian because he brought Christianity to the .

According to the biographer Eusebius, he and his forces saw a cross of light in the sky along with the Greek words for "in this sign conquer.” That night also had a dream where Christ reinforced the message. He and his soldiers put the symbol on their shields and when they triumphed at the Milvian Bridge Constantine attributed the victory to the god of the Christians. Modern historians still debate whether was sincere or if this was a political maneuver. In 313 AD, met with Licinius the Eastern Emperor and together they issued the Edict of Milan.

They granted to the Christians full authority to observe their religion. For a long time after that, both the old religion and Christianity were tolerated. Not until later did the Roman emperors declare the Edict of  Thessalonica That made Christianity the official state religion. After that all other religions were outlawed.

Jesus Christ[4] is also mentioned in the National Geographic issued. He preached a message of forgiveness, love, and renewal. And that message is in stark contrast to the war and violence used to get and keep his empire. That is where the message of Christianity is completely lost on a system that relied heavily on violence and conquest.

That issue of  National Geographic does mention Pericles[5], (Περικλῆς) from 461 to 429BC, who promoted democracy in . This is in stark contrast to the emperors and tyrants that ruled over the . He was known for giving speeches in favor of democracy. He was one of the few supporters of democracy that Western historians ever give any praise to. The one theorist they left out was   Cleisthenes, (Κλεισθένης). Cleisthenes was an architect for Athenian Democracy. Western Historians love the Stoic philosophers who have been a big influence on Western civilization. But Most of the Stoics were not all that found of democracy. Plato[6] preferred a system of “philosopher kings.” Over time the world has produced such people. But he was not able to find such leaders in his time. 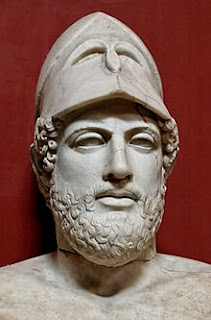 So of all of National Geographic’s influential people, the only one I admire all that much is Pericles.

[2] Augustus Caesar, "The Most Influential Figures of Ancient History," p. 100.

[4] Christianity, "The Most Influential Figures of Ancient History," p. 110.

[5] Pericles, "The Most Influential Figures of Ancient History," p. 78.