Homelessness in Wichita, Kansas USA—as long as they don’t see it, They’re OK with it!

I consider homelessness to be a major biproduct of our capitalist system. If there are two things that condemn this system it is the miserable health care, where many people are denied life needing care and homelessness, which rose to a new high here in Kansas due to the “war on welfare” that conservatives have fought for the last 30 years. The homeless populations is evidence that they have succeeded in their goals of destroying any kinds of aid to poor people in this state or country.

At one time both poor men and women could on get welfare. I was on the system myself, back in my 20s in the 1970s. Today, in Kansas, only women with children can get cash aid and the rules are so cumbersome that very few poor women can qualify for such aid.

With these constant attacks on public assistance more and more people end up living in the streets. And the problem just gets worse, year after year. The funny thing is that this is the results of what a lot of people want. From KSN News:

“The after-shock of the COVID-19 pandemic has some in Wichita preparing for an increase in homelessness.

Humankind Ministries said this year the number of people staying at their shelters is lower than expected. They believe this is because apartments are not allowed to evict people who aren’t paying their rent, but come May, they said that will change.

“I do believe we haven’t felt the full effect of the pandemic and the impact it will have for those in poverty,” said Christen Sampamurtgy, the director of program and compliance with Humankind Ministries.

The trickle down of the COVID-19 Pandemic has many community organizations concerned.”

But in reality they are not that concerned and they never were. The housing owners get everything they want in Kansas and that leaves a lot of people out who simply can’t pay the absorbent prices for homes or apartments. The prices go up and up, but not the minimum wage. That has been frozen for the last 10 years. This year congress buckled under to corporate concerns and no one gets a raise. But a lot of poor people get the boot and join the homeless. The last time this country raised the minimum wage:

It would seem that the hardest part of all of this is that people who have fallen through the cracks, who have worked but haven’t earned enough to be able to afford a place to live—NO! The problem is that people have to see the losers in our society and they have to put up with all the fall out that comes with people who try to live and sleep on the streets. According to CBS:

“Hundreds and hundreds of people are living homeless and out on the streets in Wichita.

Camping out and blocking public sidewalks is simply not allowed.

City workers have painted white lines in front of the Open Door shelter on Topeka Street earlier this week. Wichita's police say it's in an effort to clean up homeless camps that have been causing problems.

There are problems with the homeless, but the attitude seems to be “what we need is out of site out of mind.” There are problems with garbage, people pissing in the street. But the problem of people without homes is not really looked at that closely. Yes those at such outfits as Wichita PD's Homeless Outreach Team mostly seem to focus on keeping the homeless legal and mostly out of site. Few really want to focus on this country's disposing of people who have missed the US gravy train. We really don’t care about those who the system has failed and failed miserably. There is almost a “blame the victim mentality” against homeless people. They did something wrong and they don’t have homes….or…they chose to be homeless.

Even a lot of the liberals or progressives in our political system are at fault for just brushing homeless people under the rug. They are not important. They may not vote. No one cares about them and here in Wichita, the majority don’t want to hear about them or see them.

I am disgusted to live in such a town, state, country. Some of our leaders may pretend they are progressive, but if they persist in covering up this huge disgrace, they are not. 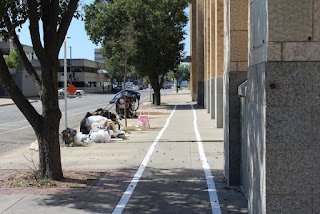 Today is the day for AQK – the man who has secured the existence of the Islamic State of Pakistan.Jinnah created Pakistan – but AQK has secured it,forever,and he is the man,whose genius,will execute the telling blow, of the Ghazwa E Hind !

His name will ring like a sonic boom,when the Pakistani Nukes,do the “rainfall saturation” on the Indians !

It was the Indians who pilloried and vilified AQK,and tried to have him assassinated – and failed on every attempt.Even the CIA tried to kill AQK and failed !

Can a man work in NASA,and then go to a LDC,and replicate a Moon Mission ?

Can a man work in CERN,and replicate it in a LDC ?

People will say NO CHANCE – but I say MAYBE !

Can a man work in e Dutch Nuke lab and replicate the entire nuclear supply and value chain (mining,fuel rods,enrichment,warhead design,warhead fabrication,convert the enriched uranium into metallic form,make tritium…), logistics of imports,movement of funds, recruit and train N Scientists …. AND DO ALL THIS,UNDER THE NOSE OF MOSSAD,CIA,IAEA AND RAW – and then,SUCCESSFULLY DETONATE A DEVICE (with only prior simulated trials) ?

People say “IMPOSSIBLE” ! And I say – That is GENIUS ! dindooohindoo

Even from the time of Noah to date – no human has ever,replicated such a feat.The Giza is a marvel of human ingenuity,precision, magic and perfection – BUT NOT ABSOLUTE AND DIVINE GENIUS !

SUCH GENIUS COMES ONLY TO THE BLESSED – AS WITHOUT ALLAH’s BLESSINGS – AQK WOULD HAVE FAILED.People forget that AQK started the centrifuge design with Maraging steel,in the 1st instance.

The Quran was REVEALED to the Prophet,VIA AN ANGEL (A DIVINE MANIFESTATION) to make the Prophet Believer ! Moses and Abraham needed a voice,or a burning bush – but AQK needed only his brain,and devotion to Islam and his Creator !

And inspite of the global vilification and calumny,courtesy the RAW,CIA and MOSSAD – he wavered NOT ONCE,in his devotion to Islam and his Islamic Nation – even at his age !

And this is the model,for all modern Muslims today !

Surely he is in Jannat !

The Tip of the warheads in the “rainfall saturation”,on the Indians,should emboss the name AQK !

If the Persians survive as a nation and a race – it will be due to AQK !