India- BEST SONS OF OUR LAND MASSACRED IN GADRICHOLI BY STATE

MANIFESTATION OF FASCISM. NO STONE MUST BE UNTURNED IN ORGANIZING PROTESTS.

We may disagree with tactical or strategic line or even Maoism but unanimously any revolutionary democrat must recognize the Communist Party India (Maoist) as a revolutionary democratic force. Waging one of history’s most sustained armed movements. We cannot question that they have penetrated very deeply into the lives of the tribals to build up organizational structures. No force has so much embarrassed the oppressive social order of the ruling classes as he very roots as the Maoists. The surgical operation to destroy the base of the Maoists has to be condemned, leaving no stone unturned. It is a manifestation of the neo-fascist social order prevailing. It is simply repetition of history of the massacres in Orissa and in Gadricholi in recent times, taking the Maoist cadres by surprise. Whatever mistakes we must recognize that the C.P.I.(Maoist) is systematically working towards a protracted Peoples War against death defying odds. Countless times they resurrect from the grave like a phoenix from the Ashes, moving like fish in water. In Gadrichli the C.P.I.(Maoist) has deeply enhanced the peoples striking power and delivered many a knockout punch to the enemy.

Today any rights of tribals have been won in Gadricholi only as a result of the sustained struggle of the Maoist squads. Like a surgeon stitching a wound they have confronted contractors, money-lenders and goondas who were patronised by the landlords and politicians. Adivasis or tribals toady in India, remain deeply discriminated even from the peasantry. The Maoists have set up alternative schools and hospitals for the Adivasis, The Ruling classes gave many a deaf ear or no heed to many of the genuine grievances of the Adivasis. Land reform was not democratically undertaken nor were minimum wages paid.

We may not agree with the line of people’s war as a strategy, disagree with the methods in terms of practice of mass line, excesses, and be critical of weakness of democratic functioning, but still recognize that state repression or violence is our main enemy. Maoist violence is in response to that with many an Adivasi enrolling the ranks of the Peoples guerrilla Army. It has also drawn sympathise from many an Adivasi worker in the adjoining mine areas to the forests.

All the martyrs are morally amongst the best sons of our land, considering til their last breath they have fought for liberation. Milind Teltumbde 's martyrdom should be inscribed in golden letters. He was the younger brother of Anand Teletumbde who is now languishing behind jail bars, originally working as a union leader of mine workers.

I would love readers to refer to the chapter in Maoist Road-Gates of Heaven, on Gadricholi, which has a detailed account of the socioeconomic conditions prevailing. It summarise how semi-feudalism is so deeply penetrated in Gadricholi, the marginalization of the tribals and the impact of the work of the Maoists in sowing seeds to flower.

The Maoists undertook the action to avenge the massacre they suffered in March wnen four of their cadre was assassinated, given poison in the meal. However, the authorities covered it up as an encounter. They left a note claiming that the Bhotka family was responsible.

With death defying courage in Mardintola in Dhanera they held the security forces to bay.

The manner the massacre was undertaken was like a mere combing operation, like a tiger leaping from an ambush on its prey. It is proof that the Maoists have hardly properly insulated themselves to counter the security forces and the intelligence is deeply penetrating their network. No doubt we must respect the intensity and relentlessness with which they have challenged the security forces. I strongly feel the party needs to make a review of how the security forces are infiltrating their secret structure and rectify defects in military line.

Sadly, in recent times journals like 'Frontier Weekly ', Intellectuals like Sumanta Banerjee, groups like C.PI.(Marxist Leninist)Red Star and blogs like ‘the Wire’ class the Maoists as terrorists or roving bands. Whatever praiseworthy work Countercurrents blog does it evaluates the Maoist movement with terrorism. They fail to recognise how the Maoists are confronting Neo-fascism so seriously, whatever aberrations. To me it is un-Marxist to brand the C.P.I.(Maoist) as a terrorist group. We must confront the trend in the Indian civil liberties camps that labels Maoists as anarchists:

I was overjoyed to see C.P.I. (M.L) Class Struggle led by Viswam and C.P.I.(M.L)) New Democracy led by Yatinder Kumar pay a martyrdom homage to latest Central Committee leader, Ramakrishna alias Akkiraju Haragopal, I am looking forward to militant protests by the Democratic Front against Operation Greenhunt of Punjab, which has undertaken such creditable work in recent times’ deeply miss blog ‘Democracy and Class Struggle’ that unanimously upheld the resistance waged by the C.P.I.(Maoist).

With death defying courage in Mardintola in Dhanera they held the security forces to bay. I am convinced they have the potential to avenge this attack and their reservoirs still have vast resources, The grave condition of the masses will play a firm role in the survival of the Maoists. and new lotuses will bloom.

Al democrats must be sympathetic to the bandh called on November 24th.

The second in command for the most secretive revolutionary party, the CPI Maoist, Prashant Bose aka Kishan Da was arrested by Jharkhand police, according to sources on Friday.

Kishan Da, is one of the senior most maoist leaders and was the chief of the Maoist Communist Centre of India (MCCI) before it merged with the CPI-ML (People’s War) to form the CPI (Maoist) in 2004. He was one of the ideologues, who oversaw the reunification of the revolutionary forces, that led to formation of the most-dreaded Maoist outfit CPI (Maoist).

Kishan Da’s wife Sheela Marandi, another senior most leader of the Maoist party and the only women member in the decision making Central Committee (CC) of the CPI (Maoist) was also arrested along with him, sources said.

Such arrests are nothing short of illustrating the proto-fascism prevalent in India.

I expect significant qualitative protests in cities like Kolkata, Delhi Hyderabad and districts p of Punjab of front s of democratic Organisations.

Below I am reproducing some notes in Chapter ‘Maoist Movement and Socio-economic zones’ by Amit Bhattacharya. Which is most insightful work. No doubt I disagree that they are in the process of forming a base area or doing complete justice to mass line. We should adopt a balanced vie win light of lack of sunjective forces for undertaking armed struggle. The Maoist practice has many similarities and dissimilarities to that of the Chinese Communist Party under Chairman Mao, but one must respect the variable factors in Chin and India.

NOTES FROM WRITING BY AMIT BHATTACHARYA

Significant achievements of Maoists in Gadricholi are healthcare, changes in the Marriage system, changes in man-woman relations, improvement in the living condition of the people, rise of the petty bourgeois class at the village level, changes in the relations between landlords ,landless farmers and agricultural labourers, development in Market and Commercial activities, abolishing of bonded labour and forms of non economic exploitation, economic changes  and changes in rural loan facilities, money lending and bank loans The main achievements were handing over peasants new lands, enabling all new lands to be tilled and installing fundamental changes in land relations. A transformation was initiated in the realm of superstructure in the life of the peasantry. I recommend everyone to read the chapter titled “The Maoist Movement and Socio-Economic Changes: A Case Study of Gadricholi in Maharashtra (1980-2000).

The Maoist squads mobilised farmers with the slogan “land to the tiller’ which ignited the masses to challenge the forest department for rights over agricultural lands .Earlier till 1980, state governments gave pattas for tribal land (land rights)By 1980, issuing of Pattas stopped, 150,000 acres of and in the Etapalli taluk alone in Gadricholi was outside the purview of the patta system. Every peasant was eager to have land rights, which gave them a feeling that they are not windependent and free from exploitation of forest officials. Local political leaders extracted money from the peasants, promising to provided them patas, but they pocketed the money and deceived them.

Before 1980 landlord families inherited a higher social status. They held the posts of police Patel, Bhumyal Shendyal, etc. They controlled the village having absolute say in matters. In case of any problem sbetwen tribal heads or problems related to more than more village, they used to meet in a large gathering and declare judgments.

The mass organisations of the Maoists obtained control over Panchayat martyrs as well as contradictions between tribal heads and people. With meticulous patience the squad members listened to the problems of Adivasi families. Now the poor peasants, labours and middle peasants, asserted themselves over the exploiting classes. With the exploiting classes stepping down from the leadership of the villages, broad sections of the oppressed peasantry, seized power. Amit Bhatachary felt it was similar to what William Hinton described in the ‘Lomg Bow village in Revolutionary China, during the Yenan days.

The spread of the revolutionary movement trapped exploitation. The Maoist called for famine raids during 1989-90. People rose to the hour by attacking the house of Sala Kanakaya. Tremors were created in the camp of the Sahukars. However the party allowed normal traders to continue with their business, but with adopting preventive measures to curb the greed for unlimited profits. 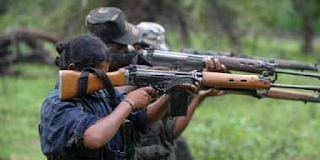