RED SALUTES TO BELOVED COMRADE RAJ KISHORE WHO SOWED SEEDS OF REVOLUTIONARY CULTURAL MOVEMENT IN ENABLING MANY A LOTUS TO BLOOM.

Comrade Raj kishore left us at 2 in the morning on December 22nd in his village Champaran., battling illness since 2014.At time of death he was 89 years. He devoted his entire energy when alive into the liberation of the masses. Even a non Maoist or non Marxist liberal may admire his contribution towards serving the people. Tears literally flow in my eyes when I recount the moments I spent with Comrade Raj Kishore. The minutes may have been very minimal, bit still most memorable and poignant. I can never forget his warm heart and grit on his face. He persuaded me not to be diverted by spiritualism, stressing that revolution was the only true road towards liberation. I also can't forget the affectation he showed towards me in the inaugural RDF Conference in Hyderabad giving me five copies of organ of Revolutionary Democratic Front and stating 'Aap bahut ache ho.' We met first in the All India Peoples Resistance Forum rally protesting 9/11 in October 2001, in Patna. At that time he was the leader of the Struggling Forum for Peoples Resistance and editor of magazine Jan Jwar. The mass organisations oriented towards the Maoist Communist Centre faced the severest bout of repression. Still Raj Kishore expressed confidence and optimism and with great venom condemned the American agression after 9/11. Raj Kishore sowed the seeds of the revolutionary Cultural Movement in through the Krantikari Budhijibi Sangh, pursuing the trend of the Maoist Communist Centre. 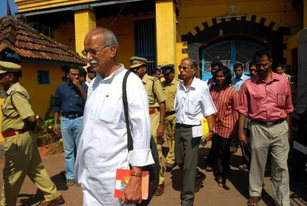 With most sensitive touch, iron determination and meticulous insight he steered all the revolutionary forces and classes and knit them into a single organisation. Some of the finest writings by intellectuals were produced under Raj Kishore's tutelage projecting how the peasantry was entrapped by the forces of semi-feudalism and caste hierarchy and how women were still enslaved. Plays were written portraying ho w medieval landlordism was still an integral part of the system and projecting how the Chinese revolution and Mao thought was still relevant. Few writers of more incisively defended the ideology of Mao Tse Tung. He was one of the major architects of the All India League for Revolutionary Culture in 1983 in ,which was a historic event in the Indian revolutionary Movement. Here mass organizations united belonging to the trends of the C.P.I.(M.L)Peoples War and Maoist Communist Centre I can't forget the close relations he had with comrades like Varavara Rao,Sanober of Maharashtra, etc.

He dipped his pen in Jan Jwar to defend the armed resistance waged by the Maoist Communist Center through Krantikari Kisan Commitees to deliver a shattering blow to the armed senas of the upper castes portray the mass programmes of the fronts of students, youth, peasants and artists as well as defend Maoism after the fall of USSR. Raj Kishore unlike many in the Revolutionary Maoist contingent, defended Stalin tooth and nail .Few intellectual so illustratively defended the Chinese revolution and it's achievements on the 50th anniversary in 1999.Few more artistically portrayed the Chinese Red army and Mao's teachings leading the Chinese Revolution. Raj Kishore also through publications disseminated many of the teachings of Marx, Lenin and Mao. Raj Kishore inspired the formation of the Revolutionary Students League, the first student organisation in which emulated the line of the Andhra Pradesh Radical Students Union. Comrades like Raj Kishore enabled the mass revolutionary movements to move with the flow of water, in spite of facing the most hazardous obstacles. In 2005, after formation of the Revolutionary Democratic Front with the merger of All India Peoples Resistance Form and Struggling Forum for Peoples Resistance Raj Kishore was appointed secretary. of the newly formed front. It was formed as a platform to defended the anti imperialist and anti-feudal movements. No mass front contributed in such magnitude to defend the revolutionary movement against proto-fascism or give solidarity to the armed resistance struggles. Most courageously it challenged the autocracy of the Indian state in Kashmir and forged a front with organisations struggling for the liberation of Kashmir.A most significant protest was supported against death sentence awarded to Kasab in 2013 in Delhi.The RDF was a precursor to the Commite for the Release of Political prisoners ,headed by Amit Bhattachrya and late Gursharan Singh.It sponsored or gave solidarity many a platform to confront autocracy, assisting oppressed sections to organise themselves.

Raj Kishore as a leader left no stone unturned in garnering all the democratic forces to challenge opression on Muslim minorities, Operation Greenhunt in challenging the American war mongering policies and casteist oppression. With great fortitude he led the Revolutionary Democratic Front to stage it's inaugural conference in which was an event of historic significance. In spite of facing the hurdles of unofficial ban the cadre all around the country in areas like Jharkhand, Uttarkhand, , Telengana etc staged state level conferences. The Conference was attended by over 2000 delegates from 11 states. Raj Kishore played an instrumental role in rallying fact finding teams in Singur -Nandigram and later in Bijapur in Chattisgarh.His leadership turned a spark into a prairie fire in waging protests against the repression unleashed by the Commando forces, particularly in West Bengal, Orissa, Jharkhand and Chattisgarh. He played an important role in public meetings staged to condemn the murders of Azaad in 2010 and Kishanji in 2011. Raj Kishore was the editor of Jan Pratirodh,which flashed it's pages portraying the genuine mass struggles in all spheres, and published many an article condemning Brahmanical fascism. Raj Kishore as leader of RDF, also played a laudable role in the movement to release political prisoners framed, particularly on Maoists and Muslim activists. It was remarkable that in spite of facing state repression at it’s hardest point, revolutionary democratic forces devised new forms of struggle and organisations to project their politics. Raj Kishore inspired organisations like Bhagat Singh Chatra Morcha and Inquilabi Chtra Morcha in Uttar Pradesh,to confront communal fascsim and forces in and . Sadly today the Revolutionary Democratic Front, is unofficially banned in and formally banned in , Jharkhand, Telengana, Andhra Pradesh and Orissa. Sad that the backbone of the RDF has been broken in the last decade, and it is now defunct. In his memory I would love well wishers to read past issues of Journal 'Jan Jwar' and ‘Jan Pratirodh’ ,which shimmer the flame of revolutionary resistance as well as the report of the 2012 Revolutionary Democratic Front conference, which was an example of ship steering itself facing a storm. To me Raj Kishore was one of the most astute defenders of Maoism and revolutionary movement ever, amongst cultural leaders or intellectuals.

Comrades like Varavara Rao and Venugopal Rao held Raj Kishore in the highest esteem or even Ravunni from Kerala,Ritesh from Utar Pradesh and Vernon Gonsalves, Shoma and Arun Fereira of . Significant that the RDF constituents flag still flutters in states like Kerala and . In it's own right I regret that Raj Kishore could not completely extricate himself from left sectarianism with regard to building broad based democratic mass movement and mass organisations and left adventurist military line. He could not continue the legacy of the erstwhile All India Peoples resistance forum in building broad based movement upheld left sectarian approach of calling for 'Boycott of Parliamentary elections. ‘It is weakness that the Revolutionary Democratic Front could not survive or revive itself with proto fascism at it's boiling point. Significant criticisms were made by comrades of the erstwhile All India Peoples Resistance Forum on it’s defects towards turning into a genuinely revolutionary democratic base.