For many of us this is a significant date in history. We have both written many articles on Mao Tse Tung for this site and I feel this article is a good summation of his life. -Steve Otto

CHAIRMAN MAO TSE TUNG DID MORE TO SHAPE THE DESTINY OF ANY NATION EVER AND TOOK MARXISM LENINISM TO HEIGHTS UNEXPLORED. THE MOST IMPACTFUL REVOLUTIONARY AND GREATEST MARXIST OF HIS TIME.

On December 26th we celebrate the 128th birthday of Chairman Mao Tse Tung. His impact on the world people was like a red torch illuminating every sphere of the globe. No revolutionary or Marxist of his time exhibited creativity in such a magnitude or transcended such unexplored regions making path breaking contributions. He shaped the destiny of nations or people more than any leader in the last millennium. It was Mao Tse Tung who elevated Marxism Leninism to a higher stage in every sphere, taking it to new height. No Marxist revolutionary after V.I. Lenin applied Marxism so creatively, at every juncture faced, taking mass line of Leninism to unexplored regions. From the days of 1927 in the Chingkangshan mountains, the Long March in 1935, the anti-Japanese War of 1937-45, the 1942 rectification movement the 1945-49 civil war, the Socialist Education Movement, the Great Leap Forward, the Socialist Education Movement and finally the Great Proletarian Cultural Revolution from 1966-76, he applied Marxist-Leninist dialectics and mass line, at a scale unparalleled. Mao took Marxist spirit of self-criticism, challenging conventional methods, spiritual awakening and revolutionary democracy to . The great humility of Mao was illustrated throughout his life from submitting to the majority from the 1930's under Wang Ming ,to accepting Liu Shao Chi as head of state in 1956 and doing his utmost to eradicate his personality cult which was greatly elevated by Lin Biao or rebuking even his own wife Chiang Ching in the Cultural Revolution. The salary he received and most simple house he resided in, is another ideal example. With utmost discipline Mao submitted to the collective at every stage. At an international level he never displayed a big brother attitude when addressing leaders of Africa, Latin America or their parts of . 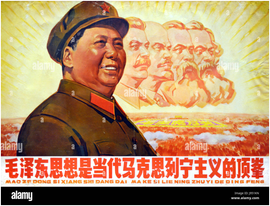 The salary he received and most simple house he resided in, is another ideal example. With utmost discipline Mao submitted to the collective at every stage. At an international level he never displayed a big brother attitude when addressing leaders of Africa, Latin America or their parts of . One of Mao's remarkable contribution was probing into psychology by undertaking thought transformation, which reformed landlords or reactionary intellectuals. Even in the period of the Chinese revolutionary war, he delved into the psyche of the red army soldiers, refuting feudal ideas or customs to the very core. Sadly today his reputation is torn to pieces by the international bourgeoisies who are leaving no stone unturned in projecting Mao as a demon It is part and parcel of the conspiracy waged against Marxism, globally and patronising globalization. Works on Chairman Mao. A very positive biography is also written by Lee Fegion, where he sums up how Maoist China promoted decentralization and revolutionary democracy, making unprecedented strides in literacy, agriculture and health. Hugh Purcell has written a very illustrative pictorial biography which projects how Mao practiced persuasion in place of force or coercion. In Purcell’s view Mao was a progressive dictator. He is critical of excesses or methods of terror but praises the creativity of the production methods.

Purcell felt Mao took revolutionary democracy to a higher regions than in . Very judiciously he portrays ‘Mao and the People’s Communes” as well as ‘Mao and the People’s Will.” William Hinton portrays the protracted resistance Mao launched against the landlords from the 1940's itself and how genuine democratic revolutionary power was built. In Fanshen he describes how land was distributed to the peasantry while in 100 Days of War covers how political power is captured in . Bob Avakian most methodically explains how Mao enriched Leninism in every sphere. Charles Bettlheim most elaborately reflected how democracy was elevated to a pinnacle in production methods in the Cultural Revolution with revolutionary committees supervising factories. Edgar Snow revealed Mao's most creative leadership to steer famous victories against the enemy, having firsthand experience with the Comrades and Mao. He vividly illustrates the democratic practices and heavy penetration of the red army in the day to day lives of the people. Bob Avakian's work ‘Mao Tse Tung’s Immortal Contributions” is classical, most dialectically summarizing how Mao was the greatest Marxist of his era. He projects Mao's contributions in philosophy and political theory It is reflected how teachings of Mao are an integral part of those of Lenin and Karl Marx. The book illustrates the very subtle aspects of all stages from the pre-revolutionary period to the Cultural Revolution. He covers Revolution in Colonial Countries, Revolutionary War and Military line, Political economy Economic policy and Socialist Reconstruction, Philosophy, Culture and the Superstructure, Continuing the Revolution under the dictatorship of the proletariat and why Mao Tse Tung was the greatest revolutionary of his time. The introduction in italics of all the Chapters are most lucid and methodical.

In every chapter he dealt with how Marx and Lenin tackled all those aspects and how Mao's teachings and practice crystallised them to a new height. in a most symmetrical manner. To me of most importance is the chapters on Revolutionary war and military line, Revolution under dictatorship of His notes are most insightful on Fundamental principles of Mao’s military line, Economic policy in liberated areas, Two Roads after Liberation, Learning from Negative experience of Soviets, Theory of Knowledge Universality and particularity, Cultural Revolution and he Continuous Struggle, Chinese analysis of Joseph Stalin, Cultural Revolution, All –round dictatorship of the proletariat, Magnificent achievements of the Cultural Revolution, Contribution of Mao Tse Tung. Avakian feels that Mao towards the end was unable to check the trend that made the CCP treat the as the greater danger and treat the Chinese Revolution as a virtual prism for all nations to evaluate revolutionary line. Arguably a ewkness of this book is inadequate respects to mass line. In recent times most evaluative writings have come from Moba Gao, Dang Hongpin, Joseph Ball, Pu Yo Ching and Jiang Honshing. Ball most analytically refutes the lies of the Great Leap Forward killing millions. The weaknesses of biographies by Stuart Schram[1] and Dick Wilson are that they appreciate only the nationalistic contribution of Mao, and not in establishing proletarian democracy. They are harshly critical of the Great Leap forward. portrays Mao as a leader waging struggle for personal power. I credit Schram for touching on Mao’s contribution towards undertaking thought reform to mould thinking and crediting Mao for discovering an Asiatic form of Marxism .Wilson most illustratively portrays Mao’s contribution in shaping the revolution in the Long March and later periods like anti-Japanese and Civil War. He is also critical of CPC looking at future of world revolution only through Chinese experience. Nevertheless he praised the building of Communes, the methods of undertaking land reforms the three antis and five antis campaign, confronting corruption and the thought transformation campaigns. However he does not do justice to as a Marxist in the Cultural Revolution or to the 2 line struggle waged within the CPC, terming the red book as the equivalent of a ‘Koran.’ I would love readers to study Transformation of China 1840-1969 by Amit Bhattacharya. It most precisely and concisely summarizes history of and Contribution of Mao Tse Tung. It delves how in so many junctures Mao elevated Marxism-Leninism to a new height whether during the Long March, the civil war, the Socialist transformation, the Great Leap Forward or the Great Proletarian Cultural Revolution. The distinct features of Mao 's theories and practice from Stalin are projected. Bhattacharya does great justice to Mao's leadership in the Long March to the Tsunyi conference, his pioneering formation of Communes and initiating first ever Cultural Revolution.

[1] I would like to ad here that Schram was critical of those who tried to lump Mao in along with Adolf Hitler and Stalin as one of the world's worst mass murderers.  Schram pointed out the deaths under Mao were not part of campaigns designed to kill people off. He said the deaths that occurred were mostly unintentional rather than part of a pogram. -note by Steve Otto