I recently came across this article by the Communist (Maoist) Party of Afghanistan, (C(M)PA) about a May Day statement for 2018. I noticed that I had a hard time finding any May Day Statements from this year. I was surprised that the usual groups that sign such statements never came up with one. More important the C(M)PA article makes the claim that several Maoist[1]/ Gonzaloist[2] groups were responsible for preventing a May Day statement. Here is an excerpt from the article:

The article that C(M)PA put together is very long and complicated. It contains a lot of deep analysis, but unfortunately I strongly disagree with some of its conclusions.
There were several different issues raised in the document, including an analysis of , as an imperialist power, a ranking of some of the top imperialist world powers, the possibility of re-establishing the Revolutionary International Movement (RIM) or something like it. I decided to focus on C(M)PA’s denunciation of the “Gonzaloist” parties, specifically eight Gonzalo Parties from :

“The Revolutionary Internationalist Movement at its 1993 Expanded Meeting affirmed the international acceptance of Marxism-Leninism-Maoism. Despite that we are far away from its absolute consolidation, far away.
C) At this moment claiming a further evolution of Marxism-Leninism-Maoism is baseless, whether these claims are the revisionism of “Prachanda Path” and “Avakian’s New Synthesis” or the deviationism of “Gonzalo Thought.” Our party has always emphasized that premature assertions such as Gonzalo Thought, Prachanda Path, and the Avakianite New Synthesis are historically responsible for the collapse of RIM. Avakian’s New Synthesis at the level of post-MLM revisionism carries the primary burden, Prachanda Path at the level of Prachanda’s revisionism is secondary, and Gonzalo Thought is the third deviation that bears the historical responsibility for this collapse. Although the first and second errors have done their damage and then pursued their own affairs, the third error is continuing to play a negative historical role and was even behind the composition of a joint international statement in celebration of international workers day to promote sectarianism.
Therefore, it is necessary that––alongside the principled theoretical, ideological and political struggles based on MLM against Avakian’s New Synthesis and Prachanda Path revisionisms––a struggle should also be waged against the deviation that has emerged as Gonzalo Thought. The C(M)PA is no longer obliged to keep the struggles against the latter internal but deems it totally necessary to begin carrying out such a struggle at the international level.”

I have mixed feelings about Gonzalo Thought. I have my own criticism of Gonzalo Thought. But I won’t take part in any "struggle against Gonzalo Thought." I don’t consider myself to be an outright Gonzaloist. I see myself as a Maoist, influenced by more than just one tendency. There are those who consider Gonzalo to be the “fourth sword“—a new higher developed version of Maoism. I don’t go that far.

I may be considered a generic Maoist. But I’m not alone. There are others like me. I do admire Gonzalo and what he accomplished during the civil war in . Because of that I feel that the Gonzaloistic ideology is not without Merit. Gonzalo accomplished a lot in . He is not dead yet, as with other leading Marxist tendencies. Mao developed his philosophy in his struggle against the Japanese and the Kuomintang and after he took power in 1949 until his death in 1976. He lived most of his life in the middle of the 20th century. Gonzalo on the other hand is still alive. His theories were developed between the 1960s and 1992 when he was captured. Since he is still alive, he has the ability to ad or change his theories. Gonzalo is the only major theoretician still living. He has lived most of his life in the 20th century while he has survived to live in the 21 century. So far there are no other major theoreticians alive today who are responsible for a Marxist tendency. In many ways Gonzalo still has time to develop his philosophy and I believe he needs to develop it further before we can declare Gonzalo Thought to be the next development after Mao. I don’t agree that Gonzalo Thought was responsible in any way for the break up of RIM. Avakian was responsible for that, not only his New Synthesis, but also his changing relationship with other RIM members.
I am totally against carrying out a struggle at the international level against the Gonzaloists, or any level of struggle, including local.  My blog has supported them, giving them a voice here. I plan to continue to do that. That doesn’t mean I will never criticize them, but it will be constructive criticism and not attacks. I have been critical of their attacks on revisionist Marxist parties and I think that people’s war can not be carried out everywhere. That would almost be impossible here, in the , under present conditions, although that could change in the future. I make these criticisms not to attack Gonzalo Thought but in hope it can be changed.
There are many Maoist persons and groups who do not like the Gonzaloists. One of the complaints against them is that they are dogmatic and C(M)PA accuses them of sectarianism. There is some truth to that, but carrying out a campaign against them will be even more dogmatic and sectarian in itself. I have tried to oppose all sectarian campaigns against other Marxist-Leninist organizations, at least to the point where we can occasionally work with these other factions. I think it is confusing to the less educated public to wonder why all these factions have to fight against each other. We need to make every effort to bring together the various factions to appose imperialism. I may be theoretically opposed to revisionism, but the real enemy is imperialism and I think we need a clear focus on that. The imperialists can come together to oppose the left. The left needs to come together to oppose the right.
The C(M)PA has expressed a desire to create an international movement similar to the now defunct RIM. It is a good idea, make no mistake about it. But we don’t need a factional war against a sub grouping within the Maoist movements. 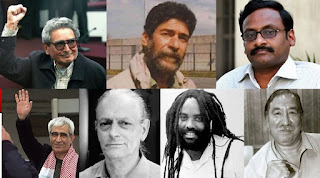 
Many faces of Marxist-Leninism.