Ranking amongst the most creative writers is Charles Bettlheimm who justified Mao’s transcending of regions unexplored in production relations or revolutionary democracy of the working class. Practically his was arguably the best illustration of how Mao had taken Leninism to a higher stage within the factories. Quoting Charles Bettleheim in ‘Cultural Revolution and Industrial Organisation in China “The Great Proletarian Cultural Revolution thus represents an ideological and political struggle the effects of which bear both on the economic base and on the superstructure, destroying the old social relationships and giving rise to new ones. The very fluctuations of the struggle which unfolded during the Great Proletarian Cultural Revolution evidence the degree to which its outcome depended both on the mass movement and on its correct orientation by a revolutionary leadership.

“At each stage of the Cultural Revolution, the adherents of Mao Tse-tung's revolutionary line had to accomplish an enormous labour of discussion. At the outset, for instance, it took several months for the workers to rebel against the prevailing methods of management and the division of labour and against the diehard supporters of the existing relations in the factories. It was only gradually, through the give and take of prolonged discussion, that they began to realize that the old relations were obstructing progress along the road to socialism. When I visited China in 1967 the members of various revolutionary factory committees told me that during its initial stages they believed the Cultural Revolution to be concerned only with literature and the arts, and that they had distrusted the critics of the situation in their own factories. Eventually they came to understand that the prevailing conditions in the factories had to be changed before further advances along the road to socialism could be made. “ Later, when confronted with the task of elaborating new relations, the workers were often at odds about how to interpret the slogans of the revolutionary line. Months and even years of discussion and struggle were required to achieve the unity indispensable to the success of the Cultural Revolution.[3] Through discussions and struggles involving millions of workers and vast sections of the population, a new road was opened up in the struggle for socialism. There is no precedent for such an attempt to transform social relations. It constitutes a decisive and permanent achievement, as decisive and permanent as any scientific or social experiment which discovers new processes or new objective laws.”

Part1 discusses the essential features of the changes that have occurred both in the management of industrial enterprises and in the division of labor within these enterprises. It is largely an account of my conversations with the members of the revolutionary committee at the General Knitwear Factory in Peking.

Part 2 is a relatively brief outline of the guiding political principles of Chinese planning. Although these principles were operative before the Cultural Revolution, their application was then frequently frustrated by the "centralizing" tendency abetted by Liu Shao-chi's line.

Part 3discusses the significance, principles, and perspectives of the main thrust of the Chinese Revolution -- the gradual elimination of the distinction between performance tasks and administrative tasks, between manual labour and intellectual labor, and between town and countryside. This is the road outlined by Marx and Engels.

Part 4 discusses the political principles that were implemented during the Cultural Revolution and advances some theoretical conclusions regarding the revolutionizing of the social relations of production. JOSEPH BALL WRITING ON GREAT LEAP FORWARD- ‘In the Great Famine Frank Dikötter alleges that the Great Leap Forward starved the Chinese masses. This was a complete distortion of history with the book literally twisting facts.’ Joseph Ball most effectively countered the lies of Dikottter, hitting back at the very root. Quoting writer Joseph Ball on the Great Leap Forward

“To read many modern commentators on Mao’s China 4, you would get the impression that Mao’s agricultural and industrial policies led to absolute economic disaster. Even more restrained commentators, such as the economist Peter Nolan 5 claim that living standards did not rise in China, during the post-revolutionary period, until Deng Xiaoping took power. Of course, increases in living standards are not the sole reason for increases in life expectancy. However, it is absurd to claim that life expectancy could have increased so much during the Mao era with no increase in living standards.’ ‘For example, it is claimed by many who have studied figures released by Deng Xiaoping after Mao’s death that per capita grain production did not increase at all during the Mao period. But how is it possible to reconcile such statistics with the figures on life expectancy that the same authors quote? Besides which these figures are contradicted by other figures. Guo Shutian, a Former Director of Policy and Law in the Chinese Ministry of Agriculture, in the post-Mao era, gives a very different view of China’s overall agricultural performance during the period before Deng’s “reforms.”

It is true that he writes that agricultural production decreased in five years between 1949-1978 due to “natural calamities and mistakes in the work.” However he states that during 1949-1978 the per hectare yield of land sown with food crops increased by 145.9% and total food production rose 169.6%. During this period China’s population grew by 77.7%. On these figures, China’s per capita food production grew from 204 kilograms to 328 kilograms in the period in question.’ ‘Even according to figures released by the Deng Xiaoping regime, industrial production increased by 11.2% per year from 1952-1976 (by 10% a year during the alleged catastrophe of the Cultural Revolution). In 1952 industry was 36% of gross value of national output in China. By 1975 industry was 72% and agriculture was 28%. It is quite obvious that Mao’s supposedly disastrous socialist economic policies paved the way for the rapid (but inegalitarian and unbalanced) economic development of the post-Mao era.’ ‘There is a good argument to suggest that the policies of the Great Leap Forward actually did much to sustain China’s overall economic growth, after an initial period of disruption. At the end of the 1950s, it was clear that China was going to have to develop using its own resources and without being able to use a large amount of machinery and technological know-how imported from the Soviet Union.’

‘Although problems and reversals occurred in the Great Leap Forward, it is fair to say that it had a very important role in the ongoing development of agriculture. Measures such as water conservancy and irrigation allowed for sustained increases in agricultural production, once the period of bad harvests was over. They also helped the countryside to deal with the problem of drought. Flood defenses were also developed. Terracing helped gradually increase the amount of cultivated area.’ Great Achievements of Mao Mao’s conception of 2 line struggle thwarted the bid of Liu Shao Chi and others to deny the existence of 2 line struggle within the party ,to deny the difference between the proletarian line of upholding Marxism ,and the various bourgeois lines which had penetrated the history of the CPC. Mao, like Lenin, recaptured Marxism from the hands of the bourgeois intellectuals and returned it to the working class. George Thomson stated that Moa cleared the road from deception, confirming the basic principals of scientific socialism and enabling the new generation of revolutionaries to gain access towards them. Like other great leaders Mao, defended Socialist theory from revisionists and took nothing for granted from Marxism-Leninism, analysing it in light of the Chinese Revolution. The Peoples Communes, the Socialist Education Movement, the Cultural Revolution were all undertaken by the people’s initiative, tapping the creativity from above and not imposed from above by the bureaucracy. George Thomson gave specific reference to “On Contradiction ‘ and “On the Correct handling of Contradictions among the People.” He summarises Mao’s insistence on distinguishing between antagonistic and non –antagonistic contradictions-unlike Stalin. Mao also highlighted the malleability between antagonistic and non –antagonistic contradictions. One of the most enriching aspects of Mao thought was its stress on the human element, and revolutionary transformation of the individual, to give birth to the new man. Socialist morality was restored to the movement, unlike Revisionist Russia. Quoting Bob Avakian in Mao Tse Tung’s Immortal Contributions

“Mao consistently argued that the Universal principles of Marxism Leninism must be applied and that the basic lessons of the October Revolution in Russia must be upheld-especially the need for the seizure of power through the armed struggle of the masses and for the leadership of the revolutionary party of the proletariat, but these had to find different application in China’s concrete conditions than they had in Russia. It was on this basis that, as part of leading the struggle for the seizure of nationwide political power in China, Moa made some of his most important contributions which enriched and developed Marxism-Leninism especially in the formulation of strategy of New Democratic Revolution, in military line and thought, and in laying the basic groundwork of his development of Marxist philosophy. If it was true that Mao could not have led the Chinese Revolution, in its first stage to victory, to the founding of the people’s republic, without challenging and breaking with powerful convention sin the International Communist Movement, this was still more the case with regard to leading the combined advance in the Socialist stage, after the Peoples Republic was founded. This was so in the fields of political economy and culture and it was most definitely the case with the greatest of Mao’s immortal contributions-the basic line and theory of continuing Revolution under the Dictatorship of the Proletariat. Most of all, it is inconceivable that there should have been a Great Proletarian Cultural Revolution in China, an unprecedented event, in the history of the Communist Movement. If Mao had been unwilling to “go against the tide.” not only to fly into the face of the bitter opposition within the Chinese Communist party itself, most especially from powerful leaders of the party, but also to depart from, even violate certain norms which some have come to regard as sacred, in such areas as functioning of the party and its relation to the masses? Of course this is inconceivable. that without such ‘violations’ or developments-of Marxism Leninism, the Chinese Revolution would have scaled the heights it did ,not only making new break throughs on the path to Communism but inspiring, teaching and drawing revolutionaries all over the world toward the same goal. 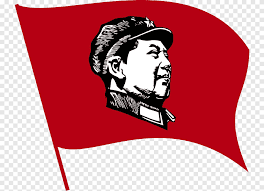