US- Portland, OR is the center of a clash between militias of the far-right and Antifa

By SJ Otto
Last year I as in and I noticed the local news papers had written about the fights between far right-wing groups and the Antifa. There seemed to be a small but steady group of Antifa and they made themselves known to the city rulers.
One article I read was about the town council moving a city council meeting because Antifa had threatened to disrupt it. Both sides accused each other of being unreasonable. The city refuse to meet and discuss anything with Antifa. And Antifa was adamant that their rights of free speech were being violated.
A year later, the city still has far right activists fighting it out with Antifa. According to Yahoo News:

", (AP) — police are mobilizing to prevent clashes between out-of-state far-right groups planning a rally here and the homegrown anti-fascists who oppose them as 's culture wars seep into this progressive haven.
Saturday's rally — and the violence it may bring — are a relatively new reality here, as an informal coalition of white nationalists, white supremacists and extreme-right militias hones its focus on Oregon's largest city as a stand-in for everything it feels is wrong with the U.S. At the top of that list are the masked and black-clad anti-fascists who turn out to violently oppose right-wing demonstrators as soon as they set foot in town.
"It's Portlandia, and in the public mind it represents everything these (far-right) groups are against," said Heidi Beirich, director of the Intelligence Project at the Southern Poverty Law Center, which tracks hate groups. "It's progressive, and even more offensive to them, it's progressive white people who should be on these guys' side."

The far right groups seem to go by various names, including Proud Boy, who made their appearance recently and Patriot Prayer, the name of a group from last year. The opposition on the left is almost always Antifa— short for Anti-fascists. There are a lot of left-wing and progressive groups in . But most of these groups have chosen to ignore the far right militias Antifa is usually about the only group that fights against them.  Some progressives have condemned Antifa for their actions. Other groups just ignore the whole thing. A few cooperate, at leas on some issues.
These conflicts affect a lot of activities in the city. As an example a 5k race, that is planned for August 17, has been moved. Whether the people in like it or not, this battle is set to take place in their community. As stated above, far right groups have focused on because it is a progressive and left oriented town. Therefore it represents all the things that right-wing groups hate.
Whether local activist like it or not, Antifa is probably taking action that might prevent the right-wing militias from just taking over the town and its various institutions. Most Antifa groups or influenced by anarchist philosophy and ideology. For that reason many Marxists don't like them. But as Marxists we need to be looking for ways we can attack the capitalist system we live under. Some of Antifa's tactics might be useful to Marxist organizations. As with anarchist, Marxists need a certain level of militancy. We can't just play it safe. We may need to get our hands dirty from time to time.
At the very least we should not take a position of antagonism or opposition to the Antifa. They do lack discipline and they avoid organization. Still we gain more from them than we may lose by letting them take on the far right militias. Those militias should not get a free ride in any town. They need to be exposed by those who oppose them. Most of all they need to BE OPPOSED.
As the Antifa use various methods of political struggle we can learn from them, both their mistakes and those methods of action that do work. Antifa is doing us a favor by taking on the militias. 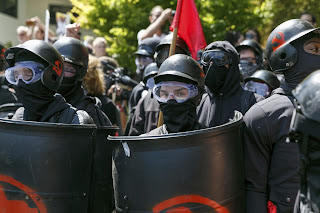 FILE - In this Aug. 4, 2018, file photo, counter-protesters prepare to clash with Patriot Prayer protesters during a rally in Portland, Ore. Portland police are mobilizing in hopes of avoiding clashes between out-of-state hate groups planning a rally Saturday, Aug. 17, 2019, and homegrown anti-fascists who say they’ll come out to oppose them. Since President Donald Trump’s election, has become a political arena for far-right and far-left groups to face off. (AP Photo/John Rudoff, File)